Drivers deterred by Vancouver’s dwindling supply of gas stations could soon get fuel delivered directly to their cars.
0
Oct 23, 2018 6:47 AM By: Tyler Orton

Drivers deterred by Vancouver’s dwindling supply of gas stations could soon get fuel delivered directly to their cars. 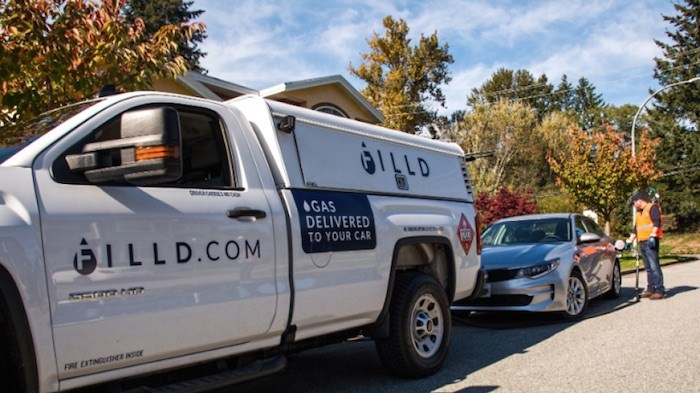 The exact date of launch has not yet been revealed.

The expansion into Canada comes as the San Francisco-based company announced October 23 it’s raised US$15-million from investors in it latest funding round.

Customers use Filld’s mobile app to order a gas-delivery truck to a location during a specific time window to fill up a parked vehicle.

The Metro Vancouver launch for consumers follows a pilot in the city proper last year that filled the tanks of Car2Go’s car-share vehicles.

The new service will be offered to personal vehicles, car-share vehicles and fleet vehicles.

CEO Michael Buhr told Business in Vancouver that the city’s real estate situation makes for a solid market in which to operate.

As land value for gas stations outpace their potential revenue, he said, the number of stations available to drivers is continuing to drop.

“Being able to fuel a consumer’s vehicle, or a fleet vehicle or a car-share vehicle in today’s world is not only challenging, it’s going to get more and more challenging,” he said, adding Vancouver suffers from “fuel deserts” whereby drivers must travel long distances to fill up.

“And we have an opportunity here with how we approach the fuelling business to not only be able to reach those vehicles and fuel those vehicles in a timely manner, but actually [be] able to do it in a far more cost-effective way than they could than if they were driving to a gas station.”

After placing an order through Filld’s app, customers are instructed to leave the vehicle’s gas flap open before delivery drivers arrive to fill up the vehicle and re-secure the gas flap.

Filld will then charge customers $4 per visit in addition to the cost of gasoline.

If there are multiple vehicles in a person’s driveway that require a fill-up, customers will be charged the $4 for the one visit to that location.

Its gasoline costs are pegged to an algorithm the company uses that calculates the average price of gasoline sold at surrounding gas stations.

Buhr described the cost as “the same amount roughly as if you took your car to a gas station.”

A spokesman for the City of Vancouver told BIV in an email that the city’s environmental group asked the company to provide a detailed list of items carried in the delivery trucks’ spill kits, proof of staff training, a copy of its spill management plan, and operational and safety plans that reference reporting spills totalling more than 250 millilitres.

The city said Filld fulfilled those requirements and received a business licence in July 2017.

Parkland USA president Doug Haugh joins Filld’s board of directors as part of the deal.

“As a company in our position, we needed to find somebody who understood regulatory compliance,” he told BIV.

“If you aren’t safe, if you don’t protect your people, and your customers and your environment, you’re not going to be in business very long.”