'They want all that:' Girls becoming more involved in gang violence in B.C.

Girls and women are not immune from gang violence in British Columbia's Lower Mainland. Females often become involved as girlfriends, but experts say they're increasingly active participants, carrying guns and drugs and doing more.
0
Aug 28, 2019 6:49 AM By: The Canadian Press 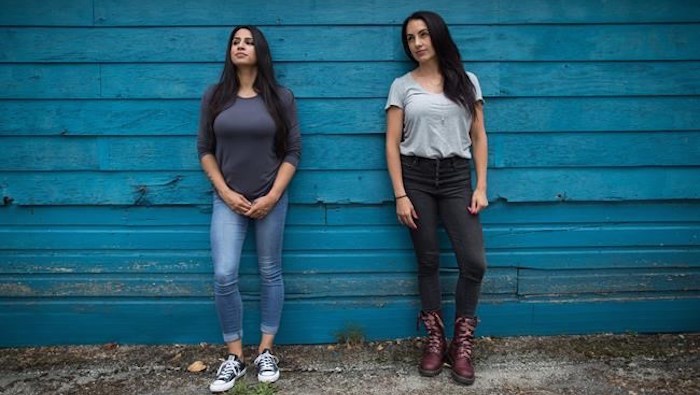 Detective Anisha Parhar, left, and Sgt. Sandy Avelar, who run a program on their own time to try and keep girls out of gangs, pose for a photograph in Vancouver, on Wednesday July 3, 2019. THE CANADIAN PRESS/Darryl Dyck

VANCOUVER — As gang unit officers for the Vancouver police, detectives Sandy Avelar and Anisha Parhar often pull over boys and men in flashy cars with drugs and guns in the glove compartment. But they also meet girls and women in the passenger's seat, toting designer purses and expensive jewelry.

The detectives have noticed that often these females are assumed to be naive bystanders or helpless victims. While that may be true in some cases, Avelar and Parhar are pushing for recognition that many of these girls and women are more deeply involved.

"We don't sit there and say: 'Every girl's a victim. Poor girl. She's going to get targeted. These are the big, bad boyfriends coming in with the tattoos,'" Parhar says.

Girls and women are not immune from gang violence in British Columbia's Lower Mainland. Females often become involved as girlfriends, but experts say they're increasingly active participants, carrying guns and drugs or providing their names for houses, cars, credit cards and phones.

While females sometimes mistakenly believe they're safe from gunfire, they have been killed over the years. Seventeen females have been killed in gang-related violence between 2006 and 2017, according to an analysis by B.C.'s anti-gang agency, the Combined Forces Special Enforcement Unit. Today, prevention programs are targeting girls and women to keep them out of gangs.

Avelar and Parhar launched a program in 2017 to help discourage girls from gang life called Her Time. The program, which is not an official Vancouver police initiative but is supported by the department, educates young women on the dangers of dating gangsters and aims to shed the allure of the lifestyle.

The detectives deliver their presentation in schools, community centres and anywhere else it's requested. They've also teamed up with women who have managed to escape gang life to share their stories.

One woman, who asked not to be identified for safety reasons, says she had a "fantastic" life growing up and never got into trouble. But when she was 20, she befriended a woman who introduced her to work as an exotic dancer.

She met her boyfriend — now her ex — at the strip club. He was a "great guy" in the beginning, she says, but the club attracted shady characters, and soon he was lured by the glamour and status attached to the gang lifestyle. His drug dealing allowed her to quit dancing and live a life of luxury, she recalls.

"I was able to shop seven days a week if I wanted to. I barely wore the same thing twice. We had a beautiful apartment in a very high end neighbourhood of Vancouver," the woman says.

"The fact that someone wanted to take care of me in every which way made me think he was the one. ... Women do stupid things when they are young and in love. I am a prime example of that."

When he asked her to join him on a trip across the border, she happily went along, looking forward to shopping in the United States. She knew he was going to meet someone but she says she wasn't involved in the plan.

The decision changed her life forever. Border authorities searched the car of the man her boyfriend was supposed to meet and found drugs. The discovery led them to the car where she and her boyfriend were waiting, and both were arrested that afternoon.

She pleaded guilty to knowledge of a crime and failing to report it and served eight months in a federal prison.

"My family was heartbroken," she says. "They were of course extremely disappointed in me for getting myself into this situation, as they were never a fan of my ex-boyfriend. Never liked him."

The woman has since rebuilt her life and says a program like Her Time is long overdue.

"I know women who are dead — women who got so deeply entrenched into that life that it cost them their own."

The gang landscape in B.C. is so unusual that when Parhar and Avelar travel to the U.S. or other parts of Canada, officers are often dumbfounded by their descriptions of gangsters' girlfriends. The women may be nurses or lawyers and look like they belong in "The Real Housewives of Beverly Hills," the detectives say.

Gang membership in other jurisdictions is typically driven by poverty and need, but Avelar notes that feelings of need may be relative. In the Lower Mainland, where multimillion-dollar homes and Lamborghinis abound, young girls and women scrolling through Instagram may feel they "need" luxury goods, she says.

The main reasons why girls get involved with gangs include the financial lure, a desire for belonging or recognition, glamour, status and protection, Parhar adds.

While they typically start out as gangsters' girlfriends, they become more entrenched over time, she says.

"Females will be used for proxy. Because they don't have a lot of negative police history or the police are less likely to stop a female driving in a car than the guy covered in chains, she kind of goes under the radar," Parhar says.

Gangs capitalize on this by using women's names to insure vehicles or rent suites, she says. They also use females for "straw purchasing," in which women purchase guns legally, then the gang fakes a break-in, and those guns end up being used in a drive-by shooting, she adds.

Then there's sex trafficking, which has long been a facet of organized crime. Parhar says it's become easier to recruit girls via social media.

"It's a tough time for youth and that's why we're really big on getting that message out," she says.

In nearby Surrey, a group of girls in their early to mid-teens gathers to practice martial arts. The program run by the anti-gang group Yo Bro Yo Girl Youth Initiative aims to keep vulnerable girls away from the lifestyle.

"Everyone's looking to fit in, especially in today's society, with social media, Instagram, Snapchat, everybody putting their best face forward, edited, photoshopped and all that," she says.

"Especially females, it gets them feeling insecure, like they need to keep up appearances ... Once you're straying, there's many paths for you to stray down."

Kaitlin Walsh, 14, moved to the sprawling city from Jamaica two years ago. She says she joined the group because she wanted to learn how to defend herself and protect her younger brothers, and it's helped her build confidence.

"I have the type of personality that is most attracted to people. I'd be talking to people constantly," she says.

"If it wasn't for Yo Bro and me knowing what different types of people there are, there'd be a possibility that I would somehow talk to the wrong people, become friends with them and start doing the stupid stuff they're doing."

She says when she sees girls befriending or dating boys who are involved in gangs, she wonders: "Why?"

"Guys are more open to that because of the masculinity it brings to them, and the friends that it gets them and the cars and everything that comes with it. But with girls, I don't know what they're doing," she says.

"Sometimes I think guys are just using them for random stuff."