Lorenzo Cirillo casts his line into the Coquitlam River to demonstrate fly fishing techniques for The Tri-City News.
0
Jun 24, 2018 10:26 AM By: Diane Strandberg 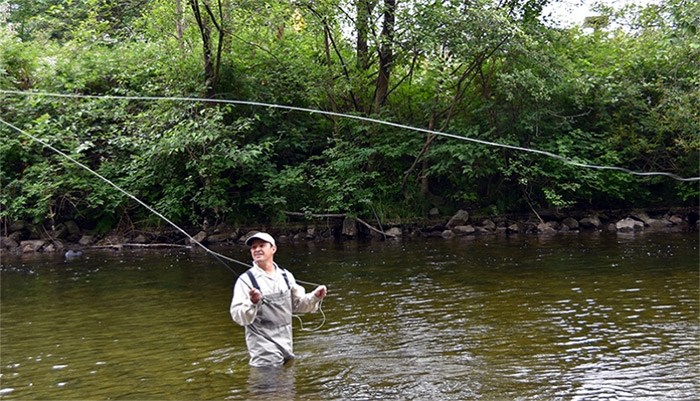 Lorenzo Cirillo casts his line into the Coquitlam River to demonstrate fly fishing techniques for The Tri-City News. The veteran middle school teacher will be moving to Gleneagle secondary this fall and one of the new courses he hopes to teach is Fly Fishing 11. Photograph By Diane Strandberg

A new Fly Fishing 11 course approved by the board of education will have students exchange their laptops, pen and paper for a fly rod and some basic tackle equipment if they sign up at Gleneagle secondary next year.

But don’t think this course taught by veteran fly fisher and educator Lorenzo Cirillo will be a walk in the park.

The program has been developed to meet B.C. curriculum guidelines and gives teens a chance to explore nature, study conservation, learn B.C. fishing regulations and First Nations values, while also reading about famous literary figures who loved to fish.

Along the way, they’ll learn how to cast and tie flies and explore some of B.C.’s most famous fly fishing rivers.

“If there ever was a better time to take care of the environment, I’m not sure when it was,” said Cirillo, currently a Pitt River middle teacher who will be moving to teach at Gleneagle in the fall.

Wearing hip waders and preparing to cast, Cirillo is standing in the middle of the Coquitlam River in Port Coquitlam demonstrating the techniques of fly fishing to a Tri-City News reporter.

Sadly, pollution, in the form of a large ball of plastic wrap is getting in the way of a great photo.

“You could make a case study of [the Coquitlam River] about all the things we have done wrong,” he said.

Cirillo is passionate about his new course, which he developed with learning services coordinator Michelle Ciolfitto to be taught as part of Gleneagle’s COAST outdoor recreation program.

He believes the four-credit elective course could be a model of interdisciplinary studies because it blends environmental sciences with physical education. However, he acknowledges that other schools have similar programs and even Penn State is known for its principles of fly fishing course.

Still, with B.C. a fly fishing destination for many outdoor enthusiasts, Cirillo thinks it will appeal to young people who want to try something a little bit different in their education experience.

Field trips will likely include the Vedder River, where students will learn fly fishing etiquette that isn’t always employed by practioners of the sport, the Skagit River, which was saved from destruction by opponents of the High Ross dam project, and the Squamish River, among others. However, trips will be dependent on water levels, season, fishing regulations, course progress and other issues and could vary from year to year.

Cirillo, who has run a fishing club at Pitt River for a number of years, where students catch, clean and eat black crappie at Whonnock Lake, said his kids love the sport, even if they aren’t always so crazy about the taste of the fish.