This gold and diamond eagle is at the centre of an insurance battle in B.C. court

A major insurance company is fighting back after a British Columbia court required it to make good on a policy covering a gold, diamond-encrusted eagle statue allegedly stolen in Metro Vancouver more than two years ago.
0
Jan 8, 2019 7:07 AM By: The Canadian Press

A major insurance company is fighting back after a British Columbia court required it to make good on a policy covering a gold, diamond-encrusted eagle statue allegedly stolen in Metro Vancouver more than two years ago. 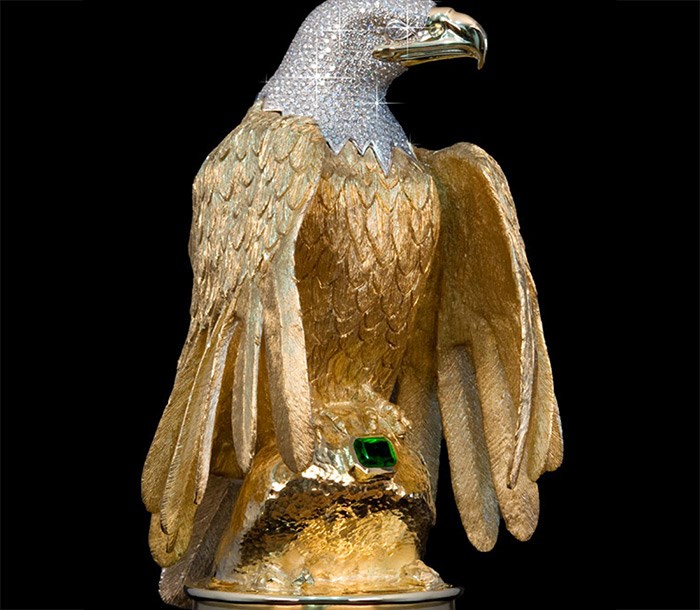 The B.C. Supreme Court issued a default judgment against Lloyd's Underwriters last month, ordering it to pay the plaintiff, Forgotten Treasures International Inc., and its president, Ron Shore, damages and costs for the loss of the pricey statue.

But court documents show Lloyd's intends to return to court in February to ask for the default judgment to be overturned, arguing Shore violated the insurer's conditions.

The court issued the judgment after Lloyd's failed to formally answer Shore's civil suit, but Lloyd's says in documents filed last month that Shore's lawyer was well aware the insurer wanted more detail before filing its notice of response.

Lloyd's says in the documents that its lawyers also urged Shore's counsel to confirm default proceedings were not underway, but the insurer says it only learned of the judgment four days after it had been made.

The insurer says it has "not wilfully defaulted" and is seeking special costs as an indication "a party's litigation conduct is reprehensible."

Documents filed when Shore launched his suit last year show the eight kilogram, solid gold eagle statue studded with 763 diamonds weighing a total of 56 karats was appraised at $930,450 in May 2016.

That was when police in Delta, B.C., reported Shore had been attacked and robbed as he carried the statue and a similar silver one to his car following a presentation about an international treasure hunt he was operating.

The jewel-covered statue and the silver version were prizes in the hunt, which was a fundraiser for cancer research, the statement of claim says.

The treasure hunt involved finding 12 certificates hidden in locations around North America and Europe with the first person to find the clue awarded one of 12 solid silver eagles.

Five of the silver eagles, worth an estimated total of $175,000, had already been awarded at the time Shore was attacked, hit over the head and robbed of the statues that he was carrying in a backpack, his claim says.

The gold eagle was to be sold at the end of the treasure hunt to finance the winner's $1-million prize, say Forgotten Treasure's documents, and the insurance policy for the jewelled bird set liability at $400,000, while liability for loss of the silver statue was set at $53,750.

Documents filed in November by Lloyd's say the policy limits of liability for the articles were $710,000 and $53,750 respectively.

Insurance broker The Hub, which is also listed as a defendant in the suit, alleges in its response that the eagle statues were being transported in a manner Shore "knew or ought to have known was in contravention of the policy."

Lloyd's supports that allegation in a notice of application seeking more information from Forgotten Treasures about its claim.

The policy contained conditions, one of which provided that coverage is excluded unless the insured articles are in the close personal custody and control of the assured and an officer or representative of the assured at all times, says the application.

Shore's claim says he had an associate with him the night the statues disappeared but Lloyd's disagrees, noting in its documents that Shore was accompanied by Tanya Merx, a friend and practising psychologist, who was not trained in security.

"It is also clear from Ms. Merx's statement that she was not with Mr. Shore during the reported mugging; rather, she had driven away from the scene and did not see the reported theft. Therefore, two persons for the plaintiff were not accompanying the insured articles at all times," says the Lloyd's filing.

Shore's claim seeks a ruling that the policy was validly issued and "covered all losses during the policy period."

He is also seeking special, punitive and general damages, including $400,000 for the gold and diamond-covered eagle, and $53,750 for the silver statue.

A hearing regarding the default judgment is set for Feb. 26 in Vancouver.