"You never ruin another artist's work with your throw-up."

A recent photo of a vibrant Vancouver mural covered with graffiti has sparked public outrage on social media.

The mural, entitled "Butterfly Kiss," is located at 1046 Robson Street near the intersection of Burrard Street and was included in the 2020 Vancouver Mural Festival (VMF). Ovila Mailhot, the artist, says the butterfly symbolizes growth and beauty.

"A butterfly goes through a lot of change in its lifespan, and at full growth, it shows its true beauty and colour," writes Mailhot, who is a self-taught Coast Salish artist.

Redditor Urmel20 shared an image of the eye-catching mural to the social media platform Wednesday (March 3), remarking that "Sometimes I hate humans... Isn't there a rule that sprayers never spray over the art of others?"

At the time of this writing, people have commented on the vandalism nearly 200 times, with the firm majority stating that it is cruel and poorly done. Further, several people question whether there is an unwritten rule among graffiti artists against ruining someone else's work.

That said, a number of people say that graffiti doesn't have rules. "Isn't the rule of graffiti is there are no rules?" asks anysecondnow.

Redditor vancouveraffluent adds, "Ah yes, re-interpreting the original artist's creation. You can tell it's art from all the reactionary comments," while Poop4SaleCheap argues that "You never ruin another artist's work with your throw-up." 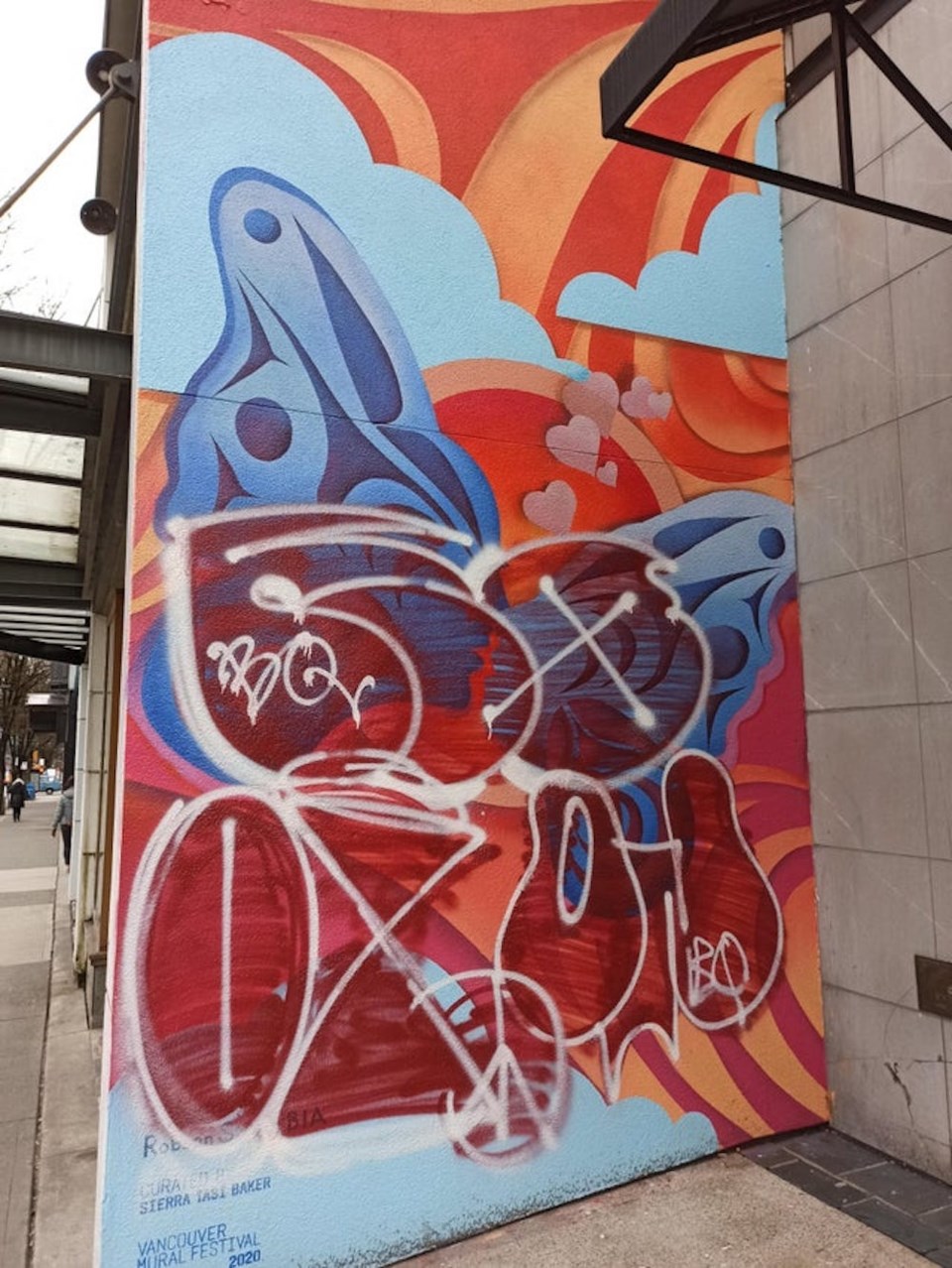 Andrea Curtis, Executive Director of the VMF, tells Vancouver Is Awesome that any mural in the festival is maintained by the organizers for a two-year period. She adds that Goodbye Graffiti will clean up this artist's piece.
"This happens unfortunately frequently," laments Curtis. "There is generally a resurgence of vandalism as soon as the weather starts to get nicer. Especially now when there is little social activity available."

Ovila Mailhot writes in his VMF biography that he has been creating art for five years and was excited to share this piece.

"Wanting to share the beauty of Coast Salish art. Revitalizing the techniques and approach to Indigenous art. Expressing myself using the Salish art elements that have been passed down through generations.

"Using bold, vibrant colours, fluidity and symmetry has been my style and way of expressing myself. I think my Butterfly Kiss design captures this well.”

In response to the news, Mailhot tells V.I.A. that he doesn't understand why someone would do that, but that he's happy the people of Vancouver could see it intact and unscathed for the amount of time it was up.

"Hopefully it can be cleaned up and the people can still walk by it on the street and appreciate its beauty," he adds.