Hastings-Sunrise residents who’ve spent years waiting for the redevelopment of London Drugs’ property on East Hastings at Penticton Street will have to continue to wait — and it’s not clear for how long.
Oct 19, 2019 4:26 PM By: Naoibh O’Connor

Hastings-Sunrise residents who’ve spent years waiting for the redevelopment of London Drugs’ property on East Hastings at Penticton Street will have to continue to wait — and it’s not clear for how long. 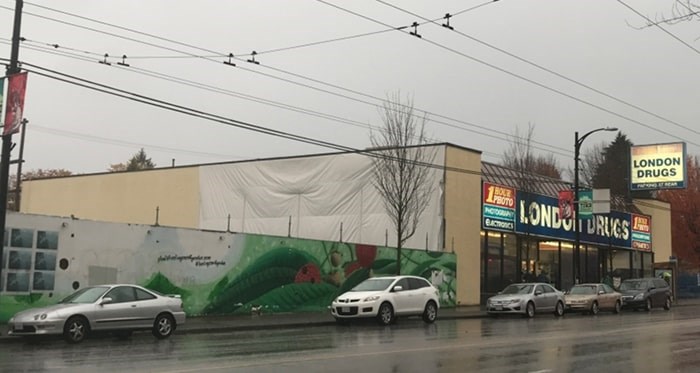 A new development on London Drugs property on East Hastings Street has been expected for years. Photo Naoibh O’Connor

London Drugs owns land from Penticton Street to about a half a block to the west of it. Its store remains open on the sprawling property, while buildings on either side have been knocked down in anticipation of redevelopment.

Project plans have changed over time — it was initially expected to be a mixed-use condo building called “the Alba.” Buildings to the west of the store were knocked down.

But that idea was dropped in 2013 due to poor market conditions.

Eventually, the empty lots were turned into a community garden for a few years.

More recently, Hastings Sunrise Development Ltd., a subsidiary of London Drugs, had been working on a design for a mixed-use rental project.

In late 2016, a vacant building, which used to house a McDonald’s restaurant at the corner of East Hastings and Penticton on London Drugs’ site, was demolished, leaving another empty lot.

In 2017, the community garden was removed and a development application for the mixed-use rental project was expected to be filed in late 2017. That never happened, and the project is in limbo but not yet scrapped.

“The market conditions, city requirements and parking have changed since the original project was envisioned, costed and plans developed,” Wendy Hartley, a London Drugs spokesperson, wrote in an email to the Courier.

Hartley said the city told the company an additional one-metre setback was needed, which resulted in a 990-square-foot reduction to the ground floor of the building. She said it was a new requirement from the original design since the project was envisioned. As a result, the company had to go “back to the drawing board” to see if the project was viable with the new requirement.

“A number of meetings were held, and the city planning department made it clear they would not relax the setback requirement,” Hartley said.

Meanwhile, the city announced, in June of 2019, that it was providing the existing parking lot behind the London Drugs store — city-owned land valued at $17.7 million — for a women-led housing project.

That announcement prompted the Hastings North Business Improvement Association to question ownership of the lot. The BIA indicated neighbourhood businesses and property owners may have rights to it.

The city says it hasn’t found any record of a land purchase by the BIA, but has asked the BIA for a copy of these records and, if found, the city and BIA will discuss how to move forward.

Hartley said the city offering up the parking lot for a housing development “was a surprise, and has created confusion,” given the BIA’s comments about the city’s ability to control the land.

“All of this has caused significant delays, confusion and challenges in understanding what is and is no longer possible in the neighbourhood. We remain committed to the neighbourhood and development, but had to get clarity on a number of these issues before being able to proceed. It is very frustrating for us, as we could have had new homes or rentals available in the market, along with a new store experience for our customers,” she said.

It’s possible a project will go ahead — London Drugs Limited is still leasing property at 2696 Hastings, not far from its existing store, as a potential short-term home should the company get clarification on the future of the development and the impacts of city requirements and parking in the area.

The City of Vancouver told the Courier the application timelines and the scope of the project are determined by the applicant. Once an application is submitted, staff would review the proposal and have the owner hold a pre-application open house to seek comments from the community.