The city continues to see the most expensive rent in Canada.

If you've been searching for an apartment in Vancouver this June, you may have noticed that prices have started to climb.

Vancouver continues to see the highest rent in Canada for both one and two-bedroom apartments as well as an increase in prices for both bedroom types this month over last.

Conducted by Padmapper.ca, the June 2021 report analyzes rental data from hundreds of thousands of active listings across the country. From there, listings are aggregated every month to calculate median asking rents for the top 24 most populous metropolitan areas.

Report authors note that nearly two-thirds of the Canadian cities on its report experienced growing rents again: "The recovery from 2020’s rental market trends seems to have begun since there is a demand that is currently driving up prices."

With the vaccination rate increasing heading into the fall, the report notes that Canadian renters may begin to search for their next apartments again.

Toronto has also experienced an increase in both bedroom types. A one-bedroom in Canada's most populous city has climbed 0.6 per cent to $1,800 this month; two-bedroom apartment prices have increased 0.4 per cent to $2,320.

Burnaby is now the third-highest market in Canada, although one-bedroom apartment prices remained flat at $1,700; two-bedroom prices increased 0.9 per cent to $2,270.

Barrie, Ontario has dropped down to the fourth-priciest market in the country with one-bedroom rent falling 4.6 per cent — the largest monthly decline of any city in the nation — to $1,650. In contrast, two-bedroom rentals increased 2.8 per cent to $1,830. 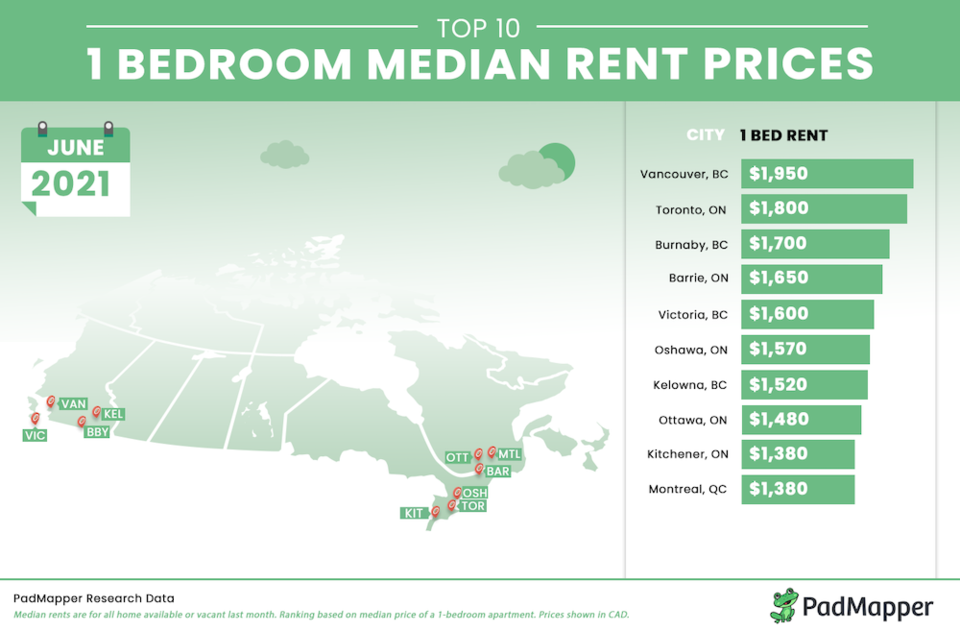 The report is based on all data available in the month before publication. Any data that is reported does not include short-term or Airbnb listings.