After the landing, Vancouver’s H.R. MacMillan Space Centre will be hosting an online panel of experts to discuss the events of the day
Feb 17, 2021 7:27 PM By: Cameron Thomson 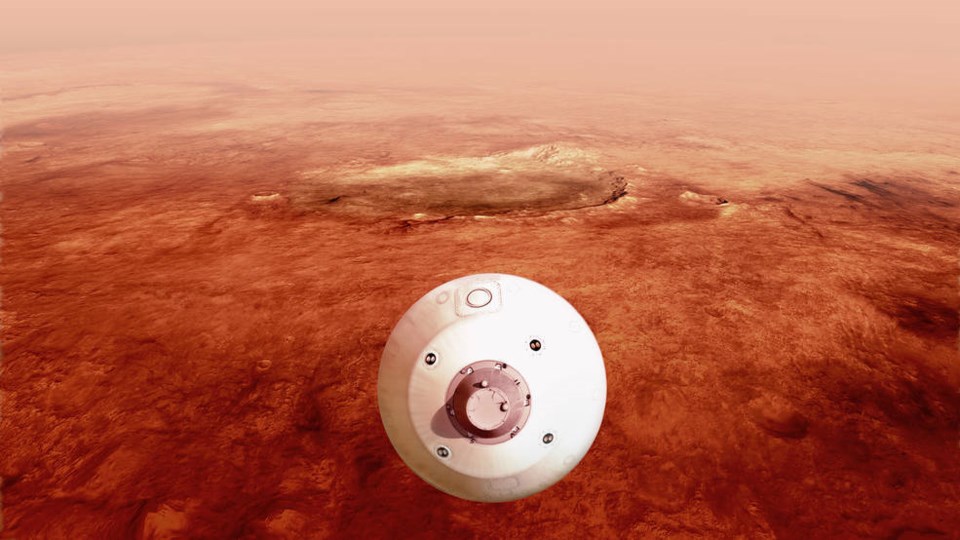 On Thursday afternoon, Vancouverites will be watching live as NASA’s Perseverance rover touches down on Mars.

Well, the landing will be as “live” as can be with over 200 million kilometres of space between Earth and the red planet. The immense distance is hard to put into perspective, most planetary models are wildly disproportionate after all, but consider this: light is the fastest thing in the universe travelling at nearly 300,000 km each second. At the absolute bare minimum, it would take a beam of light just over 3 minutes to reach the surface of Mars. On average though it takes over 12 minutes for light to reach the planet.

It is from that distance and time delay that on Thursday, Feb. 18, millions of people around the world will be watching NASA's first rover landing on Mars since the Curiosity rover completed the trip in 2012.

Roughly the size of a Volkswagen Beetle, the Perseverance rover is jam-packed with the latest and greatest technology scientists the NASA Jet Propulsion Laboratory (JPL) could muster.

In total there are 23 cameras on Perseverance, some of which will be used to take footage of the rover’s landing, otherwise known as the “Seven Minutes of Terror.”

In fact, one of those 27 cameras holds a special place for Canadians. The SuperCam, worked on by Canadian engineer Raymond Francis, can fire a laser to study rock targets smaller than a pencil point. When the laser hits a rock, it vaporizes a tiny amount of it creating a hot plasma. The SuperCam then measures the colours of light in the plasma, which provides clues as to what the target is made out of.

In 2012, footage of Curiosity's descent into Mars went viral online but used computer-generated animations. No one has ever seen genuine footage of a parachute opening in the Martian atmosphere or the rover being lowered down to the surface of the planet, but they will on Thursday.

Not only will us Earthlings be able to see the landing, but we will also be able to hear the landing through Perseverance’s two microphones.

For a full breakdown of Perseverance's bells and whistles visit the rover’s official page on NASA’s website.

Michael Unger, the program coordinator Vancouver’s H.R. MacMillan Space Centre said in a recent interview with Vancouver Is Awesome that projects like these seem to overcome international differences.

“You can imagine all the problems and things that we're facing here on Earth and yet there on another world out in space all these countries are all working together, even if governments aren't even talking to each other," Unger said.

This cooperative mentality stems back to the Cold War, says Unger, when divided nations played a terrifying game of chicken with city-destroying atom bombs.

"When the Russian and American astronauts would go up in space they all kind of had this very startling realization, that we are all living on this one planet together,” Unger said. “That there is nowhere else in the universe that has life and it's so precious."

Unger went on to say that he thinks the act of exploring space helps humanity get the broader perspective that we can all appreciate.

Aside from the seemingly limitless powers of unification space exploration seems to have, sometimes it’s just plain cool.

How can I watch the landing and learn more?

If you can’t get enough of the landing day excitement after watching NASA’s live stream on their official YouTube channel, you might want to check out what is going on at the H.R. MacMillan Space Centre.

While Perseverance will be touching down in Jezero Crater at around 12:55 p.m. Thursday, the space centre will be hosting a virtual celebration of the landing complete with talks, shows, and trivia to enjoy from the comfort of your own home.

You can view the International Space Station from Vancouver tonight
Oct 1, 2020 4:06 PM
Comments