A Vancouver mom is inviting neighbours and fellow Friends fans to stop by her homemade Central Perk display for a chat, a selfie or just to say 'hi'
Apr 17, 2021 7:48 PM By: Megan Lalonde 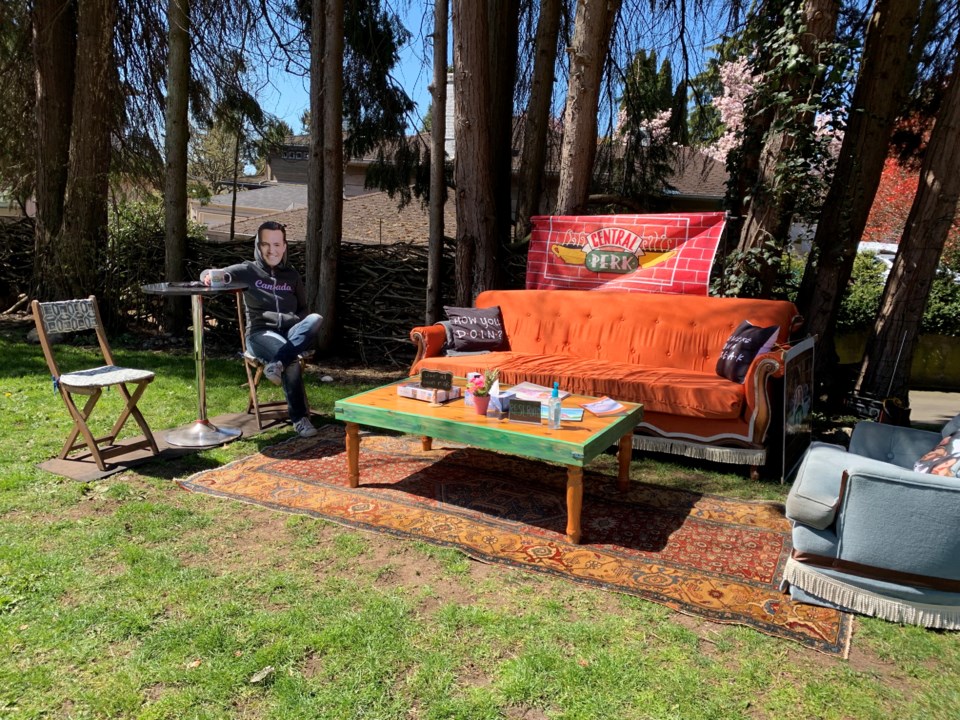 Chandler Bing, a.k.a Vancouver resident Anne Bruinn, has been putting smiles on the faces of neighbours and Friends fans with her homemade "Central Perk" display this spring. Photo courtesy of Anne Bruinn

Have you driven by the corner of Marine Drive and Balaclava Street recently, only to spot a recreation of the Central Perk coffee shop from Friends?

Perhaps you've even seen Monica, Rachel, Phoebe, Ross, Joey or Chandler hanging out on the couch?

If you're wondering how that famous orange couch ended up in a residential Vancouver neighbourhood, no, it's not a clever publicity stunt from Warner Bros. or HBO Max in an attempt to promote the much-hyped Friends reunion special that's supposedly hitting TV screens soon.

Instead, it's the work of an outgoing Vancouver mom who's looking for a way to stay busy, connect with others and bring a smile to her neighbours' faces as the COVID-19 pandemic rages on.

Anne Bruinn said the idea began all the way back in October, when she started dressing up in a different Halloween costume to welcome her daughter home from school each day. But the live-action Halloween displays ended up gaining even more attention from neighbours and passersby than from Bruinn's 10-year-old.

"People loved it," she recalled. "As they drove by, they'd wave and try to figure out if I was real, and so after my daughter got home I would just stay out there because it was so fun."

Bruinn's display took on a Christmas theme once the holidays rolled around— think SCTV's Bob and Doug McKenzie—and even turned into a live recreation of the Bernie Sanders inauguration meme, before her love of Friends inspired her to take the community service to another level. Over the winter, she gradually gathered odds and ends to create her own outdoor Central Perk setup: Friends-themed pillow covers, armchairs, a puzzle, a trivia game, and, of course, a vintage couch.

In her quest for accuracy, Bruinn and her husband stripped the couch back "to its bare bones," even going so far as to make a few structural changes to the furniture and build a new coffee table complete with green edges. "I don't know how to sew, I don't have a sewing machine, but I hand-stitched some covers for the chairs," she added. "I tried to make it as authentic as I could of Central Perk."

She's collected masks of all six Friends and will change up her disguise depending on the day, too. "I've got a guitar, so sometimes I'll put on my Phoebe mask and I'll pretend to play 'Smelly Cat,'" she said with a laugh.

Since the winter rain eased up, Bruinn has been taking 15 minutes out of each sunny afternoon to set up the Friends "coffee shop" on the grass-covered street corner adjacent to her home— "It's cheaper and better than going to the gym," she quipped—where she'll spend a few hours sitting outside, watching the goings-on of her neighbourhood and waving at those who pass by. She's typically armed with a cooler full of sparkling water and is always ready to welcome socially-distanced or masked visitors for a photo, a conversation or a laugh.

"And once we're allowed to gather, then I can break out my brand new Friends trivia set which I haven't opened yet, and we'll have some trivia game nights," she added.

In Bruinn's dream scenario, "people would come by and I would serve them coffee. How fun would that be? So just random people, strangers walking by, stopping to have a coffee," she continued.

"I remember in my 20s I used to be so lonely—like if there had been somebody sitting on the corner that I could just go to and talk to, even if I didn't know them, I would have loved that. So I'm here if somebody wants to come and have a chat, or just connect."

To that end, if other Vancouver-based Friends fans want to drop by and enjoy a coffee at "Central Perk," with their own friends, Bruinn said she's just as happy to head inside for an hour or so and give her visitors some space to enjoy the makeshift sitcom set.

Bruinn said she hopes to keep the gig going through until September, or as long as people continue enjoying it. "I don't want it to get stale," she said, "but it is here for other people."

That said, Bruinn also admits that the project is keeping her sane amidst ongoing COVID-19 restrictions. "I'm super social, so I love connecting with people and I haven't seen friends in over a year," she said. "We haven't been able to get together—like, I used to get together every Friday with some Finnish friends, and we'd share Finnish food and speak Finnish, and you can't do anything like that now.

"So this, just even smiling and waving at people, is such a hoot. I love it."