A RAV4 hybrid will save the average driver $704 a year in gas, compared to regular RAV4. | Submitted High gas prices in Vancouver are driving car owners to switch from regular gas vehicles to hybrids in record numbers, according to Toyota Canada.
0
Jun 19, 2018 8:39 AM By: Nelson Bennett 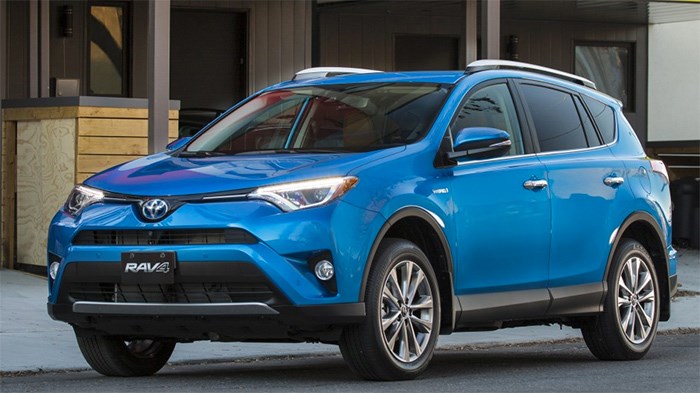 A RAV4 hybrid will save the average driver $704 a year in gas, compared to regular RAV4. | Submitted

High gas prices in Vancouver are driving car owners to switch from regular gas vehicles to hybrids in record numbers, according to Toyota Canada.

Toyota has sold more than 2,200 hybrid vehicles in B.C. since the beginning of the year – a 43.9% increase over last year.

That’s despite the fact that they cost a bit more than conventional gas-powered cars and, unlike battery electric vehicles (BEV), do not qualify for rebates.

As Business in Vancouver recently reported, car dealers have seen an increasing interest in electric vehicle sales, following a spike in gas prices.

But that interest was not expected to necessarily translate immediately into sales. It’s a whole other story with hybrids.

After gas prices hit $1.60 per litre at the end of April, there was an immediate uptick in hybrid sales.

“May was our best month ever for hybrid sales,” Beatty said.

A typical hybrid has both an internal combustion engine and an electric motor and batteries.

They use a combination of the two drives, depending on the car’s power needs. At lower speeds, it can run entirely on electric power, but when acceleration is needed, the internal combustion engine kicks in. The car’s batteries also recharge when the car brakes or goes downhill.

Toyota also makes plug-in hybrids. These car need to be charged, just like a BEV, but also provide a gas-powered engine to provide extra torque and address range anxiety. They still use some gasoline, but much less than a typical hybrid.

Hybrids are more expansive than conventional gas-powered cars. A RAV4 hybrid, for example, adds about $2,400 to the sticker price, compared to a conventional model, Beatty said.

And though they still burn gasoline, they are much more efficient. They consume about 30% less fuel than a comparable car with an internal combustion engine, which means they also generate about 30% fewer emissions.

Replacing a traditional RAV4 with a RAV4 hybrid would save you about $704 annually, based on 20,000 kilometres of mileage, Beatty said.

Despite not qualifying for rebates, Beatty suspects hybrids are selling better than BEVs because they require no real change on the part of the consumer. They don’t have to worry about plugging their vehicle in at night (unless they own a plug-in hybrid), and don’t suffer range anxiety.

“It’s a technology that doesn’t require a lot of behavioural change of the driver,” Beatty said. “That’s one of the reasons that it’s been adopted to the extent that it has by Canadian drivers.”