Not only was the Vancouver driver unlicensed and impaired three times the legal limit – she had recently re-entered the country
Oct 8, 2020 10:32 AM By: Sarah Grochowski 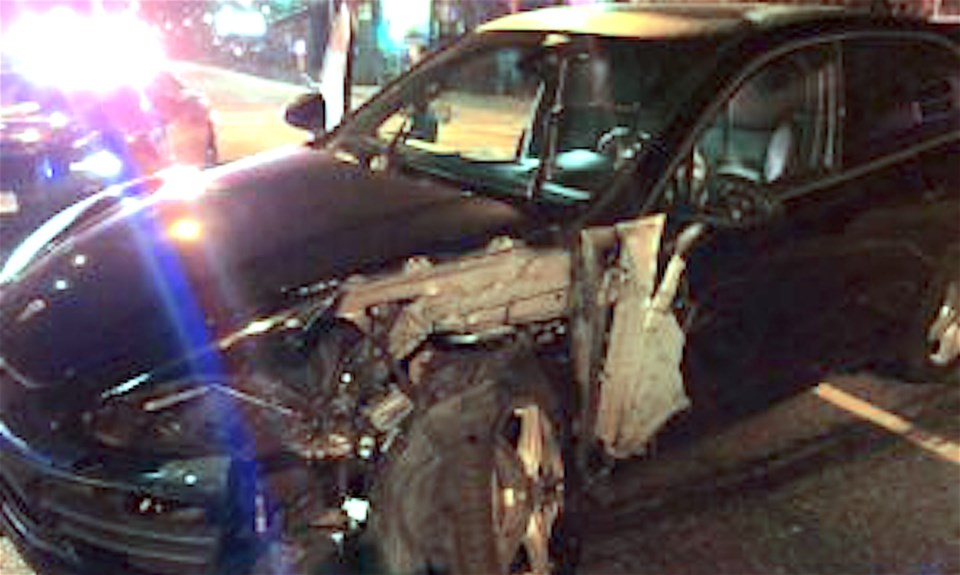 Porsche after it was driven into a metal lamp post by an allegedly impaired driver Oct. 6. Photo: Vancouver Police Department

Canadian public health authorities and border agents are investigating a driver who allegedly tested as having three times the legal limit of alcohol before committing a hit-and-run Tuesday evening.

The 30-year-old sideswiped another car while heading north on Clark Drive in the Downtown Eastside at around midnight. She proceeded to drive her Porsche into a metal lamp post.

A witness told police when she was able to stand, she fled the scene.

After being hauled in by police in the early hours of Wednesday morning, the woman admitted to having been recently out of the country.

“She believed she was exempt from the Quarantine Act due to the nature of her work,” a statement from police detailed. Authorities also discovered the woman was without a valid license.

Initially, the impaired driver was helped out of her Porsche by the very person she crashed the vehicle into after running a red light on East Hastings Street at high speeds.

The driver “appeared to be intoxicated and there were numerous bottles of alcohol in the car," said a witness.

Vancouver Police Department officers were able to track down the Porsche owner at a home in North Vancouver.

After bringing her into the local detachment, a breath sampling revealed alcohol in her system was three times the legal limit than what is permitted to drive.

The driver is now facing charges of impaired driving and failing to remain at the scene of an accident.

She's also been ticketed for not having a valid driver’s license, been given an unlicensed driver prohibition, and a seven-day vehicle impoundment.

Her possible breach of Canada's Quarantine Act is under investigation by Public Health Canada and Canada Border Services Agency.