Memorial held for members of Surrey's homeless community who have died

Former residents of a tent encampment in Surrey, B.C., gathered Sunday to remember community members who have died.
0
Jul 8, 2019 7:23 AM By: The Canadian Press

SURREY, B.C. — Former residents of a tent encampment in Surrey, B.C., gathered Sunday to remember community members who have died and to send a message that even though the so-called "Surrey Strip" has been dismantled, homelessness has not been solved. 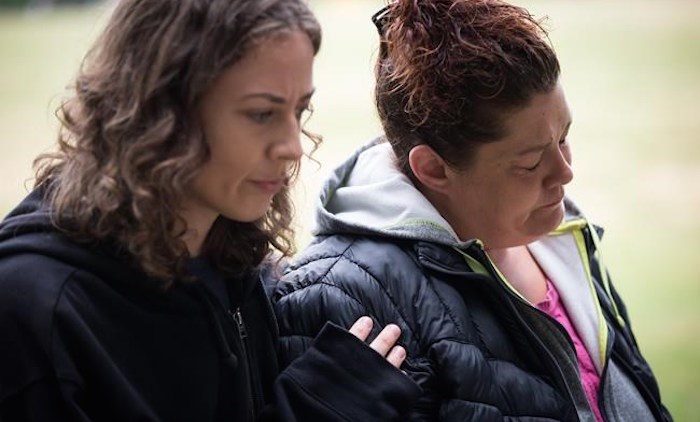 Wanda Stopa, right, who is currently living in a tent in a homeless camp, is comforted by Isabel Krupp, an activist with Alliance Against Displacement, during a gathering to remember friends, family and former residents who died in an area known as the “Whalley Strip”, in Surrey, B.C., on Sunday July 7, 2019. Nearly 200 people had been camping on the stretch of 135A Street in Surrey when it was cleared by bylaw officers and RCMP last summer. THE CANADIAN PRESS/Darryl Dyck

At least 80 tents that made up the encampment along 135 A Street in Surrey's Whalley neighbourhood were dismantled more than a year ago, and around 170 people who called the strip home were given access to shelter beds or 160 units of new modular housing in the area.

But many former residents of the strip are still sleeping outside or being bounced from shelter to shelter, according to Wanda Stopa, who was among the first to set up her tent along the strip.

"The modules didn't solve the problem. There's more than 160 people that needed help," said Stopa, adding she didn't have a shelter for around a month after the encampment was dismantled.

"There's still a lot of us outside," she said.

Stopa helped organize Sunday's gathering, where one-time occupants of the strip and their allies came together to mourn and remember friends and loved ones who have died while homeless in Surrey and the surrounding region.

They wrote at least 60 names on a banner, a list that Stopa said keeps growing every day.

A report from the BC Coroners Service in March found 175 homeless individuals died in the province in 2016, up from 73 the year before, and the majority of them died of drug overdoses or alcohol poisoning.

Isabel Krupp is an organizer with the Alliance Against Displacement, a group that works with members of Surrey's homeless community near the former 135 A Street strip.

"We need to create space to mourn these lives," Krupp said. "We have to create that space ourselves to hold them in our hearts and to remember them."

As for Stopa, she said she could only be shuffled from shelter to shelter for so long. She decided to set up camp outdoors on a property not too far from the strip, where she has lived for the last four months.

The new encampment has grown to a community of around 60 people, and Stopa said people stick together and make life easier for each other.

Surrey bylaw enforcement officers notified residents last week of their intention to disperse the camp, according to Stopa, who said she plans to stand her ground.

"We're not going away," she vowed.