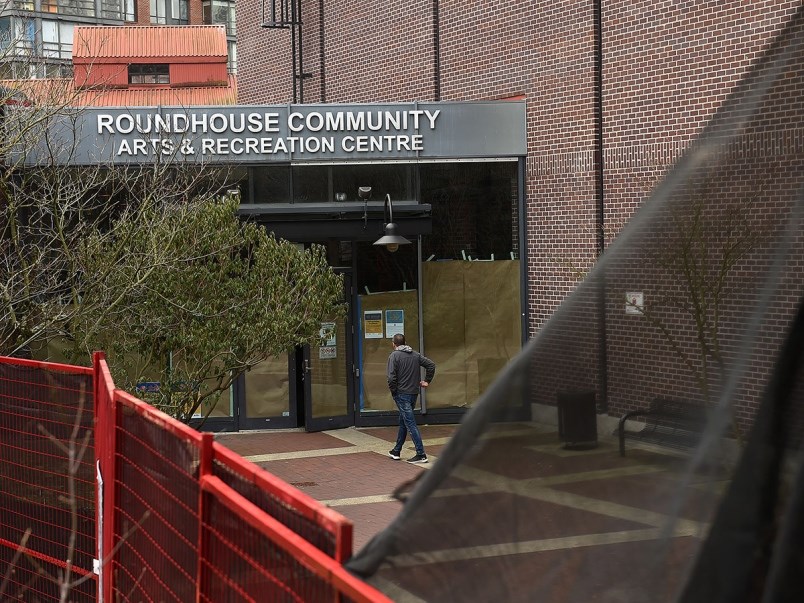 The Roundhouse Community Centre shuts its doors July 3 to homeless people after they were moved into temporary accommodation elsewhere in the city. File photo Dan Toulgoet
About 200 homeless people who resided in two Vancouver community centres have been provided temporary accommodation elsewhere in the city and park board staff is now preparing the Coal Harbour and Roundhouse facilities to partially re-open to the public in September.

Both centres became places of refuge for homeless people during the early days of the pandemic in an effort to prevent transmission of the coronavirus among people living on the street and in shelters.

Roundhouse in Yaletown closed June 19 to its guests and Coal Harbour, located on the waterfront near Stanley Park, shut its doors July 3. Over the period the centres were open, approximately 125 people stayed at Roundhouse and 75 at Coal Harbour.

In an emailed statement to Glacier Media, B.C. Housing said it worked with non-profit housing providers to ensure each person got housed temporarily in a hotel or other form of housing before the centres closed.

“Outreach staff connected with each person to assess their social and health needs, and each person was provided with temporary accommodation depending on their needs,” the statement said.

The centres were identified by the city and park board in response to B.C. Housing’s request for potential locations in downtown to house homeless people. Their proximity to St. Paul’s Hospital on Burrard Street was a factor in settling on the locations.

All community centres in Vancouver were closed in mid-March to help prevent the spread of the coronavirus. At the time, city officials said the centres could be used for homeless people and others who can’t self-isolate such as tenants in hotels, where sharing a washroom and other facilities is common.

Some people complained to B.C Housing and Glacier Media about Coal Harbour and Roundhouse being used to house people, including concerns about loitering and an increased presence of emergency response vehicles in the neighbourhoods.

Others, as evidenced in emails to Glacier Media, welcomed their new neighbours, including a mom who planned to bake bread with her young daughter and provide it to people residing at Roundhouse.

The park board announced July 30 that it will re-open Sept. 8 the city’s 24 community centres, although each facility will be limited in what it offers and how it offers programs and services.

Staggered start and end times will be implemented.

There is no timeline yet for the reopening of gyms and fitness centres, racquet courts, ice rinks, indoor pools and pottery and woodworking studios at the centres.

“Staff wants to be really careful, and I support that,” said park board Comm. John Coupar.

“I’ve been by Roundhouse and it’s been cleaned up, and all the fencing [that blocked the entrance] is down. I know they’ve been doing a lot of work around safety protocols to make sure it is clean and safe, so I have a lot of confidence in that.”

A report released Aug. 5 by the B.C. Non-Profit Housing Association showed that 1,548 people were living in some form of shelter in Vancouver and 547 on the street during a 24-hour homeless count in March.

The 2,095 people counted was 128 fewer than last year’s count, although Mayor Kennedy Stewart and Coun. Jean Swanson have both said a count today would likely register a higher number of homeless in Vancouver.

They both pointed to the effect the pandemic has had on the city’s most vulnerable and those living paycheque to paycheque who lost their jobs. The pandemic was declared the week after the Metro Vancouver homeless count.