No evidence of homeless being relocated to hotels as COVID-19 hits: DTES advocate 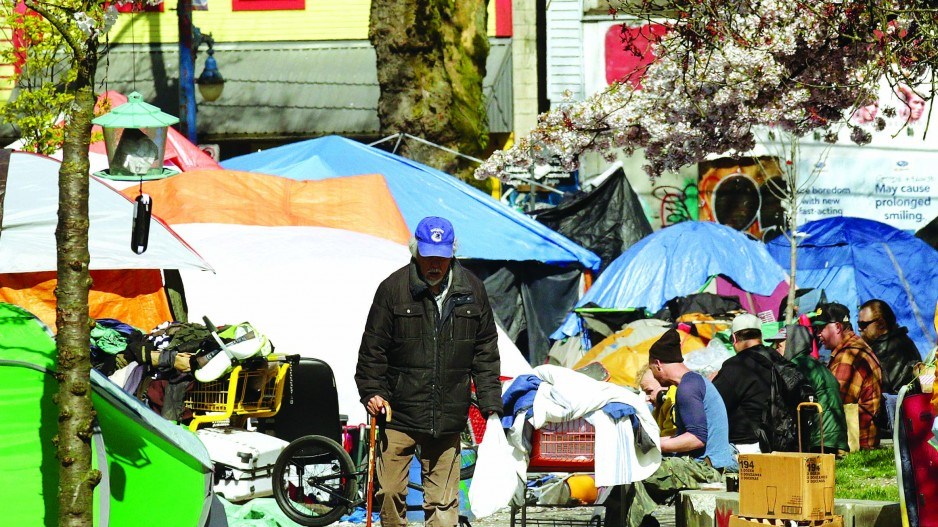 The City of Victoria has moved at least 27 homeless people from city parks to hotel rooms since March 23, according to Victoria Mayor Lisa Helps, as part of the city’s response to COVID-19.

The city secured 35 rooms through Emergency Management BC, Helps told a March 30 press conference, and expects to have 75 rooms secured shortly.

She added that B.C. health authorities have told the city that COVID-19 will hit the unsheltered population hard at some point.

In Vancouver, time is running out, according to advocates for the homeless on the city’s Downtown Eastside (DTES), despite assurances from city hall.

“We are securing hotel rooms, so if there is someone that’s homeless, or living in a shelter, that’s needing to be in isolation, they are being placed in hotel rooms,” Sadhu Johnston, City of Vancouver manager, said on March 24.

The city’s task force is collaborating with Vancouver Coastal Health and BC Housing to support those experiencing homelessness during the outbreak, according to Johnston.

In an April 3 televised address, Vancouver Mayor Kennedy Stewart said BC Housing had secured hundreds of hotel rooms. But there is no indication the local homeless are being escorted to hotels, said Constance Barnes, executive director of the Four Directions Trading Post, a DTES street-vendor market that the city recently shut down.

“There is no plan. There is nothing. No hotels are OK’d at this point,” Barnes said. “There are still a lot of people sleeping on the street and in Oppenheimer [Park].”

“There may be a plan, but it’s not evident if you’re on the ground. My fear is that it’s based on letting people get sick first. We need hotel rooms ASAP,” Swanson said.

The DTES and its Oppenheimer Park has the highest number of Vancouver’s estimated 2,200 homeless people, including approximately 640 who are sleeping on the street, based on a 2019 survey. (The 2020 homeless count, which was conducted March 3 and 4, is scheduled to  be released in June.)

Barnes said many DTES residents have little information about social distancing or the spread of the coronavirus. If anything, she said, they have even less contact with authority since the COVID-19 crisis began.

“City garbage collectors will not work in the 100-block of East Hastings,” Barnes said, “and police are too afraid to get out of the cars; they just yell out the window.”

B.C. firefighters have also been ordered to stop responding to all drug overdose calls, except those that are code purple, which indicates an immediate threat to life. Most overdose calls are code red, which are less urgent.

From March 23 to 29, there were eight overdose deaths in Vancouver, according to the Vancouver Police Department, the highest number in a single week since August 2019.

BC Housing and the city have opened 143 beds at the Coal Harbour and Roundhouse community centre. Each centre has separate rooms with private bathrooms available for people that need to self-isolate.

“These two sites were available immediately and have a size, indoor layout and proximity to St. Paul’s Hospital that make them well-suited as emergency response centres for people experiencing homelessness,” said a BC Housing statement.

As for hotels, BC Housing said it is conducting “a provincewide inventory of additional locationsfor accommodating vulnerable populations and is in the process of finalizing agreements with facility providers. We are working with our partners to ensure these additional spaces are secured at below market rental rates.”

“As far as I know, no homeless people have been moved to hotels,” Swanson said.

When asked April 4 how many hotels have thus far been secured for Vancouver’s homeless, Matthew Borghese, BC Housing’s senior communications adviser, said, “We are still finalizing details.”

The BC Hotel Association (BCHA) estimates that 60% of the province’s hotels have closed since the pandemic began, including more than 20 in Metro Vancouver.

The association expects more will close in the coming weeks.

“While BC Housing is the lead agency on this file, many hotels across British Columbia are enthusiastically raising their hands to assist with the ever-changing impact of COVID-19, and the most vulnerable are included in that important work,” said BCHA President and CEO Ingrid Jarrett. “Hotels have, for many years, stepped up when needed to assist in times of need, and this crisis is no different.”

Neither BC Housing nor BCHA could name any Metro Vancouver hotels preparing to open their doors to the homeless.•

Suspect pleads guilty to attempted murder in Downtown Eastside shooting
Oct 25, 2020 6:46 AM
Comments
We welcome your feedback and encourage you to share your thoughts. We ask that you be respectful of others and their points of view, refrain from personal attacks and stay on topic. To learn about our commenting policies and how we moderate, please read our Community Guidelines.