For the second time in less than a week, pro-Hong Kong and pro-China supporters clashed at the Lennon Wall at Aberdeen Canada Line station in Richmond.
Richmond News Oct 7, 2019 7:17 AM 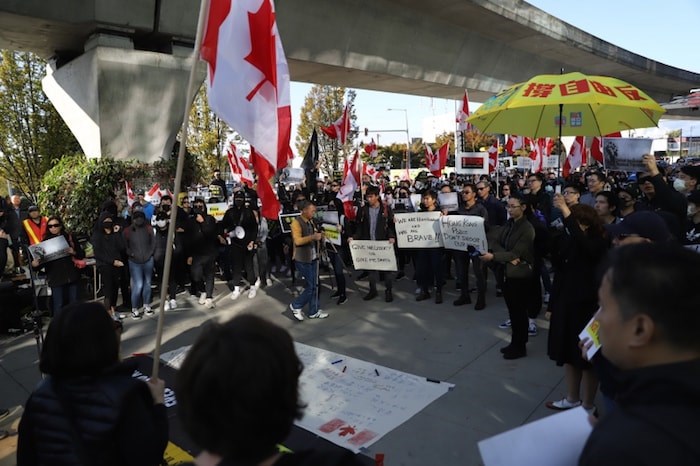 For the second time in less than a week, pro-Hong Kong and pro-China supporters clashed at the Lennon Wall at Aberdeen Canada Line station in Richmond.

Saturday’s protest came on the heels of Tuesday’s altercation at Aberdeen station, when a group of Mandarin-speaking people – apparently pro-China – were caught on video tearing down a Lennon Wall put up by high school students in support of the Hong Kong protests. 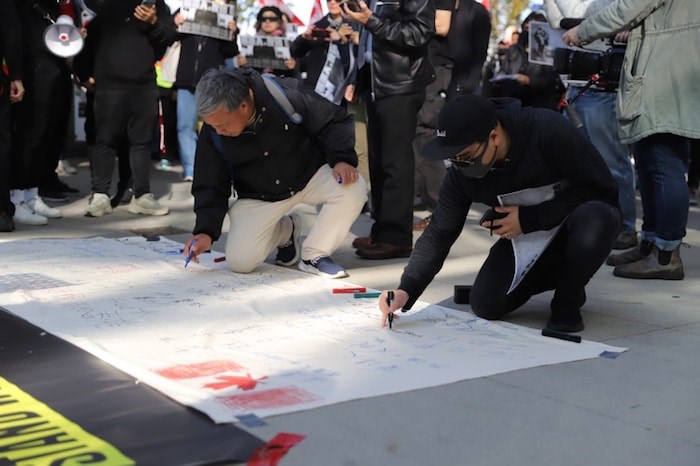 Supporters also wrote messages of support for Hong Kong protesters on a large white banner which will be taken back to Hong Kong. Photo by Herb Chao

Determined to rebuild the display, pro-Hong Kong demonstrators were back on Saturday pasting sticky notes to the wall with messages of support for Hong Kong. They also set up an information booth to encourage Richmondites to vote in the Oct. 21 federal election.

Mabel Tung, the chair of Vancouver Society in Support of Democratic Movement (VSSDM) and the event’s organizer, said she felt angry and sad after watching the video of the individuals tearing down the makeshift wall on Tuesday, so she decided to come out Saturday to build the biggest Lennon Wall in Richmond. 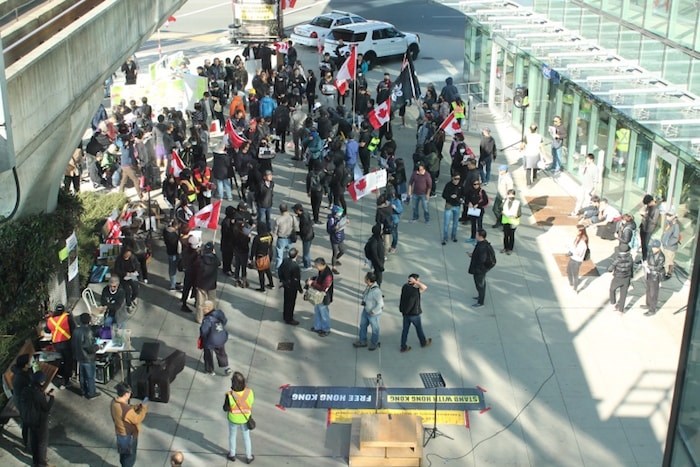 “As Canadians, we are exercising our freedom of speech. These rights are enshrined in the Canadian constitution,” said Tung.

The rally began with the singing of "O Canada."

However, the situation turned chaotic when pro-China supporters showed up and staged a counter-protest, according to Kevin Huang, who live-tweeted from the event.

The #LennonWall being taken apart so it can be taken away (by design).

The counter protest is gathering and someone handed out small Chinese flags. pic.twitter.com/48eLjCX2MF

A pro-China student, who didn’t want to give their name for safety reasons, said they also felt upset that they have been told to “go back to China.”

A male was escorted away by Richmond RCMP. The Richmond News has reached out for more information.

Even before the conflict, Tung had issued a warning to those threatening to tear down the wall.

“Let those be warned, whoever attempts to violate these rights with the use of violence and intimidation will have to face the Canadian court of law. He/she will be brought to justice swiftly and decidedly.” 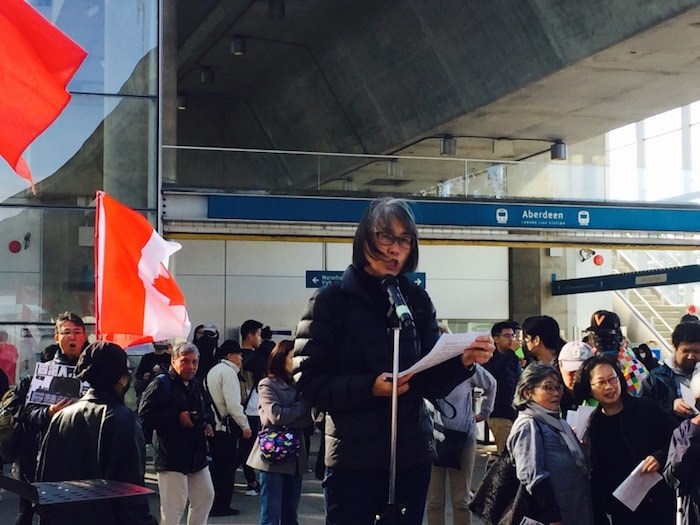 Mabel Tung said she felt angry after watching a video showing a group of pro-China supporters tearing down the Lennon wall on Tuesday. Photo by Nono Shen

After Tung’s speech, pro-Hong Kong supporters waved Canadian flags and sang Glory to Hong Kong, a four-verse song with lyrics that reference “democracy and liberty.” The song has become an anthem for the Hong Kong protest movement.

Supporters also wrote messages of support for Hong Kong protesters on a large white banner, which will be taken back to Hong Kong.

Green candidate for Richmond Centre, Francoise Raunet, attended the event and said she talked with a woman apparently involved in Tuesday’s altercation at Aberdeen station.

“I said to her, in Canada freedom of expression is really important. We can’t accept people trying to tell other people not to express their opinions. If you have different ideas, then (put) your own poster on the wall instead of taking others’ posters down.”

“We’re in the 21st century; human democracy and freedom are things people should be fighting for,” she added. 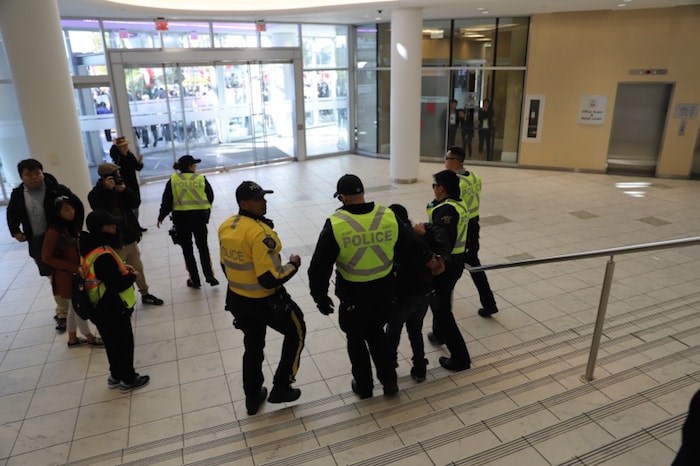 A man escorted away by Richmond RCMP and asked to leave the scene. Photo by Valerie Leung 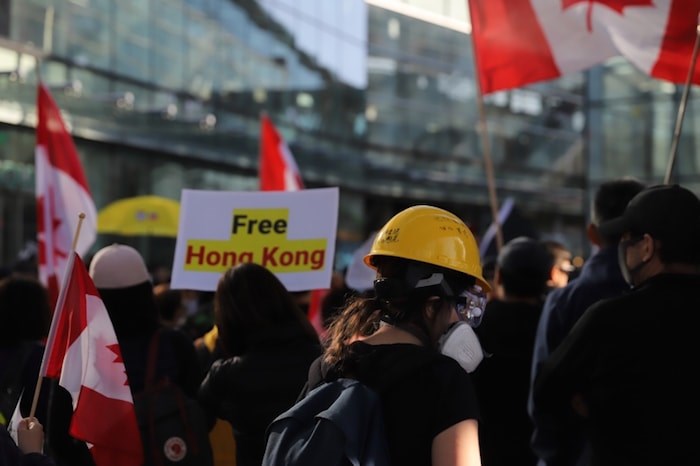 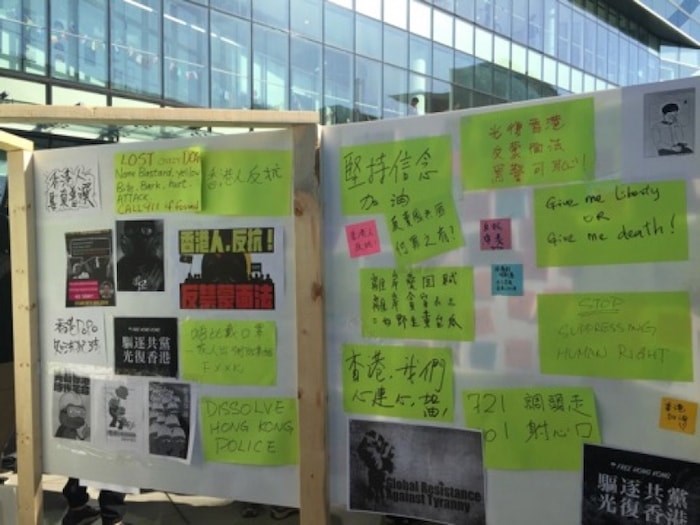