Premier John Horgan’s office was warned of possible ride hailing political problems seven months before conflict of interest allegations were were directed at the committee examining the issue, documents released under access to information laws show.
0
Apr 30, 2019 6:56 AM By: Jeremy Hainsworth

Premier John Horgan’s office was warned of possible ride hailing political problems seven months before conflict of interest allegations were were directed at the committee examining the issue, documents released under access to information laws show. 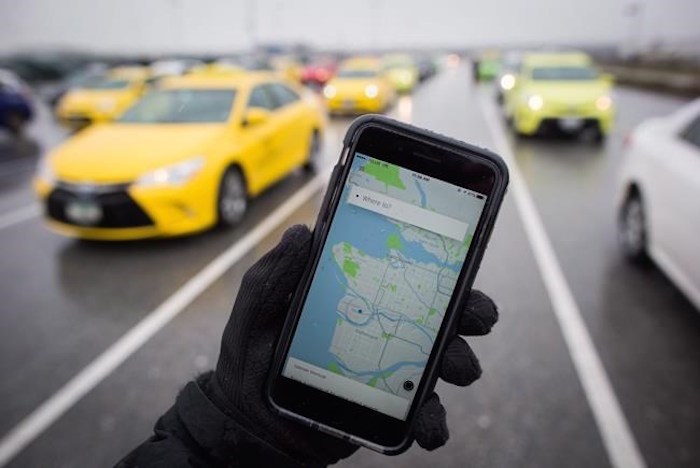 The Uber app is displayed on an iPhone as taxi drivers wait for passengers at Vancouver International Airport, in Richmond, B.C., on Tuesday March 7, 2017. The federal Competition Bureau wants British Columbia to re-examine its taxi regulations to permit more competition in the industry and improve services for riders and businesses. THE CANADIAN PRESS/Darryl Dyck

And, July 19 documents show Horgan’s then-media relations director Stephanie Sherlock, stakeholder relations director Mira Oreck and director of communications Sage Aaron were aware Yellow Cab president Kulwant Sahota was asking if Sihota was a Kater partner and if any ministers were involved in the company.

Then, in February 2019, tempers flared when it was revealed that the father of Delta North MLA Ravi Kahlon, a Legislature ride sharing committee member, held a taxi licence. B.C.’s conflict commissioner was asked to rule on a perceived conflict of interest involving Kahlon.

But Horgan’s staffers had already been warned.

A Facebook post from the Wake Up Surrey group was flagged by email to Aaron and Oreck July 20, 2018. Aaron forwarded the message to Horgan’s chief of staff, Geoff Meggs.

“Please see attached screenshot of the Facebook post of Sukhi Sandhu, Surrey Wakeup group cautioning the NDP government,” Shruti Joshi wrote in the email. “Not sure what he’s talking about but could be rumours circulating of some MLAs/ministers being involved in Kater.”

Sukhi Sandhu FB by on Scribd

Aaron told Glacier April 29 that to the government’s knowledge, “based on what was reported in the media, Mr. Sihota was involved in introducing the Vancouver Taxi Association to Kater investor Monty Sikka, but Mr. Sihota has said he is not involved in the company. That remains our understanding.”

But, said Liberal MLA Jas Johal, he went to Kater founder Monty Sikka’s Monark Group headquarters to learn more about the ride hailing service where he was given a presentation.

“The person walking me through that power point presentation was Moe Sihota,” Johal said.

Kater is one of three smartphone app-based companies vying for a foothold in the Lower Mainland market, one of the few large cities in North American without such a service.

The other two firms, Uber and Lyft, can’t operate under current rules due to insurance issues, which could prevent the Passenger Transportation Board from approving services.

Two more services, Saskatchewan-based Oye.One and RypeRides have also been involved in direct discussions with the minister one at least occasion in September, documents show.

The B.C. government tabled legislation in Nov. 19, 2018, to introduce insurance products for ride-hailing companies by fall 2019.

If passed, the legislation would require ride-hailing drivers to have a commercial or Class 4 driver’s licence, requiring criminal record, medical, security and safety checks. Uber and Lyft had pushed for use of ordinary Class 5 licences.

The government was aware it needed to be on the defensive about Kater, Nov. 15 speaking notes for Minister of Transportation and Infrastructure Clare Trevena show. “Our government is not associated or affiliated with Kater or the developer in anyway,” the notes said.

Kater, however, struck a deal with the Vancouver Taxi Association, long a supporter of former Vancouver city councillor Meggs, to secure 140 taxi licences for the tech company’s own fleet of vehicles.

And, it was former NDP cabinet minister and party president Sihota, no stranger to controversy, who introduced Kater to the taxi association.

Kater has purchased its own fleet of cars and is employing its own drivers, who must possess the more advanced Class 4 drivers licence.

Passengers will in turn hail those vehicles using a mobile app similar to Uber’s or Lyft’s.

Beyond the introduction of insurance products, Transportation Minister Claire Trevena hasn’t committed to a specific date for launching services. Horgan, though, has said it will happen later this year.

In July 2018 the government committed to introducing changes proposed by consultant Dan Hara, hired by the government to consult with industry stakeholders.

Hara had been hired by the City of Vancouver to do a taxi and ride-hailing review when Meggs was a Vancouver city councillor.

People close to Meggs have told Glacier Media that the chief of staff will help set the government’s agenda on issues such as ride-sharing laws around Uber and Lyft stemming from his taxi industry support.

Meggs apparently also received the press release to be sent out by Trevena’s office.

“I think the lede is a bit aggressive – won’t Hara recommend steps to prepare the taxi industry for the introduction of a made-in-BC solution?” Meggs wrote.

The words “made-in-BC solution” appeared in the subsequent news release.