A Richmond Hospital patient, alleged to have stolen a Richmond police cruiser before going on a rampage down Gilbert Road on Monday, has been charged.
0
Oct 11, 2019 7:24 AM By: Alan Campbell 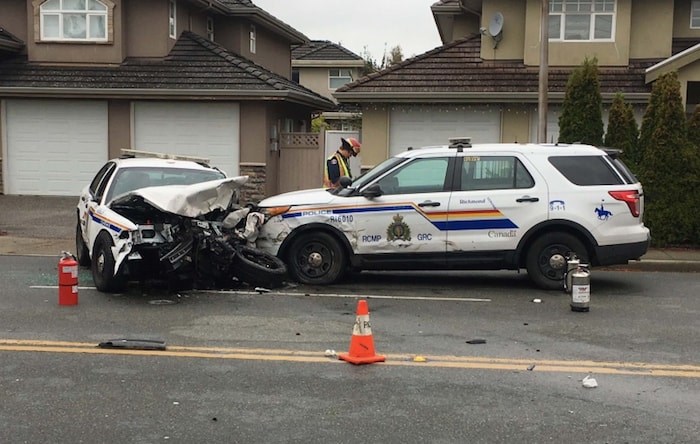 This photo shows how one police cruiser appears to have rammed head-on into another. Bob Williamson photo

A Richmond Hospital patient, alleged to have stolen a Richmond police cruiser before going on a rampage down Gilbert Road on Monday, has been charged.

Muhammad Farid, 40, of Abbotsford, appeared in a Richmond Provincial court Wednesday morning to answer to a charge of dangerous operation of a motor vehicle causing bodily harm and flight from a peace officer.

Just after noon on Monday, Richmond RCMP were called to Richmond Hospital after a report that a patient, who was not permitted to leave the premises, had fled on foot.

A Mountie found the man in question, but was unable to take him into custody before the suspect allegedly got into the police cruiser and drove off.

The man driving the stolen police car is then alleged to have collided with a civilian vehicle and an unmarked police car near Gilbert and Donald roads, just north of Blundell Road.

He then collided with a second civilian vehicle on Gilbert, just south of Blundell, where he was arrested.

A woman who was injured in the collision remains in hospital, said police on Thursday, and is expected to recover from her serious, but non-life threatening injuries.

BC RCMP, which took over the case from Richmond RCMP, said it can’t comment any further, “given that this matter remains the subject of independent investigation by the (Independent Investigations Office of British Columbia) IIO BC.”

Health authority bosses said on Wednesday that they will be reviewing security at the hospital.

A spokesperson for Vancouver Coastal Health (VCH) said Wednesday that there will be a meeting "with hospital leadership and hospital security to review the incident, to see if any improvements need to be made to protocols."

The News asked VCH, which operates Richmond Hospital, what level of security the patient was subject to at the time he left the hospital.

The spokesperson declined to comment, citing privacy concerns, but added that, “Patient safety is our highest priority and we regret any anxiety this incident may have caused anyone.

“We commend our staff, security officers, and Richmond RCMP for working quickly to protect patients.”

“Security officers are stationed in the emergency department in Richmond Hospital. Each patient is looked at individually to determine possible safety and security risks.

“There are certain security protocols that can be used, such as using restraints if a patient is considered an elopement risk or a threat to their own or someone’s safety.”

Neither the BCRCMP, nor the IIO BC, would comment on a photo sent to the Richmond News by local resident Bob Williamson, which appears to show a marked police cruiser had ultimately halted the progress of the stolen cruiser.

One RCMP officer was injured and is being treated for what are understood to be minor injuries.

Because police vehicles were involved in the incident, the RCMP has called in the IIO BC to determine whether police actions or inactions are linked to the woman’s injuries.