Ever wondered how much has changed at the intersection of Cambie and Cordova since the turn of the 20th century?

Or what an old neighbourhood looked like before it was old?

Vancouver Now and Then is a new website/pandemic project from John Bentley a semi-retired real estate and architecture photographer and long-time resident of the city. He's patiently gone out to dozens of historic sites across the city, matched up archival photos with the current scene and snapped a 2020 (or 2021) version of the same spot from the same angle.

He then uses a slider tool so people can compare the two images.

"I’ve been taking these pics for over a year and putting them on my blog," he tells Vancouver is Awesome.

The inspiration came when he came across an archival photo of a house he'd shot around 12 years ago.

"The picture was 100 years old and (the house) looked exactly the same," Bentley says.

He made a gif of the two photos to share the historic comparison and put it on his blog. As the pandemic took hold he decided to pursue the idea further, researched some locations and jumped on his bike.

"I’m not doing anything that hasn’t been done before, but with the sliders, I’m presenting them a little differently," Bentley says.

Recently he decided they needed a better home and contacted a friend to help create the website, which hosts an interactive map so people can see where exactly the shots are.

Lining up the shots can be difficult, for a variety of reasons. First off, he's eyeballing it, using his phone as a reference tool. 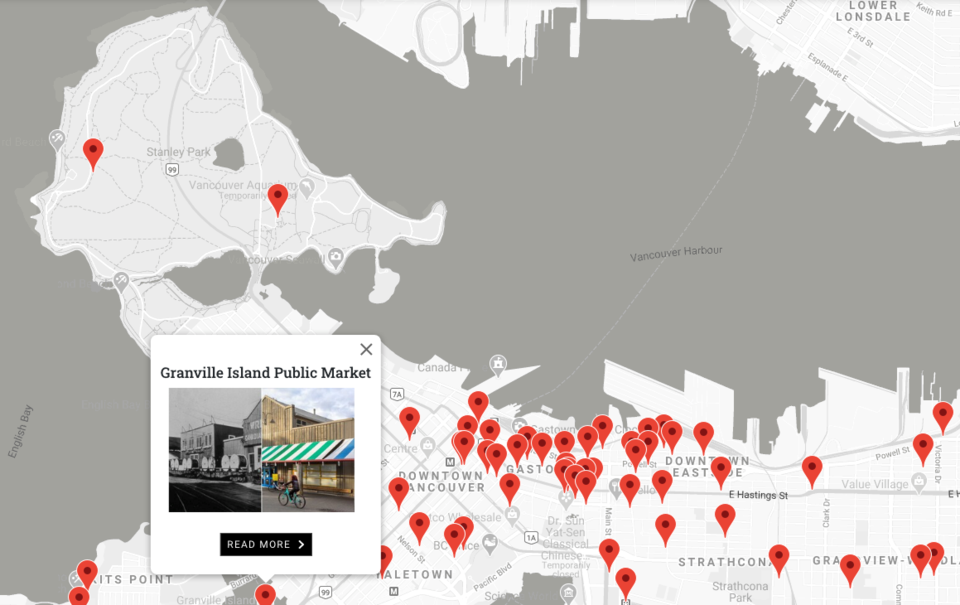 "Some are really hard because they don’t line up exactly because I used a different lens or in a different spot than the original photographer," he says. "I’ve noticed a lot of the old pics were taken from an elevation."

He suspects the original photographers may have used trucks or ladders when shooting some street scenes.

Some intersections are also too busy for him to venture a shot the way it looked in the original photo.

Another issue is trees.

Nowadays a tree-lined street is not uncommon, but when those neighbourhoods were built most trees were cut down. That means some angles are impossible due to an oak or something having grown up right in the way.

One thing he always tries to capture now is someone interacting with the scene, like a cyclist or pedestrian, to give a more fulsome idea of how things have changed.

The project has also allowed Bentley to discover more of Vancouver; even though he's lived here for decades there are still new spots to explore.

"I like the Stanley Park Pavillion because I’d actually never been to that pavilion," he says. "I’ve lived here for 40 years and didn’t realize it existed."

They also illuminate stories he'd never heard before sometimes. In Chinatown he learned about an opium importer that had worked at the building back when it was new. And on Granville Island the Kid's Market used to make 'white lead' a material used to keep barnacles off of old ships. The market building used to house a factory which built wire cables.

While some photos are over 100 years old, others are more recent. He also cites the work of Greg Girard and Fred Herzog, who captured city street scenes 50 years ago.

"It’s fun to line those up and take pics with people wearing masks or riding a unicycle," he says of the historic street scenes.

While the project is something that started out of personal interest, he also sees it as an archival project in its own right.

"I’m not doing it for a living, I’m trying to capture places that might not be here in 10 or 15 years," he says. "I’m just doing it for posterity."