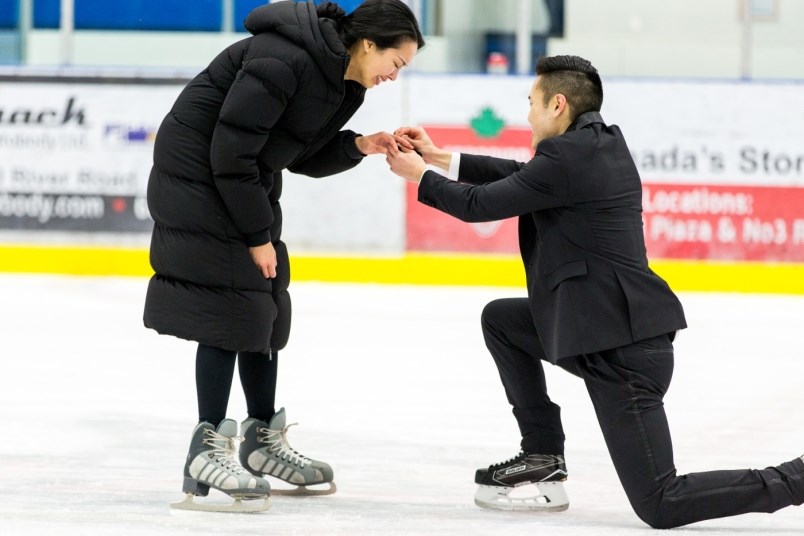 It was a proposal six months in the making.

When Daniel John sat down with his colleagues to plan their realty firm’s annual free Family Day skate at Minoru Arenas, he decided he would pop the surprise question at the event.

For the last three years, Sutton Group Seafair Realty has rented out the rink for the Family Day event.

“I wanted to do something original for her…So about six months ago, I brought up the idea. And (the Sutton team) all said it was a great idea and I was kind of on the fence,” said Richmondite John, about proposing to his partner of three-and-a-half years, Megan Cheng, 30, whom he met through an online dating app.

“But that’s what got it going. And then a really good reason (for it) was that all of our family and friends usually come out (to the skate)...which I know is important to her.”

Another good reason to propose at the skate, he added, was because the team could hide photographers and videographers in plain sight, as they are typically at the event and wouldn’t arouse any suspicion.

You'll find the proposal at the 2:08 mark in the video.

The whole team pitched in, said John’s colleague Ray Estrella, whose job was to find a way to get the music on the rink.

Meanwhile, another workmate, Dan Fontaine, had to make sure the Zamboni didn’t go on the ice, and the rest of the team had to find a good reason to bring Cheng to the players’ bench during intermission.

“This is the dumbest thing I’ve ever done in my life,” says John in the video, before hitting the ice.

“No warm-up, nothing. Just on it, just winning it.”

John, who was wearing a tux, performed a solo ice-dance routine during the intermission, before skating over to the players’ bench and bringing his girlfriend, Cheng, onto the ice to propose to her.

He told the Richmond News it’s the most nervous he’s ever been in his life, adding he had originally prepared a speech but forgot what to say when he saw how surprised Cheng was.

“But it turned out alright. She said yes,” he said.

“She was very surprised…She was like, ‘Oh, you never lie to me, I can’t believe you pulled this off,’” John added, and said it was quite stressful to hold the secret in for six months — and make sure his co-workers did as well — without telling friends or family.

There’s no date for the wedding yet, said John, but the two will likely marry sometime next year.