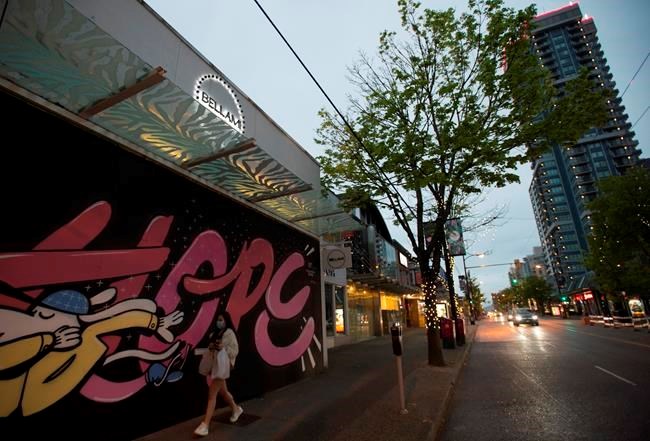 A woman wearing a protective face mask walks past the boarded up shops along Robson Street in downtown Vancouver, Monday, May 4, 2020. Reported "hate incidents" have more than doubled this year in Vancouver and police say offenders are targeting the city's Asian community as the COVID-19 pandemic continues. THE CANADIAN PRESS/Jonathan Hayward

VANCOUVER — Reported "hate incidents" have more than doubled this year in Vancouver and police say offenders are targeting the city's Asian community as the COVID-19 pandemic continues.

Insp. Dale Weidman, incident commander for the Vancouver Police Department's new hate crime project team, said the department has identified 155 hate-associated reports this year, up from 69 over the same time in 2019.

The city's Asian community is seeing more than nine times the number of incidents at 66 compared with seven last year, he said.

"It's an alarming increase and I want to assure you that the department takes these things very seriously," Weidman said.

Holding offenders accountable can be more difficult in cases of non-violent incidents because of the nature of many of the offences. There is often no witness to graffiti and in other cases, victims may hesitate to come forward, he said.

However, some of the cases also involved violence. A suspect has yet to be identified in the attack of a young Asian girl who was punched in the face. A charge of assault has been recommended in the case of a senior who was knocked to the ground at a convenience store, Weidman said.

Among the reports, 35 have been classified as potential hate crimes. Charges have been recommended in 16 cases, ranging from uttering threats to assault and mischief, while 19 are still being actively investigated, Weidman said.

Just over 100 files have been closed because there is either no suspect or no evidence that would lead to the identification of a suspect, however they could be reopened if more evidence is received. In the remainder of cases, Weidman said a motive has not been determined.

He encouraged anyone who witnesses or experiences a form of hate, whether it is based on race, gender or sexual orientation, to report it.

Although the majority of cases involve things like graffiti and racist remarks, he said their seriousness should not be minimized.

A similar report was put out in May with the hope of bringing more awareness to the public, while encouraging victims to come forward to police.

Since then, the six-member hate-crime team has formed under Weidman's oversight.

Police are also using data and analytics to increase their presence in harder hit areas and new reporting forms are available in Chinese languages, to remove language as a barrier to reporting.

Const. Tania Visintin said in a statement the cases are a top priority for the department, which has implemented new measures, including the formation of the project team.

"Crimes against race, gender and sexual orientation are serious and intolerable," she says.

"We recognize this continues to be a problem in our city. We are making it our goal to combat it as quickly as possible."

Anyone who is a victim of a hate crime is asked to call 911, the police non-emergency line or Crime Stoppers.

This report by The Canadian Press was first published July 17, 2020.