B.C.’s Independent Investigations Office has been called in to investigate after an armed intruder who reportedly burst into a Lynn Valley condo building Thursday night jumped or fell from a third-floor balcony.
0
Jun 21, 2019 3:46 PM By: Jane Seyd

B.C.’s Independent Investigations Office has been called in to investigate after an armed intruder who reportedly burst into a Lynn Valley condo building Thursday night jumped or fell from a third-floor balcony.

The drama happened around 8 p.m. at the Treelynn condo complex on Fromme Street near 27th Street in North Vancouver. 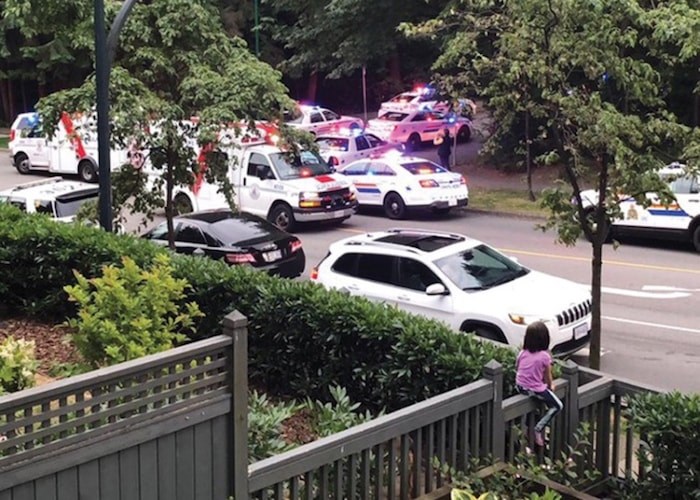 One woman who lives in the building told the North Shore News the man "catapulted over an eight-foot fence" to enter the building through her friend's first-floor patio door. "He flew through her suite," she said, adding the man appeared to be "on something" or not in a normal state of mind.

The man allegedly then entered another suite on the second floor before making his way to the third floor and bursting into an occupied suite there, police told media on Thursday night.

A second neighbour said two women – a mother and daughter – were at home when the stranger entered their apartment.

That neighbour said she understood the mother was the first to see the intruder and yelled at him to get out.

The daughter told other media that the man was holding a knife and appeared scared.

RCMP said in a statement they were called to the building in the 2600 block of Fromme Road after a resident reported “that a man with a weapon was in their apartment.”

After the women left their apartment, the man apparently jumped or fell through the glassed-in third floor balcony window, seriously injuring himself.

Upon arrival, police officers observed a man, who matched the description of the intruder, hanging from a window of a third-floor apartment, said the RCMP in a statement. “The man dropped to the ground and was arrested without incident.”

“We heard the police yelling at him,” said the second neighbour, who didn’t want to be named. “Then he jumped through the glass.”

The first neighbour, who also requested anonymity, said the man appeared to be in "bad condition" after he fell, with "lots of blood loss."

"It's pretty unexpected. Nothing like this has ever happened before and I've been here a long time," she said.

The second neighbour said she considers her Lynn Valley neighbourhood a safe place to live, but there are older people living in the building who are likely feeling stressed by the incident.

The suspect was taken to hospital with serious injuries. Police said the man remains in police custody.

On Friday morning, B.C.’s independent investigations office took over the investigation, and will determine “whether police actions or inactions are linked to the man’s injuries,” according to the RCMP.

The independent investigations office oversees cases where police have been involved in an incident that results in either death or serious injury.

The investigations office is asking anyone who witnessed the incident to call their witness line 1-855-446-8477.