Michael Heaven and his family are raising money for targeted treatments after years of battling disease
Apr 7, 2021 7:01 PM By: Ben Bengtson 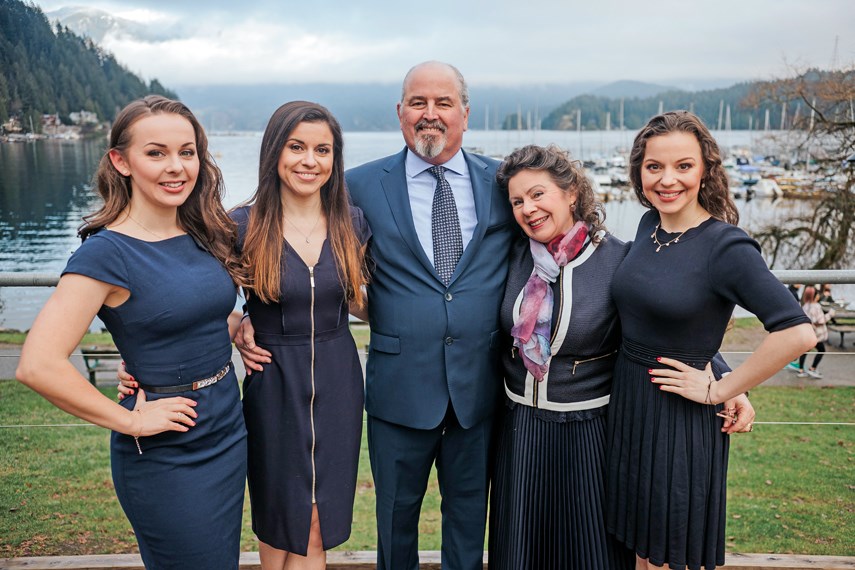 Michael Heaven surrounded by his family – daughters Marissa and Laura, wife Roberta, and daughter Jessica – in Deep Cove in December 2020. Heaven, who has a rare form of male breast cancer, is seeking special treatments abroad with the help of a GoFundMe. courtesy Heaven family
When Michael Heaven first found a lump on his chest in 2016, he knew very little about breast cancer and even less about male breast cancer.

He did what many men might feel inclined to do if faced with a similar situation: he didn’t think much about it.

“I didn’t know much,” said Heaven, who thought maybe he’d pulled a muscle when he first felt the pain in his upper body. “Did I pull it playing tennis?”

Heaven, a North Vancouver resident who lives in the Seymour area, was on a road trip with his wife and three daughters when he eventually got the call from his doctor. It was Stage 2 breast cancer. They drove home immediately.

Following dozens of rounds of chemotherapy, radiation treatment and even a mastectomy, Heaven and his family figured the cancer had gone away in 2018.

“I fought my way through that and asked, ‘What’s next?’” he said.

Doctors said they’d continue to monitor him, but otherwise it appeared he’d come out the other side of a major health ordeal – which had only been compounded by the fact that he had triple-positive breast cancer, which is an extremely rare diagnosis for males.

In general, male breast cancer represents less than one per cent of all breast cancer cases, according to the Canadian Breast Cancer Network.

“I really felt like my life had returned to normal. My kids thought I was in remission,” he said.

Unfortunately, the return to normal hasn’t lasted. Early on in the pandemic last year, Heaven ended up in Lions Gate Hospital with severe back pain.

He learned his breast cancer had metastasised and spread to his spine and the rest of his body. Tumours were also found on his lungs, liver and lymph nodes.

“It continues to progress,” said Heaven. “It’s kind of a terrifying diagnosis.”

Heaven and his family are fighters. While his daughter Marissa describes the family as incredibly private, they’ve decided to go public with Heaven’s case in the hopes of raising awareness for the disease and funds for expensive alternative treatments.

“We’ve had a great [medical] team,” said Marissa. “It was a difficult decision. For me, what made me want to go public is we really realized the treatment he was receiving was not going to allow him to beat this.”

The family is asking for help through an online fundraising campaign for targeted treatments that aren’t available in Canada. So far, the campaign has raised more than $120,000.

“I’ve just been so incredibly grateful,” said Marissa. “I think there’s a huge misconception of what fighting cancer costs. If you’re able to beat it with the protocols that are set out, then that’s fine – but my dad’s cancer is very rare.”

Heaven’s triple-positive diagnosis means his cancer is positive to all three hormone receptors, which is very rare, especially for a man, according to Marissa.

An outpouring of support

The family was recently told that Heaven may only have months to live if new treatment options aren’t considered soon.

Despite there being fluid in his lungs and he can hardly get out of bed, Heaven sounds strong and determined during an interview nonetheless.

“I’m so blown away by what they’ve done,” said Heaven, about his family. “I’m so impressed with my dear wife and her ability to contend with this onslaught.”

He said he has also been blown away by the outpouring of support, love and gratitude he’s received from people all over the world since the fundraiser went live.

Although Heaven said the health care he has received in British Columbia over the years has been “excellent,” he’s hoping that trying out new medical interventions abroad will have him sharing the uplifting tale of his recovery in the near future – as well as a message about the power of recovery for anyone else in a similar situation.

“What I hope to be able to say to everyone in a year’s time is that whatever we found worked, and it’s a story that’s some inspiration to other people,” said Heaven. “Every time I’m able to help someone, or contribute in any way during their journey, especially fighting this horrible thing, I get huge satisfaction.”