After the store’s sign was painted over with graffiti last weekend the business received many offers to start fundraisers or fix the sign for free
May 7, 2021 11:00 AM By: Cameron Thomson 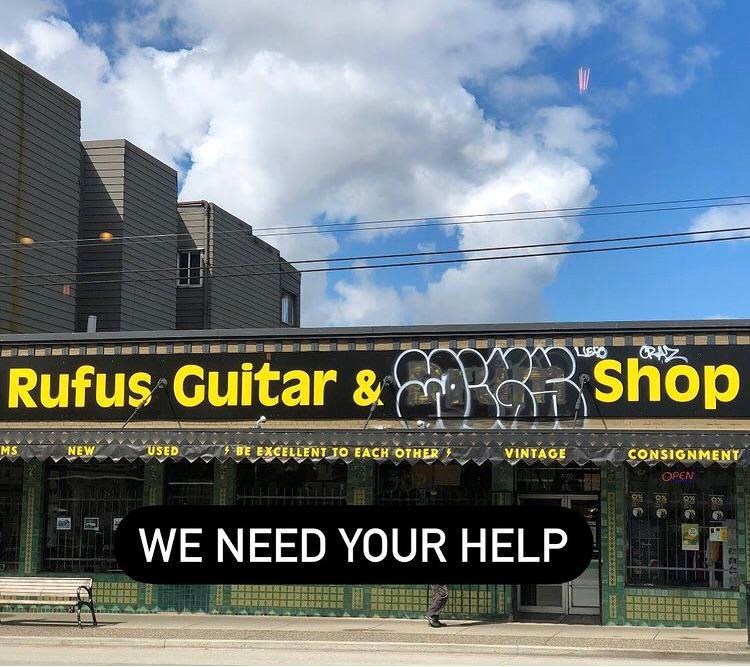 The owner of a local musical instrument store chain is seeing the light of a disturbing act of graffiti that vandalized one of their store locations.

Blaine McNamee owns both the Rufus Guitar and Drum Shop locations in the city, one on Alma Street in Kitsilano and the other on Commercial Drive. On Tuesday this week, his staff noticed the word “drum” had been painted over by a bubble-style, black and white graffiti throw-up. McNamee took to the shop’s social media accounts to ask followers for information on who the artist was.

“We're artists and musicians that work here. All of our employees play in bands and some [in] very successful, internationally recognized bands. For us to be hit like that it was very concerning. It was almost like an attack on us," McNamee said. "Chances are the person that tagged us... they probably listened to a band associated with the business at some point."

The response to the posts was “overwhelming” McNamee says, garnering many supportive comments from the community. McNamee said almost immediately he received offers from people to create a GoFundMe page as well as offers from graffiti removal companies to get rid of the paint pro bono -- which he refused.

"There's lots of businesses in need right now. There's a lot of people that are hurting right now with the pandemic and whatnot,” McNamee said. “At the end of the day yes this is a burden to us, it's gonna cost us money, it's not good. With having to pay for this removal it does affect everybody that works here, it comes directly out our pockets for me to give bonuses or raises."

Through connections in the graffiti art world, McNamee says they knew the artist's name -- not the identity of the person who painted it -- within a few hours of the post going up.

In graffiti terminology, a tag is like an artist's signature but for their artist name. It is designed in the artist's own style and is generally painted in one continuous line so it can be done quickly to evade law enforcement. Throw-ups on the other hand are more elaborate versions of an artist's tag and can be made in many different styles, like the bubble style seen on the guitar shops sign. Two tags can also be seen just above the word “shop” on the sign.

McNamee says he found a company that will be able to take the paint off without needing to replace the entire sign, and, while it will be expensive, McNamee says one of Rufus' bigger suppliers is going to pay for half the removal costs.

"If I could talk to the person who did this, I would want to know why. Why did you attack a group of musicians and artists? What was the point of this? I understand graffiti, I understand street art but there's a time and a place for it," McNamee concluded saying if the artist comes forward he will not press charges.