A portion of the Saik'uz First Nation reserve has been scratched off the list of places where clues might be found into the disappearance of an entire family three decades ago.

No evidence was uncovered, Prince George RCMP said Tuesday, when the detachment's serious crimes unit carried out a search of the area over three days in late August with the help of civilian experts, ground-penetrating radar and heavy equipment.

Husband Ronald (Ronnie) Jack, wife Doreen, both 26 years old, and children Russell, 9, and Ryan, 4, were last heard from during the early morning of Aug. 2, 1989 when Ronnie called his parents in the Burns Lake area.

It is believed that shortly after that phone call, the family departed their home on Strathcona Avenue in Prince George with an unknown man in a dark-coloured four-wheel-drive pickup truck.

RCMP said it appeared Ronald Jack met the man the evening before at the First Litre Pub, about four blocks away from their home, where the couple were offered jobs at a logging camp or ranch thought to be near Clucluz Lake.

The two went back to the Jacks' home and during the early morning hours of the next day, Ronald called his parents to say he and Doreen were leaving for a "camp job," RCMP have said.

It also appeared they took their children along after they were told there was daycare at the camp. Ronald had indicated to his parents that they would be gone for about 10 days, and that they would be back for Russell to start the school year in September. However, they never returned and they were reported missing on Aug. 25, 1989.

The man is described as Caucasian, 35 to 40 years old, with reddish-brown hair and a full beard, 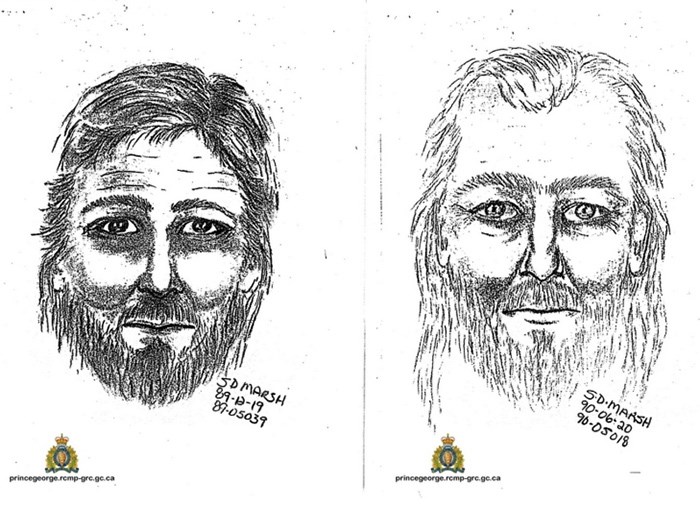 x An RCMP sketch of a suspect in the disapparance of the Jack family in 1989. – RCMP HANDOUT IMAGES

Anyone with information on the incidents is asked to call Prince George RCMP at 250-561-3300 or anonymously contact Crime Stoppers at 1-800-222-8477 or online at www.pgcrimestoppers.bc.ca (English only).

You do not have to reveal your identity to Crime Stoppers. If you provide information that leads to an arrest or recovery of stolen property, you could be eligible for a cash reward.