NDP leader Jagmeet Singh leaves the boardwalk after speaking to the media during a campaign stop at Granville Island in Vancouver, B.C., on Monday, October 14, 2019.
Oct 14, 2019 2:54 PM By: The Canadian Press 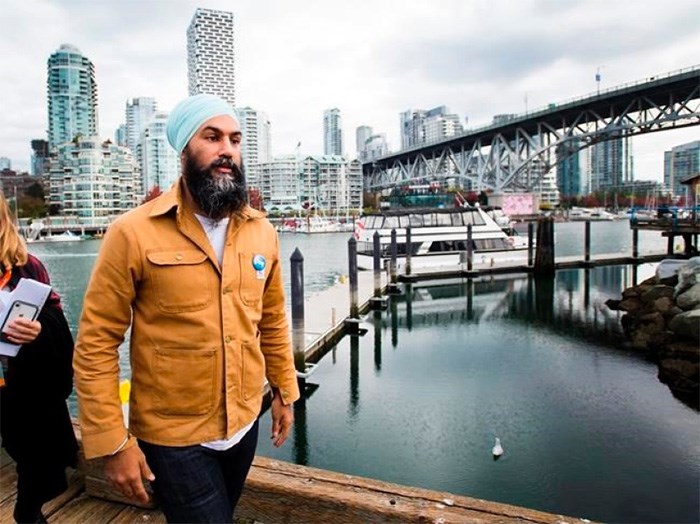 NDP leader Jagmeet Singh leaves the boardwalk after speaking to the media during a campaign stop at Granville Island in Vancouver, B.C., on Monday, October 14, 2019. THE CANADIAN PRESS/Nathan Denette

NDP Leader Jagmeet Singh is campaigning in Vancouver today, trying to capitalize on the upswing his party has seen in the polls.

Singh has spent the last two days campaigning in British Columbia to shore up votes in ridings that polls suggest are tight three- and four-way races in the lower mainland of his home province.

The New Democratic leader has been bolstered by a shift in momentum that has him considering what role he could play in a possible minority government as the Liberals and Conservatives appear to remain deadlocked.

Singh opened the door to the possibility of a coalition Sunday, saying his party would "absolutely" consider joining forces with the Liberals to prevent a Conservative minority government.

Today he wanted to focus less on his potential role as kingmaker, and more on his message to voters that they need not limit their options to the Liberals or Conservatives.

Singh began his day in Vancouver's Granville Island, cheering on runners participating in the Turkey Trot Run and shaking hands with people in and around the shops along the boardwalk, and will meet later today with hotel workers on strike in downtown Vancouver.

This report by The Canadian Press was first published on Oct. 14, 2019.