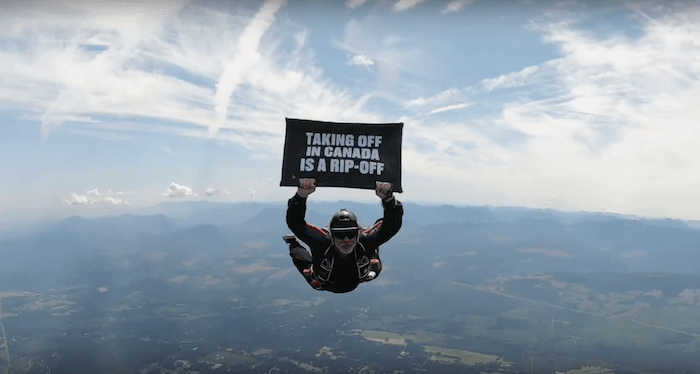 "Flights in Canada are a rip-off."

In order to rally Canadians, investors and the Competition Bureau around the idea of increased competition and decreased airfares, 18 skydivers and the Jetlines CEO used four planes to stage their sky-high protest.

The cost-effective carrier also encouraged travellers to go Jetlines’ website and sign an online petition that will be presented to the Canadian Competition Bureau. It notes that the Bureau has done little to address the issue, and that several airlines have tried to enter the Canadian market. However, Canada Jetlines notes that the duopoly - Air Canada and WestJet - push these airlines out with, "short-term match-pricing at prices below their avoidable costs."

“Canadians pay among the highest airfares in the world and we’re the only developed country without an ULCC as two high cost airlines control approximately 85% of the domestic market,” says Javier Suarez, CEO for Jetlines.

“We know Canadians are fed up as there are between five and six million passenger trips per year by land over to the US each year to fly on US low cost carriers, based out of northern US airports, that in many cases only operate from those airports due to the robust Canadian passenger traffic. We’re urging consumers to go online and to show their support for more competition and lower fares in Canada.”

Under Canada’s competition laws, predatory pricing occurs when an incumbent with market power sets its prices below avoidable costs.

When the Vancouver-based Canada Jetlines (TSX:JET) first stated an aim to launch flights that had the lowest possible base fare, with fees to cover everything from carry-on bags, to seat selection to cups of coffee, it was early 2014, and the planned launch date was the end of that year.

Its plan is to eventually ramp up to operate flights across Canada and provide non-stop service from Canada to the United States, Mexico and the Caribbean.

With files from Business In Vancouver.