A journalist who was killed while covering the war in Afghanistan almost 10 years ago was remembered Thursday with a memorial plaque at the high school she attended in Vancouver
0
Nov 8, 2019 7:20 AM By: The Canadian Press 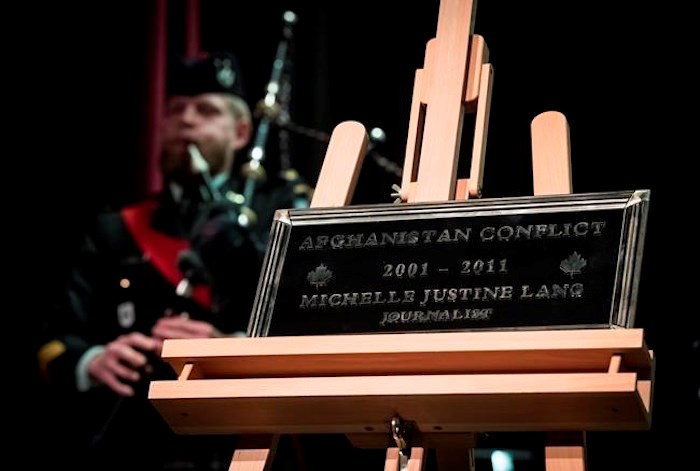 A plaque honouring Calgary Herald journalist Michelle Lang, who was killed while working in Afghanistan in 2009, is unveiled as Sgt. Daniel Bell, of the Seaforth Highlanders of Canada, plays bagpipes during a Remembrance Day ceremony at her high school, Magee Secondary School, in Vancouver, on Thursday November 7, 2019. Lang, 34, and four Canadian soldiers died when the armoured vehicle they were traveling in struck an improvised explosive device on the outskirts of Kandahar. THE CANADIAN PRESS/Darryl Dyck

VANCOUVER — A journalist who was killed while covering the war in Afghanistan almost 10 years ago was remembered Thursday with a memorial plaque at the high school she attended in Vancouver.

Michelle Lang and four Canadian soldiers were killed when a military patrol hit an improvised explosive device buried in the road near Kandahar City on Dec. 30, 2009. She was 34.

Lang's parents said they were grateful that Magee Secondary School recognized their daughter with the plaque.

"We think about her all the time."

A ceremony attended by her friends and family was held in the school's auditorium, which holds about 500 people and was full.

Lang was covering the war for the Calgary Herald and although she was an award-winning journalist, her parents remember her as a painfully shy child.

"She would cry when people talked to her when she was small," her mother recalled. "She truly grew out of it."

The last time Art and Sandra Lang spoke to Michelle was from Kandahar a few days before she died. They thought it was one of the safer times for their daughter to be embedded with Canadian troops because it had been fairly quiet and it was around the Christmas holidays.

"After she died there was a huge hole in our lives," said Sandra.

Catherine Lang, her aunt, described Michelle as a fun-loving person with a creative streak.

Catherine Lang said she is sometimes overcome by sadness when she sees people who are around the same age as her niece.

"Although she was an exceptional person to us and our family, she was an average Canadian," she said.

"If she was walking down the street you might have noticed her smile."

This report by The Canadian Press was first published Nov. 7, 2019.