B.C. Lions offensive tackle Jovan Olafioye holds the trophy for Most Outstanding Offensive lineman trophy as he poses for photographers during the CFL awards show in Toronto Thursday, November 22, 2012.
0
Jul 5, 2018 9:01 AM By: The Canadian Press 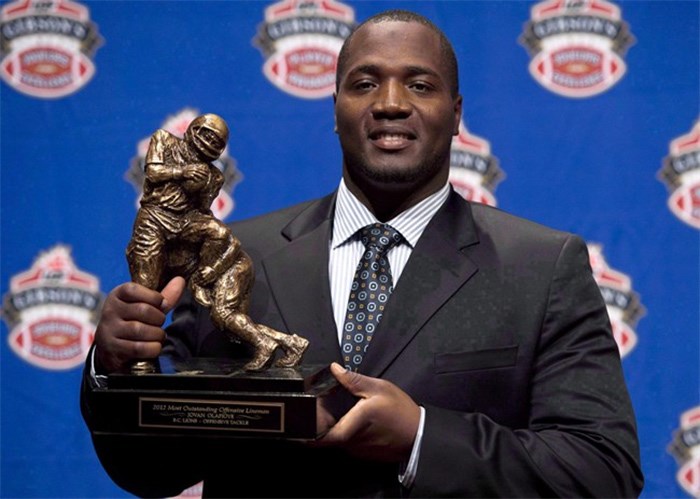 B.C. Lions offensive tackle Jovan Olafioye holds the trophy for Most Outstanding Offensive lineman trophy as he poses for photographers during the CFL awards show in Toronto Thursday, November 22, 2012. Vancouver’s notoriously tough housing market is posing problems for at least one professional football player. Offensive lineman Jovan Olafioye has been struggling to lock down a rental home since he returned to the B.C. Lions in May. THE CANADIAN PRESS/Sean Kilpatrick

Jovan Olafioye has made a career out of protecting CFL quarterbacks from some of the league's most fearsome pass-rushers, but this season, he felt like he was in danger of being sacked by Vancouver's notoriously tough housing market.

Now the star B.C. Lions offensive lineman feels like he's about to lock down some lodgings after a Twitter post about his housing woes resulted in numerous calls and offers of accommodation.

"It has been really stressful, but it's nothing I can't handle, really," said Olafioye, who returned to Vancouver in May following a year-long stint with the Montreal Alouettes.

He's been living out of a suitcase ever since he got back to the West Coast. While he's had trouble finding a place to live before, the 30-year-old said this round has been especially stressful because his family and two young kids have been staying back in Pittsburgh.

He's looking for a furnished two-bedroom place close to a SkyTrain station for a five or six-month lease, to cover football season.

It's a tall order for Metro Vancouver, a region that the Canadian Mortgage Housing Corporation said had a 0.9 per cent vacancy rating in November.

The same report pegged the average monthly rent for a two-bedroom apartment in the area at $1,552.

Olafioye said he's grateful to the football fans who have stepped up to help him with his search.

"Vancouver's always been good to me and I appreciate the good responses, the good motivating responses," he said.

The six-time CFL all-star noted that some of his teammates are still looking for lodging and in the meantime, they've been staying in hotels and Airbnbs. He hopes they have the same good luck he's had.

Lions' head coach Wally Buono said the team asked the CFL for an early bye-week this year, knowing some of their players would need time to find a place to stay and get settled.

It's a tight rental market and landlords don't want to sign leases for six months, he said.

But Buono hopes Olafioye's story inspires some people to offer up their unused properties.

"It's hard. Players come with their wife, young children to rent for six months. It's hard. So if there's a fan who has a basement suite and its not doing anything ..." he said, his voice trailing off.