A Metro Vancouver dairy farmer is at a loss to explain why someone would shoot several arrows into a five-day-old calf, ensure it was dead and then make off with the carcass.
0
Aug 9, 2019 7:24 AM By: The Canadian Press

LANGLEY, B.C. — A Metro Vancouver dairy farmer is at a loss to explain why someone would shoot several arrows into a five-day-old calf, ensure it was dead and then make off with the carcass. 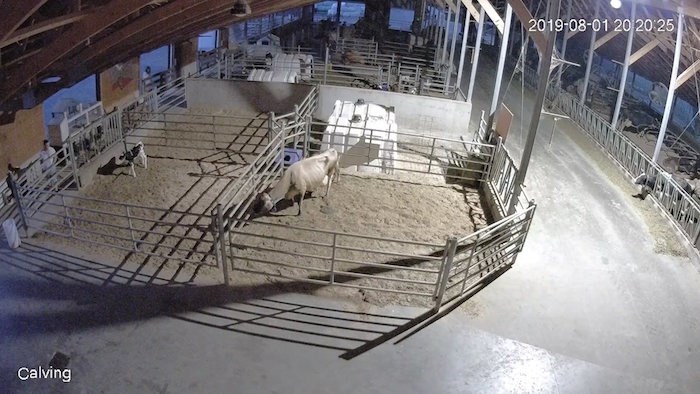 A man, at far left bottom, is caught on surveillance camera entering a pen holding a five-day-old calf. He and his accomplice, a woman seen at far left top of the image, are believed to have shot the calf with arrows, before the male suspect stabbed the calf to death with an arrow. Eagle Acres Dairy/Facebook

Erin Anderson, who co-owns Eagle Acres Dairy with her husband in Langley, B.C., says they came out to "a bloody scene" in the early morning of Aug. 1 and believed a coyote may have taken the calf.

But the couple had recently installed closed circuit video cameras and instead of seeing an animal, they watched a man and woman enter the barn and shoot the calf with four to six arrows.

Anderson says the calf didn't die and the video shows the man pulling out one of the arrows and using it to stab the animal repeatedly, then putting the dead calf in the trunk of a BMW and driving away.

"Early in the morning on Aug 1st, two people trespassed onto our property and brutally killed [a] 5 day old calf...They then loaded the calf into what the RCMP believe to be a high end SUV, possibly a Mercedes or BMW and drove off. From the video they are well dressed and appear to both be of Asian descent, one male and one female," writes Eagles Acres Dairy on their Facebook page.

RCMP Cpl. Holly Largy says investigators are reviewing the surveillance video showing a man and woman drive up to the barn, enter the enclosure and attack a calf.

Anderson says the calf's mother was out of the barn during the violent attack on an animal that had no fear of humans.

"We're the caretakers of these animals. From Day 1 when they are born every human that they see and is working around them is there to help them and protect them," Anderson says.

"This calf went to him, it had no fear of him because it has learned already in five days not to fear humans because they're either going to feed me or be nice to me or love me or whatever."

A group of children from an out-of-school care program had been at the farm the day before the death to feed the calf, Anderson says.

Largy says in an email statement that the investigation is active and police are hopeful they can enhance photos clipped from the barn's surveillance video, but she says there are few other clues.

-with additional reporting by Vancouver Is Awesome