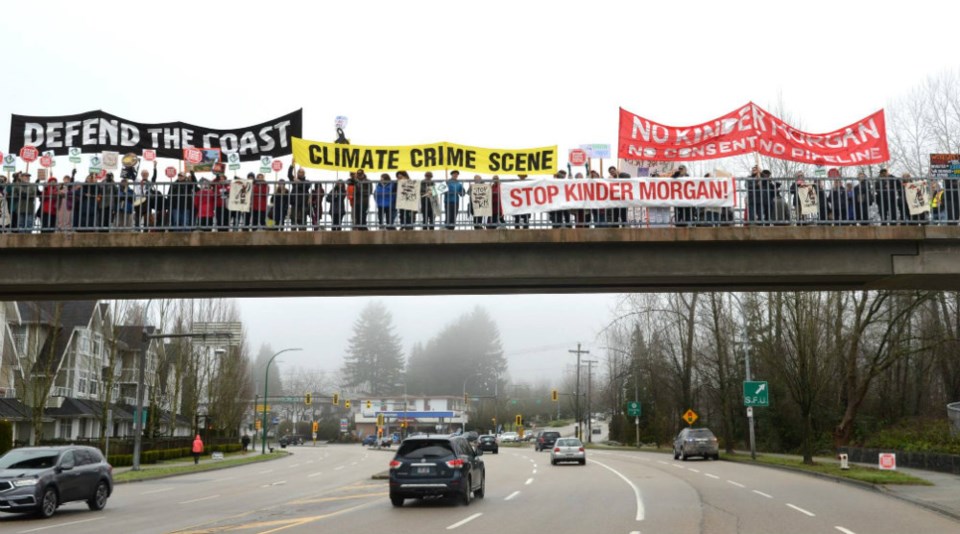 Green Party Leader Elizabeth May tweeted, "Kinder Morgan laughing all the way to the bank. KM gets $4.5billion and walks away. Canada to raise money to build $7.4 billion project."

Over 200 people, including May, were arrested on Burnaby Mountain in recent months protesting the pipeline. Opposition to the pipeline has spread across the country and a protest against the Trans Mountain expansion was held in Montreal on Sunday, May 27.

“Prime Minister Justin Trudeau's government has just signed up to captain the Titanic of tar sands oil pipelines, putting it on a collision course with its commitments to Indigenous rights and the Paris climate agreement," says Mike Hudema, a climate and energy campaigner at Greenpeace Canada.

Will George, Tsleil-Waututh member and spokesperson for the Coast Salish Watch House says, “this is the moment in history where Justin Trudeau has revealed that he never cared about Indigenous rights or reconciliation."

"The cost that they did not calculate in their $4.5 billion purchase is that Indigenous front lines will stop this pipeline,” says George.

Stand.earth is one of the groups organizing a rally at Science World on May 29 at 5:30 p.m. and campaigner Sven Biggs says they will be continuing to run ongoing blockades in Burnaby and other places around the province.

"We're going to continue to keep up pressure on the Liberal government. Folks can look forward to more actions and protests targeting Liberal MPs and Liberal events here in British Columbia," says Biggs.

In a release, Stand.earth says the $4.5 billion buyout cost doesn't include Kinder Morgan's previously documented $7.4 billion for construction costs, or the significant potential for costs related to construction delays. According to Stand.earth, the real cost to taxpayers could easily top $12 billion.

Climate Convergence Metro Vancouver plans to drop banners with anti-pipeline messages across the Willingdon Overpass in Burnaby, the Hastings Pedestrian Overpass and Stanley Park Overpass on May 30.

In a release, Kinder Morgan says the Canadian government has agreed to fund planning and construction work on the Trans Mountain expansion project (TMEP) by guaranteeing the project's expenditures under a separate federal government recourse facility under the deal closes.

"We are pleased to reach agreement on a transaction that benefits the people of Canada, TMEP shippers and Kinder Morgan Limited (KML) shareholders," says KML chairman and CEO Steve Kean.

Kinder Morgan plans to twin its existing Trans Mountain pipeline running from Edmonton to Burnaby, which would triple the volume of petroleum products it would carry and increase tanker traffic along the coast from 60 to over 400 vessels per year.

"Our Canadian employees and contractors have worked very hard to advance the project to this critical stage," Kean says.

The BC Chamber of Commerce says its pleased the pipeline will be built but cautions that investor confidence is still shaken.

“It’s long-overdue good news that Canada will get its resources to tidewater and stop selling to a single customer – but the fact that our federal government had to step in proves there’s still deep uncertainty around investing in Canada, says Val Litwin, president and CEO, BC Chamber of Commerce. "Our nation must take a hard look at itself: The regulatory regime in Canada is broken.”

The company's deal with the feds is expected to close late in the third quarter -- covering July, August and September or early in the fourth quarter.

The government has agreed to work with the company to find a a third party buyer for the pipeline project through July 22, 2018.

"We are able to pursue this project with confidence, because we know that we are upholding the trust Canadians have placed in us to both grow our economy and protect our environment," Finance Minister Bill Morneau tweeted this morning.