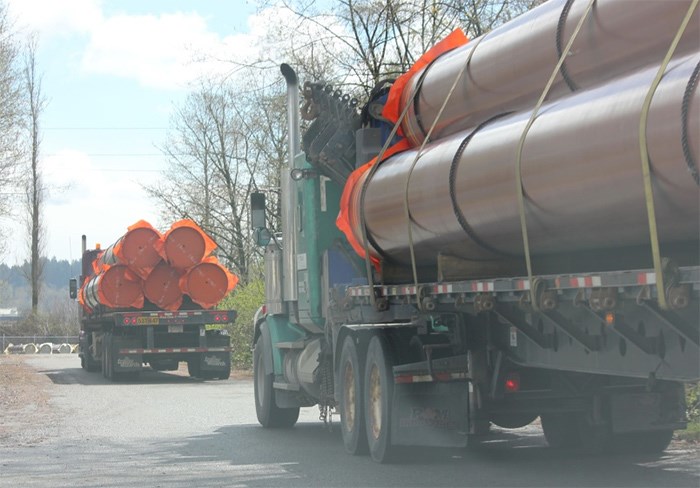 Kinder Morgan is delivering pipes to New Westminster which will be used to carry diluted bitumen through the Lower Mainland. The company announced last week they would be halting all non-essential spending on the project.

Peter McCartney, a campaigner with the Wilderness Committee in Vancouver, took photos of trucks carrying pipes arriving at the staging facility at 430 Canfor Ave. in New West last week, and saw more pipes delivered to the facility on Monday. He said the group has been monitoring that site the last six months after learning Kinder Morgan would be storing the pipes at that location.

Seeing the shipments arrive is making him feel nervous, he said.

“I think it should make it real for people that Kinder Morgan is still in this,” he told the RECORD. “I think the images of pipes should really keep people focused. What we don’t want people to do is sit back and relax, because Kinder Morgan is coming for us.”

McCartney said the pipes arriving is something the group has been anticipating for a long time, and seeing them means the next stage of the “fight” is starting.

“(I am) pissed off that these pipes are arriving without the consent of communities around that route, and … this is a real visual sign that they are here and ready to go.

“That just frustrates the hell out of me.”

When asked about continued work at the site, Trans Mountain reiterated the company’s position that it had stopped “non-essential spending” on the expansion.

“With a project of this scope and size, there is a long lead time required for the procurement of materials and the contracting of work,” reads an email response from the company. “As such, materials that were ordered and were in transit prior to last week’s announcement are arriving at worksites and some essential work that has already started may be continuing.”

In Burnaby, trucks have been seen coming and going from the terminal as workers continue to bring sediment, trees and water out of the facility. Workers are culverting creeks that run through the property, and preparing for excavation of new tanks. 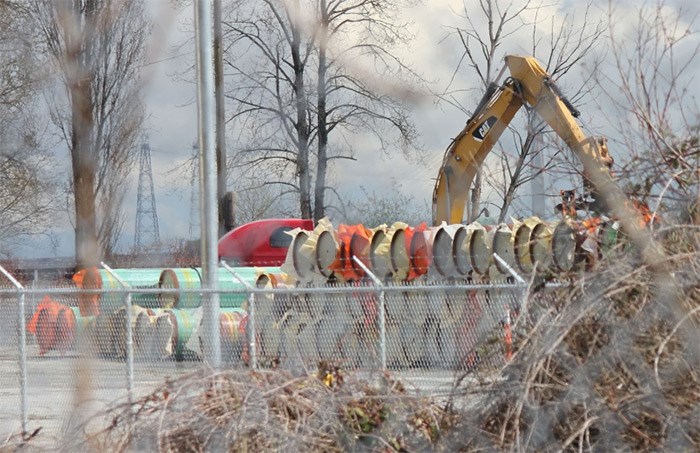