There is a heavy police presence surrounding Vancouver’s Langara College this afternoon after the school had to be evacuated due to a fire that police believe was deliberately set.
Apr 1, 2019 3:53 PM By: Jessica Kerr

There is a heavy police presence surrounding Vancouver’s Langara College this afternoon after the school had to be evacuated due to a fire that police believe was deliberately set.

Vancouver police media relations officer Sgt. Jason Robillard said that officers were called to Langara earlier Monday afternoon after reports of a fire. He said that police and firefighters worked to evacuate the school and 49th Avenue is closed to traffic between Ontario and Alberta streets. 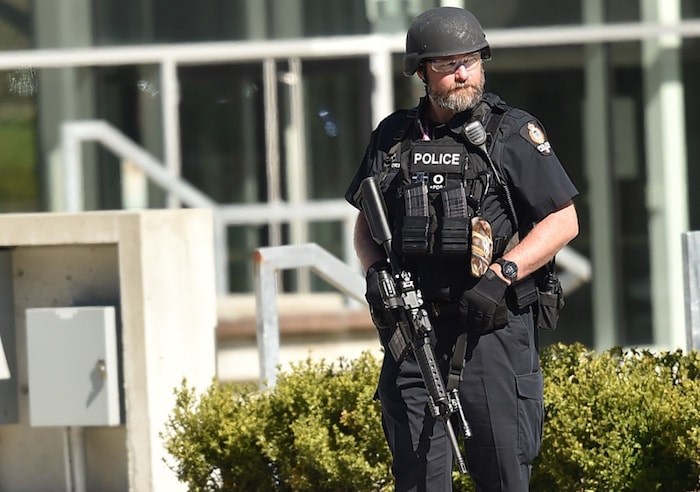 There was a heavy police presence around Vancouver’s Langara College Monday afternoon after the school was evacuated due to a fire. Police believe the fire may have been deliberately set. Photo Dan Toulgoet

“At this point, it appears that the fire may have been deliberately set,” Robillard said. “Police are on-site to ensure the safety of staff, students and residents of the neighbourhood.

“Right now, our officers are systematically going through the school to identify any additional hazards.”

The school posted on Twitter that all classes and exams were cancelled for the rest of the day.

Nursing student Bal Sekhon had just finished writing an exam and was heading to the library to study when, she said, students were initially evacuated from the science and technology building (also referred to as the T building) and the library. She said they were initially allowed back in a short time later.

Sekhon said she was studying for her next exam in the library when about 20 minutes later at around 12:50 p.m. a police officer came into the library and told students and staff to leave immediately.

“As we were walking out, we saw the guys with the rifles and the helmets walking in.”

No injuries have been reported.