Leah Bliss at her and Dan’s Squamish home. The glass in the background says “Happy Birthday Olive,” for the couple’s daughter.
Jun 22, 2018 4:08 PM By: Glacier Media 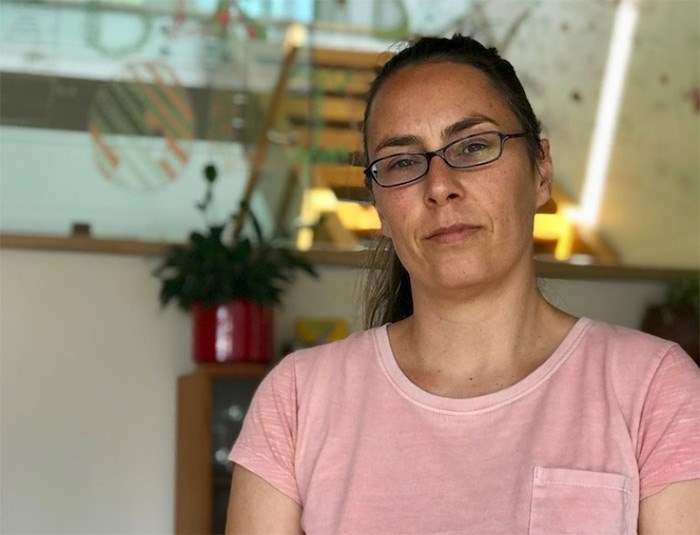 Leah Bliss at her and Dan’s Squamish home. The glass in the background says “Happy Birthday Olive,” for the couple’s daughter. Her birthday took place while Dan was prepping the boat for travel in Panama and they left it up for him to see when he returned.

Leah Bliss speaks about her husband and love of her life, Dan Archbald, in both the present and past tense — sometimes even within the same sentence.

Archbald, 37, went missing on May 16 along with his friend and sailing partner Ryan Daley, 43, after the pair disembarked from their sailboat in Ucluelet after an eight-week voyage from Panama.

They were believed to be heading to Jordan River on Vancouver Island, where Daley has property, for a few days of surfing before returning home to Squamish.

An extensive search ensued once friends and family became concerned after not hearing from either man, as would have been expected.

On Friday, June 15, the remains of two bodies were discovered near Ucluelet. Personal items were also found in the area, but it is unclear at this time who they belong to. Autopsies are being performed by the BC Coroners Service and Bliss said she hopes to have a definitive answer by the end of the week.

She acknowledges that from the outset she wasn't optimistic.

"I've felt [they were dead] for a long time. I felt it from the beginning when the search started. I felt like it was too late," said Bliss, describing the experience as "horrific."

"I think I'll be haunted forever by some of the moments I had during the search. Your mind is racing with the possibilities. One minute you're hopeful that he's somewhere, and the next you are in a deep despair thinking of what may have happened. It's really unsettling.

"It would be good to have closure but at the same time the thought that maybe he's out there somewhere... I don't know what I want this point," said the stay-at-home mom, who shares two girls — Josie, 5, and Olive, 9 — with Archbald. "Our whole world has been turned upside down."

As the week draws to a close and the results of the autopsies are likely to be provided, Bliss said she has mixed feelings.

"In that way it will be nice having closure. Having at least part of an answer to what happened.

"It's hard looking at the girls and knowing what they've lost. They don't really know and probably won't really understand until they're older — but they lost so much in Dan. Not just a father, but a friend and someone who loved them more than anything and would have done his best to guide them through their lives."

Right now the biggest challenge for Bliss next to the emotional is dealing with the financial uncertainty the family is facing. Because of the investigation, unanswered questions, and lack of a death certificate, Bliss is unable to even sell the truck the couple own that is registered in Archbald's name. They are renters in a market that has been unforgiving over the years, homeownership elusive.

"We've moved four times in seven years, we really had hoped to stay put for a while," she said, adding now that their youngest is entering full-time school she had planned on returning to work. "The last time we moved the girls said they wanted this to be their forever home. I'm so tired of moving."

Solace for Bliss comes in the form of looking at family pictures, enjoying Dan's paintings and artwork, and reminiscing about their days as fancy-free climbers in Squamish where they first met and fell in love 13 years ago. But the one time that Bliss's face truly lights up is when she pulls out The Curve of Time, a historical book by M. Wylie Blanchet the couple picked up on the ferry last summer when they were camping as a family at Cape Scott.

While speaking, Bliss has sat calmly and spoken thoughtfully about her situation. For the most part, she remains composed, but that changes when she begins to explain the future the couple thought they would share with their young children. This is when she breaks down. 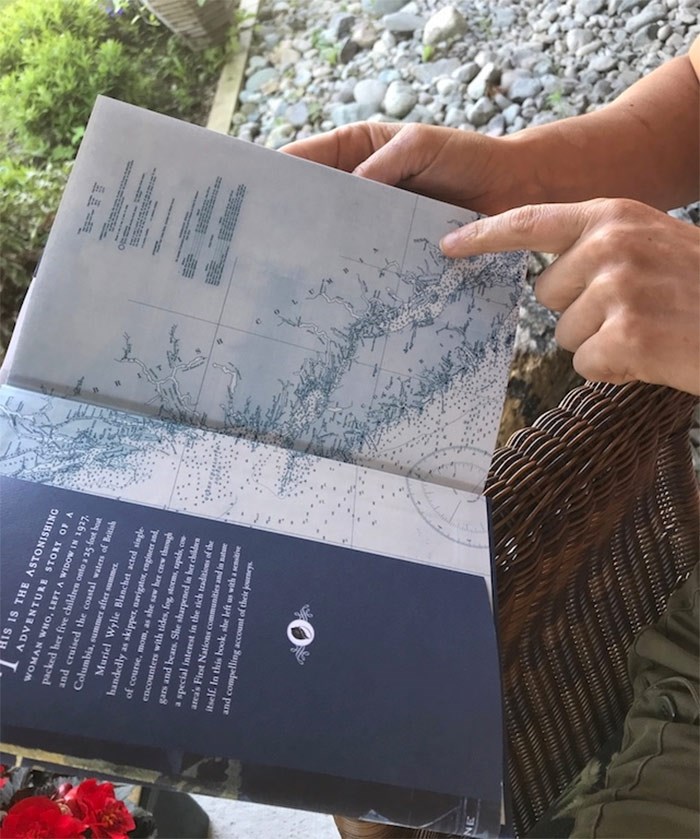 Bliss flips through The Curve of Time by M. Wylie Blanchet, a book that reminds her of the plans she and Dan shared. – Kirsten Andrews

"We both loved this book," she said, thumbing its pages gingerly, tears running down her cheeks. "It's about a widow who sailed around the coastal waters of British Columbia with her five children in 1927. We wanted to do that with our boat. We wanted to see and do those things — I think the girls would have become really adept sailors with Dan's knowledge of boats. He would have taught them. At one point they'd be able to take that over and have that passion and that knowledge."

Bliss describes Archbald as "a positive person who has a really good heart and an easy-going way about him." They knew early on that they wanted to stay in Squamish and raise a family — ideally with two children. They shared a taste in music and film, a mutual love of photography and art, and a passion for the outdoors.

"It was a good meeting of the minds: He was an artist and I loved his artwork. I'm a writer he loved my writing. He liked all my ideas about it and we really love feeding off of each other, and in that I've lost… I don't know… he was a good person. He's definitely my best friend," she said, crying. "I think about all those plans, all those dreams, the dreams we had with the sailboat. Dan was amazing with sailboats. He had the dream of us just travelling around here being on the sailboat. He was hoping that there would be another marina down here that he could help manage."

The mystery of the situation is a tough pill to swallow for Archbald's family. Negative comments on a Facebook page about Archbald and Daley as to what might have brought about such a disappearance resulted in the page recently being taken down.

"Dan was just a really good person. He is the type of person who if you were his friend and you called him up, and you needed him for whatever reason he would be there. He always believed the best in people. It is almost like a naïve way of looking at people. We were always helping people, always in it for each other, and for the good of everybody.

"I just want people to know he was really a good person. I feel it's getting lost in all the speculation that's going on. **

Travelling to Ucluelet weeks ago to help with the search and to see the boat he had purchased with friends for the very first time was intensely traumatic for Bliss.

"I had only ever seen photos of it, and when we got to the boat and I got to see where he spent his final days all I could think about was what could've been. I just remember sitting there, looking in the boat and imagining us, imagining the girls and their dad, and the times we could've had. It's hard to explain what we've lost. The girls have lost their father. I've lost my partner. I've lost my dreams. I've just lost a piece of myself — it's never going to come back. It's just heartbreaking."

Finding a way through the fog of this ordeal is overwhelming, she said.

"It's like you know you're about to hit rock bottom and you want to somehow do it gracefully and with dignity, but you can't see how," said Bliss. "All you know is that it's coming and once you get there then at one point you'll somehow start climbing back out and up. And then slowly you'll begin having new dreams and seeing a new future for yourself. But right now that seems so far away and so impossible because you're still mourning all that you've lost, and you're not ready to accept the new life ahead of you. Right now there is so much paperwork, and organizing, and letting go, and counselling that needs to be done. I can't do it all overnight and I can't do it without help."

Friends, family and the community are stepping up to help her and the couple's children. A Go Fund Me campaign "Crisis Fund! Leah, Josie and Olive," was launched within the last few weeks to raise money for Bliss and her daughters. Other community members have come forward to organize a fundraiser at The Joinery on Friday, July 20 from 7:30 p.m. to midnight for a silent auction and night of food and socializing. A friend of the couple has designed his own birthday celebration this Saturday as a fundraiser, requesting guests donate for for catered evening celebration. Still, others are coming together as a group of friends to help formulate a longer-term financial plan for Bliss and her children.

"I'm so thankful to live in such a caring and compassionate community. This community is a big reason why Dan and I always wanted to live in Squamish and why we were still here even though it has been a struggle," she said, adding she doesn't like asking for help.

"Everyone wants to know how they can help and lots of the time I don't even know what to say, so much of it, I have to do on my own. But just the support I need to get on my feet and get it done is amazing. It's hard to accept sometimes, but I know I need it. This is all a process and it's unfolding around me and I'm trying to figure it out as I go, the best I can, one step at a time for my girls."