B.C. Attorney General David Eby said Oct. 15 that Victoria has reached a framework agreement with the province’s legal aid lawyers to provide stable access to justice for those unable to afford lawyers.
Oct 16, 2019 6:54 AM By: Jeremy Hainsworth 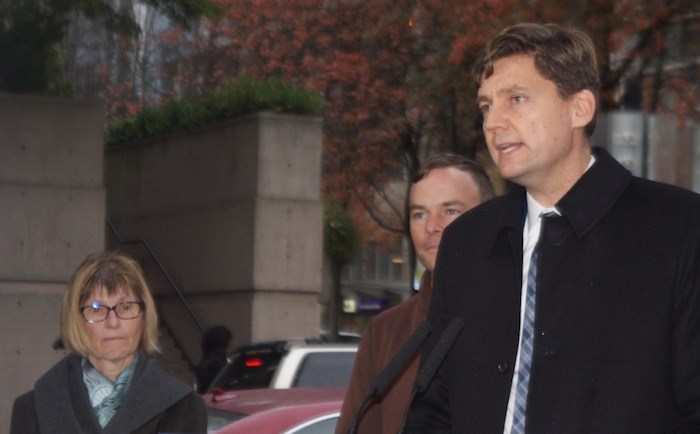 B.C. Attorney General David Eby said Oct. 15 that Victoria has reached a framework agreement with the province’s legal aid lawyers to provide stable access to justice for those unable to afford lawyers.

While no money was put on the table Tuesday, the government said the agreement means more lawyers will be available to take on legal aid work and increase access to justice for marginalized people.

Eby said the agreement is with the Association of Legal Aid Lawyers (A.L.L.) and the Legal Services Society (LSS), which provide low-income people with financial support to hire a lawyer to advise and represent them in criminal, refugee and child welfare hearings.

The announcement comes after Eby last year announced almost $30 million over three years for legal aid as well as another $7.9 million for the development of a new framework for legal aid funding after legal aid lawyers threatened to withdraw services.

"For more than a decade, legal aid lawyers have delivered services to British Columbians at below cost in order to help the most vulnerable members of our province," Eby said. "The long-running underfunding of legal aid was profoundly unfair to British Columbians, especially in rural communities where there have been fewer and fewer lawyers – in some cases no lawyers at all – willing to take on dramatically underpaid legal aid cases. Those bad old days are behind us.”

The new agreement establishes a formal and ongoing negotiating relationship between A.L.L., LSS and the government – a relationship that previously did not exist, despite government having similar relationships with almost every other sector of the justice system, including judges, Crown counsel, sheriffs and administrative staff.

Government, A.L.L. and LSS also agreed to establish an ongoing policy consultation process to discuss legal aid policy and access-to-justice issues during the term of the agreement.

He said all too often the most underpaid lawyers in cases were representing those in most need of help.

Both Nancy Merrill, president of the Law Society of British Columbia, which regulates lawyers, and Jean Whittow, chair of LSS, which operates the legal aid system, welcomed the announcement.

“The provincial government is recognizing the important role legal professionals have in ensuring that vulnerable British Columbians have access to advice and representation for their legal problems,” Merrill said.

“With increased rates, LSS is confident it can attract and retain lawyers that can meet the legal needs of low-income people in British Columbia,” Whittow said.

The framework agreement comes after a review of the system by lawyer Jamie Maclaren released in March. A 2011 review by lawyer Len Doust also contributed to changes being made, Eby said.

“Legal aid is not broken in B.C. It has simply lost its way,” Maclaren said in his report. “Years of underfunding and shifting political priorities have taken their toll on the range and quality of legal aid services, and especially on the people who need them. Still, the will exists in B.C. to make legal aid more accessible and effective for all of its many users.”

Doust made nine recommendations. Included were suggestions legal aid be recognized as an essential public service; that core services and priorities be defined; that financial eligibility be modernized and expanded; that regional legal aid centres and innovative service delivery be established; and that public engagement and political dialogue be expanded.

He further advocated an increase in long-term, stable funding; that the system be proactive, dynamic, and strategic; that there be greater collaboration between public and private legal aid service providers; and that legal aid providers receive more support.