Federal Minister of Families, Children and Social Development Jean-Yves Duclos is seen at a youth homelessness organization in Toronto on Monday, June 11, 2018. Duclos announced an expansion of Ottawa’s initiative to combat homelessness in Canada.
0
Jun 11, 2018 11:16 AM By: The Canadian Press 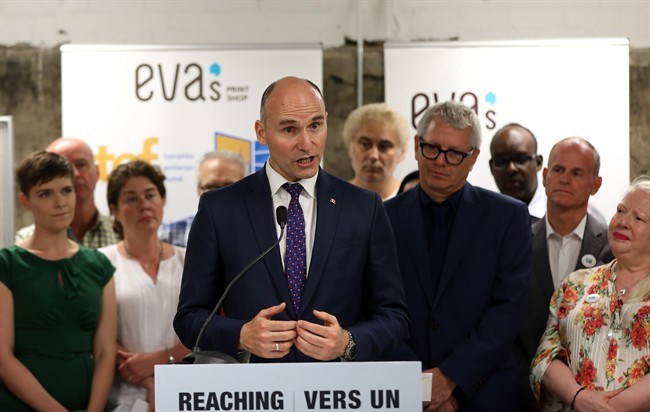 Federal Minister of Families, Children and Social Development Jean-Yves Duclos is seen at a youth homelessness organization in Toronto on Monday, June 11, 2018. Duclos announced an expansion of Ottawa’s initiative to combat homelessness in Canada. THE CANADIAN PRESS/Colin Perkel

Cities working to get homeless Canadians off the streets and into homes will be given more money and fewer spending restrictions under a revamp of the Liberal government's centrepiece homelessness program.

New rules unveiled Monday will give cities leeway to spend money on local initiatives and experiments — so long as they can meet Ottawa's goal of cutting in half the number of chronic homeless people in their midst.

Chronically homeless make up a small number in the overall homeless population, but they are among the heaviest users of emergency shelters.

New cities will become eligible for funding to take into account demographic shifts, particularly population growth out west. Eligibility for the existing 61 cities and towns in the program is based on demographic information now two decades old.

The revamped homeless strategy, redubbed "Reaching Home," will spend $2.1 billion over the next decade.

The minister in charge of the file said Monday that there will also be new spending on top of that targeting Indigenous Peoples — a group over-represented in shelters compared to their percentage of the general population — but how much will be spent remains unclear.

"Everyone deserves a safe and affordable place to call home because one person the streets in Canada is one too many," Social Development Minister Jean-Yves Duclos told a news conference in Toronto.

"As a country, Canada must do everything it can to reduce homelessness, meet the needs of vulnerable populations and provide every Canadian a safe and affordable place to live."

The changes are also expected to allow money to be spent on projects that are outside the "Housing First" umbrella, a doctrine that stipulates governments find housing and services for people right away, rather than requiring them to seek treatment first.

The move is the latest in a series of steps the Liberals have taken since targeting the country's poor, including the 10-year, $40-billion national housing strategy announced late last year.

The Liberals took a long look at the homeless program after hearing complaints from cities about cumbersome reporting requirements, inadequate funding and unrealistic expectations about how quickly the money should be spent. There were also limits to the program: federal officials admitted that the homelessness program alone couldn't address the high cost of living in some cities.

While the program has shown some signs of success by housing more than 6,000 people between 2014 and 2016, many cities complained they couldn't easily meet the program's requirement to spend money on "Housing First" initiatives.

The Liberals have loosened that requirement, saying they want to let cities best decide how to meet their local needs. Duclos said the government wanted to adjust the program to Canadians, as opposed to adjusting Canadians to the program.

"We're putting communities first and we're working around outcomes as opposed to programs," he said.

The new program puts a heavy emphasis on data collection, opening up funding to new ways to count and track the country’s homeless, which can be an elusive and challenging endeavour.

Duclos said more cities could use "by-name" lists, which give housing and homeless service providers a real-time view of almost everyone in a community who is homeless, what services are in demand and what services are missing.

— With files from Colin Perkel in Toronto