Downtown playground had been ‘problematic’ prior to fire 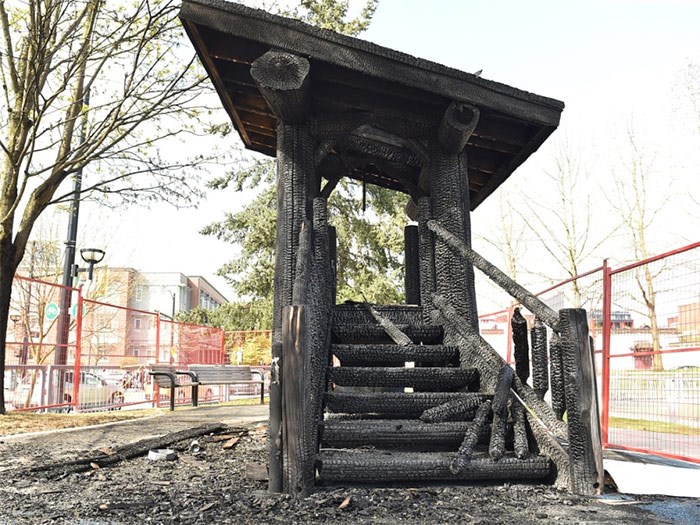 Vancouver Park Board already had plans to replace the playground at Andy Livingstone Park before it caught fire Friday morning.

Director of parks Howard Normann said staff had been planning to move the playground, which suffered extensive damage, to Douglas Park and replace it with a new structure. The new one is still 10 weeks away. He added that the damaged structure, which will be removed from the park in the next couple of weeks, had proved to be a problem.

“It was problematic just because of the design,” he said. “It was a beautiful little structure, people loved it. It’s just that it attracted people to sleep underneath it.

“Andy’s always a challenging park but I think we’ve done in the last year a really good job of helping people in the park understand that those structures aren’t for sleeping under that they’re used quite it a bit by kids.”

Normann said the park board had enclosed the structure in an effort to discourage people from camping under the playground. He added that the new structure will be steel and won’t be covered.

Someone had been camping under the playground on Friday morning but was asked to leave by park rangers.

“They had spoken to the individuals that were camping there,” Normann said, adding that they were cooperative and had moved on.

He said that the rangers were in another part of the park when the fire started. It was a resident that spotted the fire and called 911.

Vancouver fire public information officer Jonathan Gormick said firefighters were called at just before 6 a.m. and that investigators have determined that the fire is suspicious.