Local Cartoonist Raises $14,000 in ONE Day for Final Comic

What a day it’s been for Angela 'Jam' Melick, creator of the groundbreaking autobiographical comic series, Wasted Talent .
Nov 7, 2016 3:28 PM By: V.I.A. 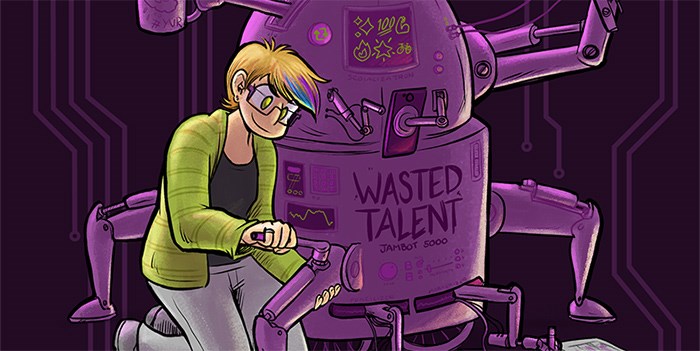 What a day it’s been for Angela 'Jam' Melick, creator of the groundbreaking autobiographical comic series, Wasted Talent. Today, the cartoonist, author and high-tech engineer announced she would conclude her hilarious and often personal comic series with two collected volumes alongside the comic's final online installment. To fund the printing of the final two collections, Melick has launched a Kickstarter campaign, which has already raised over $14,000 and shows no sign of slowing down. Things are looking good, but the project will only be funded if it meets its full goal by December 6, so check out the campaign and see if you might be interested in some of the awesome Wasted Talent perks.

For more than ten years, Wasted Talent has given readers an unprecedented view into Melick’s adventures in a male-dominated STEM field, it also shares stories from her personal life, including her quirky marriage to a mountain-bike-crazy programmer.