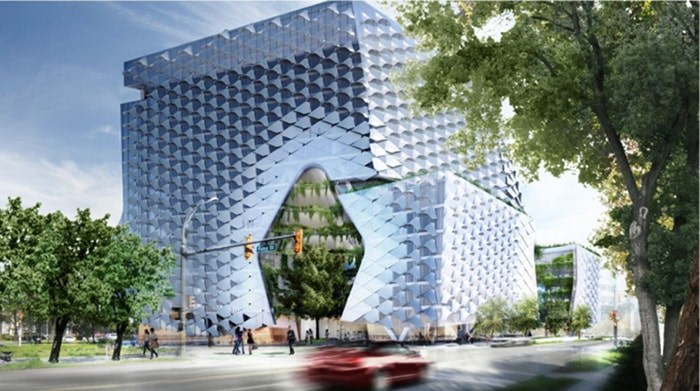 The new building, a.k.a. its “Store Support Centre,” will replace the company’s existing head office on Cornwall Street in Kitsilano, as well as three of its smaller satellite offices in Vancouver. The four offices are currently home to about 2,000 staff, but the company expects that number to grow to 4,000 by 2032.

Lululemon's rezoning text amendment application is asking for additional height and use permissions.

While the city has a policy that limits rezoning applications while the Broadway corridor planning process is underway, last April council granted Lululemon an exemption so it could proceed. The city’s director of planning recommended the exemption because no additional density is being requested and, as an office building, it advances goals of the recently completed False Creek Flats Area Plan.

If the application is approved following a public hearing, the new 13-storey building will include retail and café/restaurant uses on the ground floor.

Morphosis Architects, led by Thom Mayne and based in Culver City, Calif., is the design architect for the project, Francl Architecture is the local architect, Clive Wilkinson Architects is the interior architect and PFS Studio is the landscape architect. 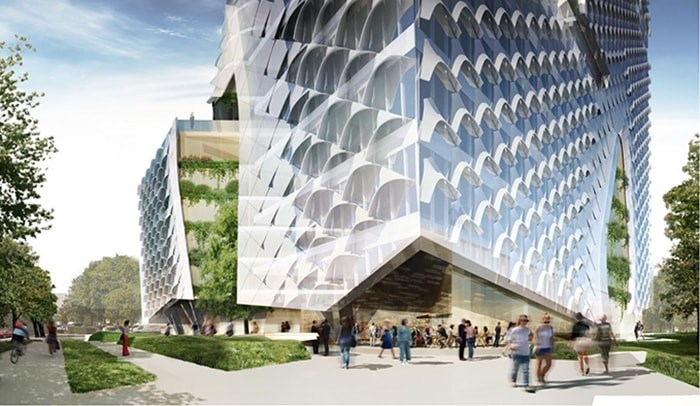 The building, which was “sculpted” to respond to site constraints, includes a central atrium and carved-out areas on its sides that feature greenery and create public spaces.

Robin Williams, project director at Morphosis, said while under current zoning they’re allowed to build up to 120 feet, they’ve lost a lot of area on the site because of setbacks and easements.

As a result, they need to go taller to achieve the allowable density on the site. The application requests an amendment to permit an increase in height from 120 to 215 feet.

“It’s a very deep, compact proportion of a site, so we really needed to bring natural light into the heart of the building to provide good daylighting to the office floor levels,” he told the Courier Thursday. “That means we need to go a little taller in order to create the atrium space in the middle of the building.”

The lower portion of the building facing Great Northern Way is set back to maintain a lower scale along that road, Williams said, while the shaping of the building aims to increase the view to the sky and the North Shore mountains, and create opportunities to integrate the landscape and terraces. 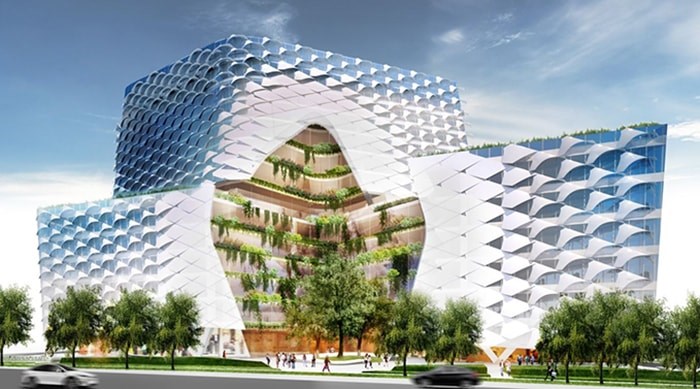 “We’re really using these carved moves to create public spaces along Great Northern Way and Foley Street for the main entrance of the building, which is off Foley Street,” he added.

Williams said the carved areas also help to “soften the shaping and the massing.”

Retail and café space on the ground level, meanwhile, is intended to help create a “lively and vibrant public realm” along Great Northern Way. The existing CD-1 bylaw doesn't permit commercial uses on the site.

The distinct exterior facade is the result of a “brise soleil” shading system.

If the planning and approval process goes smoothly, the building could be constructed and occupied by the middle of 2023.

The site, at 1980 Foley St., is between Emily Carr University of Art and Design and Mountain Equipment Co-op, and not too far from the property at Clark and East Sixth where Nature’s Path plans to build its new 10-storey head office by the East Van cross.

Lululemon’s Foley Street property was assessed at $79.4 million on the 2019 BC Assessment roll. The previous year, the site was valued at $49.4 million.