Charges have been laid against a Surrey couple in relation to a series of mail thefts that have plagued Tri-City residents for months. The recent charges likely relate to theft of mail in other Metro Vancouver cities as well.
0
Nov 9, 2018 6:56 AM By: Diane Strandberg

Charges have been laid against a Surrey couple in relation to a series of mail thefts that have plagued Tri-City residents for months.

Bags of mail and Canada Post materials stolen from community mailboxes and other residential mailboxes were recovered at a Surrey home Oct. 11 and a 49-year-old man and a 40-year-old women have been charged with multiple offences. 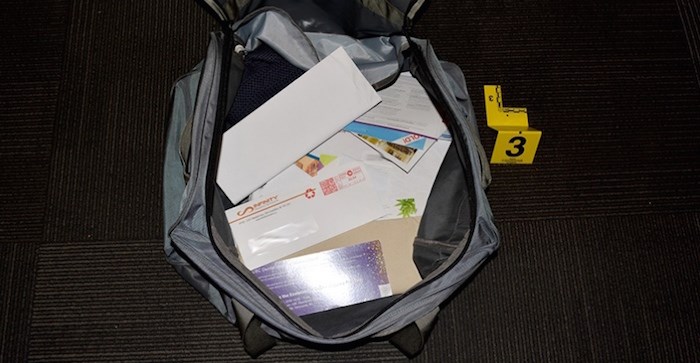 A bag of allegedly stolen mail was found at a Surrey home on Oct.11 and two people are charged with a number of mail theft offences. Photo courtesy Coquitlam RCMP

“The process of returning things has already started and it will continue,” said McLaughlin, who acknowledged that mail theft is a constant source of frustration and concern, with the recent charges likely relating to theft of mail in other Metro Vancouver cities as well.

He said Canada Post was a major part of the investigation.

“This was an effective inter-agency project and Canadian postal inspectors provided crucial expertise,” McLaughlin said in a press release. “Once a primary suspect was identified, the Coquitlam RCMP Prolific Target Team made the arrests and then used search warrants to gather a large amount of evidence.

"The suspects are believed to be responsible for a large number of identity and mail theft over an extended period.”

Mail theft is a common problem and police recommend people collect their mail daily, use Canada Post’s Hold Mail service to suspend delivery while away and file a change of address with Canada Post when moving as well as with banks and other financial institutions. As well, you can call Canada Post customer service at 1-800-267-1177 to report suspicious activity or if you believe your mail has not been delivered.