A man charged with setting fire to a Mason lodge in Vancouver Tuesday may have boasted about the crimes on his Facebook page.

This story has been amended to correct an error. The original version of the story stated the accused is a Vancouver resident. He is in fact a Richmond resident.

A man charged with setting fire to a Mason hall in Vancouver and suspected in the arson fires at two North Vancouver Mason lodges Tuesday may have boasted about the crimes on his Facebook page.

Benjamin Kohlman, a 42-year-old Richmond resident, was arrested and charged Tuesday with arson, assaulting a police officer, and flight from police, according to court documents.

Kohlman remains in custody until his next court appearance

The first two fires were set at the Masons’ Lynn Valley Lodge and the Capilano Lodge in Central Lonsdale in North Vancouver; the third, in Vancouver at the Mason hall at 4474 Rupert St.

On Wednesday, the Vancouver Police Department (VPD) identified Kohlman as the man arrested and charged with the Vancouver fire, noting further charges could be forthcoming.

“The two arsons that occurred in North Vancouver yesterday are still under investigation,” said Const. Tania Visintin, a media relations officer with VPD. “We anticipate recommending more charges to Crown counsel in the coming weeks related to the North Vancouver files.” 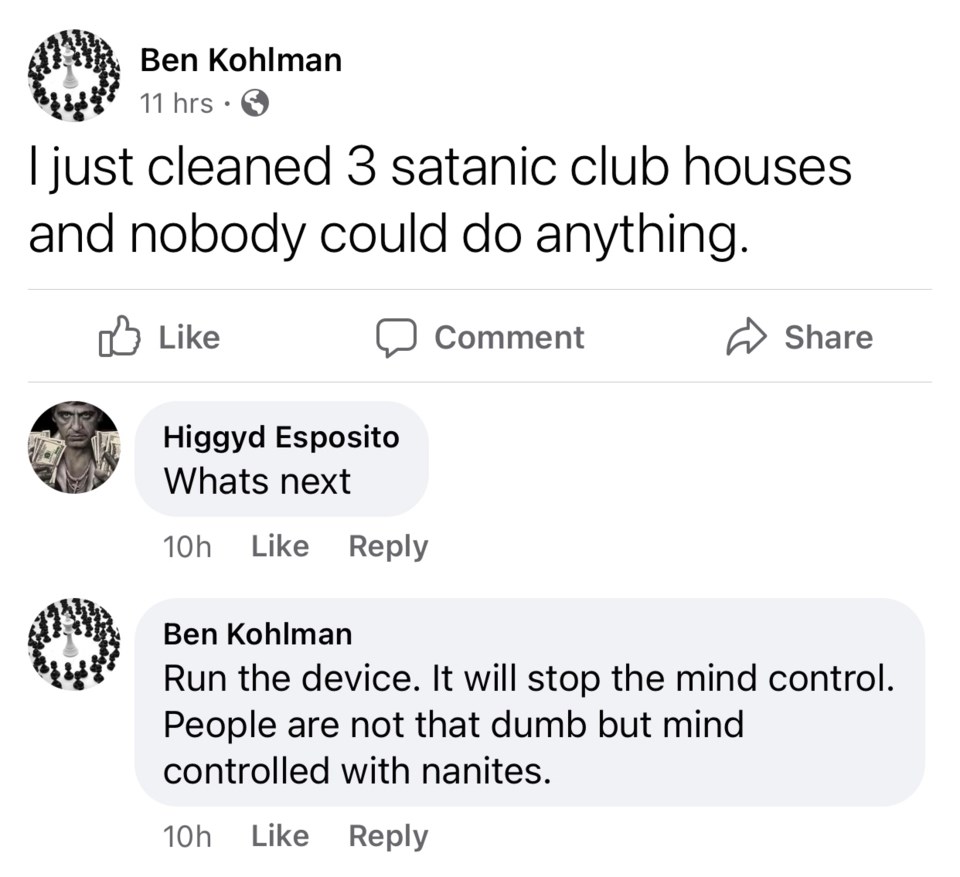 Kohlman was arrested just before 10 a.m. in Burnaby.

A response to Kohlman's post asks "what next?" to which Kohlman replied: "Run the device. It will stop the mind control. People are not that dumb but mind controlled with nanites."

The same Facebook account of "Ben Kohlman" of Vancouver includes a number of conspiracy theories and anti-Masonic sentiments.

"I'll bet the real Bible is hidden in the Vatican Library and the Bibles we see are corrupted," reads a post from early in the morning of March 30.

"The radio said that they can vaccinate 33 000 per day. The 33 means it's a Freemason conspiracy. I bet those things are full of nano tech to spy on the whole world," reads a post from Jan. 8 of this year.

Several of his posts are about freemasonry. "2019 Documentary on Freemasonry has been scrubbed from the internet along with most of other truth videos," he shared in December 2020.

Also in December, he posted about distrusting the media: "We should just stop denying ourselves and admit that Satanic secret societies control the news and lie every day. I mean it's obvious throughout Hollywood and politics. The word government literally means mind controllers. If you would just stop lying to yourself to make yourself feel better that this isn't actually happening then maybe we could do something about it. It is literally your fault that your children will be enslaved by technology because of your denial. Soon all money will be controlled by embedded microchips and the ability to purchase will be controlled by the Mind controllers who gradually strip you of all rights including international travel and recreational activities after work. We are good for building infrastructure and maintenance to them, that is all. Shut the news off, take your head out and look around. This is not because the government, the Rothchilds, Rockefellers, royals, and the like care about our well being. I know this falls on deaf ears but I have to say it anyways just in case some have the ability to reason. (Facepalm) It's hopeless!"

A video that was circulated on social media and by news organizations Tuesday shows a confrontation between an off-duty officer and a man carrying what appears to be a jerry can out front of the Mason hall at Rupert Street and East 29 Avenue around 7:30 a.m. Tuesday morning.

However, during Tuesday afternoon's press conference, Visintin wouldn’t confirm that the man taken into police custody that afternoon is the same man as in the video.

An off-duty police officer "did witness a man exit the building there, the building was partially on fire," Visintin said. "He confronted this man. A physical fight ensued."

The man got away, but the off-duty officer was able to call in the interaction to dispatch.

Visintin said Kohlman does have a history with police.

"He's had interactions with police and I think there is something for criminal harassment in his past," she said.

A person with the same name as the suspect charged in the arson fires does have several past infractions on record in British Columbia.