Here's what you missed at Margaret Atwood's speech in Vancouver

Margaret Atwood delivered a keynote address to the International Ornithological Congress in Vancouver on August 21st, 2018
0
Aug 22, 2018 11:26 AM By: Vancouver Courier 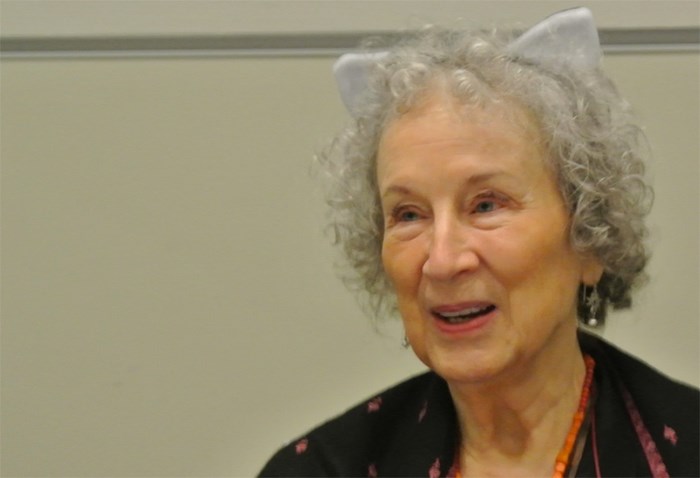 Margaret Atwood is the author of Angel Catbird, a graphic novel that seeks encourage people to keep cats — and therefor birds — safe by keeping cats indoors. Dressed in cat ears and and angel’s wings, she was the keynote speaker at the International Ornithological Congress in Vancouver. This photo was taken at a media event earlier in the day. Photo Martha Perkins

Why would Canada’s leading creative writer, Margaret Atwood, be giving a keynote address to the International Ornithological Congress? Even more intriguingly, why was she doing it wearing furry ears and a bird-cape costume?

The context for her August 21 speech was the conference at the Vancouver Convention Centre for many hundreds of scientists from around the world working on birds.

But this Congress is offering new initiatives to bridge the gap between academic science and the way ordinary folk feel about birds. The Vancouver International Bird Festival, timed to run concurrently with the Congress, is just one indicator of the shift towards integrating these viewpoints and treating them as complementary.

Other evidence lies in the list of awards announced at Tuesday’s “Canada Evening” ceremony. These mark work by ornithologists in conserving birds and increasing public awareness of the natural world.

Both Atwood and her partner Graeme Gibson have been honorary presidents of the Birdlife International Rare Bird Club and Gibson is the compiler of the Bedside Book of Birds. Atwood’s talk took its intriguing and varied illustrations of the intimate artistic links between birds and people from this book.

It is noteworthy that when it was first offered to publishers in the 1990s they could envisage no market for it, but its niche was more than ready when it came out in 2005. Atwood has done more than just bridge the gap between scientific and literary culture by moving into the world of the popular graphic novel in 2016. Angel Catbird (with Vancouver illustrator Johnnie Christmas and Tamra Bonvillain) has a superhero who combines the interests of humans, birds and cats. He combats a villain inspired by the destruction of island ecosystems by introduced rats. This is just one of the many tempestuous disaster scenarios that appall Atwood and to which she alerts the world.

However, she also offers three messages of hope derived from current conservation activities.

First, where non-indigenous rats can be eliminated from islands, seabirds come back and these birds in turn enrich the seas around them through their guano and increase fish stocks.

Secondly, we can best capture some of the excess carbon dioxide that affects our atmosphere by regenerating tropical forest. Many organizations are working to do this, including A Rocha, a Christian conservation NGO that has a project in Vancouver.

Thirdly, we are moving away from top-down schemes. These can create “conservation refugees” if people are moved off their land to prevent conflict with wildlife and fences are erected which disrupt animal migrations. In south-east Kenya, the indigenous population has devised an initiative, Nashulai Maasai, to integrate traditional knowledge with modern science. They allow wildlife to migrate freely and return to live in harmony with human neighbours.

Singing in the storm

In our own society, we need to do what we already know we should. Ditch plastic. Buy organic. And keep hoping. Fittingly, Atwood concluded by quoting another poet, Emily Dickinson, using one of those bird images we seem to find irreplaceable to express out deepest feelings:

Hope is the thing with feathers

That perches in the soul.

We need hope, to keep on singing in the storm. Atwood as Angel Catbird offered both commitment and hope, and inspired a standing ovation from the birdmen and birdwomen delegates.

Dr. Caroline Jackson-Houlton is a senior lecturer in English literature at Oxford Brookes University and avid bird enthusiast attending the 27th International Ornithological Congress in Vancouver. When Margaret Atwood received an honorary degree from Oxford of University, Atwood was asked what she and her partner Graeme Gibson would like to see during their visit. They requested a bird tour. Dr. Jackson-Houlton and her husband, the Rev. Dr. Andrew Gosler, an associate professor in applied ethnobiology and conservation, were among the group that took them birding.