Mark Brand outside his Save On Meats restaurant and butcher shop. Photo Dominic Schaefer The story of Save On Meats proprietor Mark Brand is evolving retroactively.
Sep 7, 2018 10:28 AM By: Bob Kronbauer 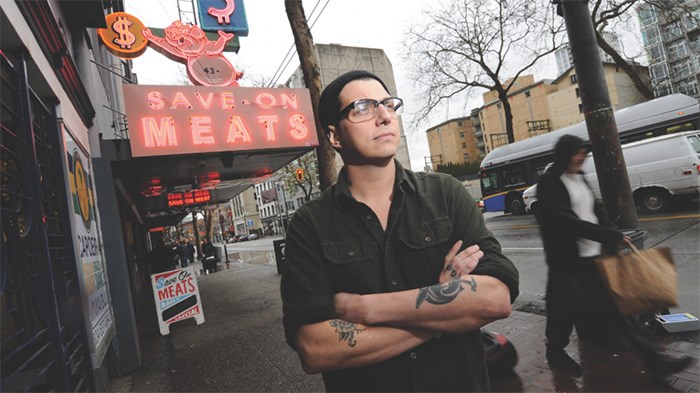 Mark Brand outside his Save On Meats restaurant and butcher shop. Photo Dominic Schaefer

The story of Save On Meats proprietor Mark Brand is evolving retroactively. He's now being framed in features published by international media as being previously "homeless" and an "addict".

A recent article in Vice's Munchies introduces him to the world as a "once-homeless" "former drug and alcohol addict". A Now This video which has gone viral with more than 2 million views shares the message that "being homeless inspired this chef to change lives with food".

This narrative is new, and comes as a surprise to media in B.C. (this publication included) who offered fawning coverage to Brand as he swooped into the Downtown Eastside in 2011 with a positive message and a reality TV show called Gastown Gamble.

He took over the iconic Save On Meats restaurant and turned it into a "social enterprise", then launched a charity within its walls called A Better Life Foundation, to much fanfare.

However the flood of positive local press seemed to dry up when lawsuits started coming in.

One in 2014 from food supplier Sysco Canada over unpaid invoices totalling $324,000 (a dispute Brand says has since been resolved). Writs of seizure and sale in the Federal Court of Canada over more than $425,000 in unpaid income and excise taxes in 2015. Then a lawsuit filed by Vancouver Community College for $300,000 over what they said were misappropriated funds they'd provided for a kitchen-training project.

Let's do some fact checking on the articles and this new narrative that's surfaced. 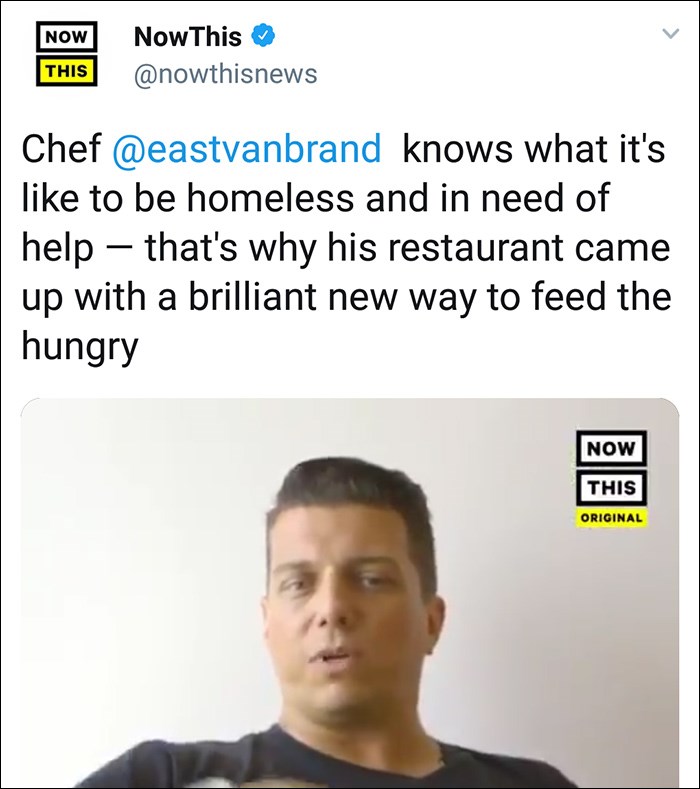 Now This promoting their video about Brand and his work. Screengrab

Was Mark Brand ever homeless?

Yes. Not how you traditionally think of "homeless people" or the stereotypes around them, but he definitely experienced it.

Brand tells us that as a teenager he was "unhoused multiple times" for short stretches, due to "behavioural issues coupled with a rocky relationship at home". He didn't choose to leave his house and in his teenage years "stayed overnight in 24 hour restaurants, stores, and bus shelters... waiting for the school day or for another place I could go." On occasion, friends would sneak him into their homes.

In his 30s he "spiralled with a booze and drug issue" and "ended up on a couch in East Van".

We spoke to the former close friend mentioned in the Now This piece. He's the one with the couch, and he tells us he offered it to Brand who then spent four days on it. He takes issue with the word "homeless" being used to describe those days that his friend spent in his home.

Brand also had a problem with the title at first but has moved past it. As he tells it to us he "initially had a super adverse reaction to seeing the title 'homeless' attached to my name as it was overstated and very open to interpretation, but after seeing the responses and amount of good it was doing, I put that to bed".

He's happy that "people who have never cared about homelessness, never felt okay to share their stories, never been inspired to do good, now are", citing the hundreds of positive responses he's seen to the new press and noting "we need to do everything in our power to bring people to this movement, to advocate heavily for helping each other out by any means."

What about being an addict?

None of the multiple people we interviewed who have been close to him argued that he hasn't had problems with addiction.

One person who knew him intimately corroborates that "In all the years I knew Mark, it was very clear he had serious substance abuse issues".

He can't point to one single event that provoked his decision to pursue this path but tells us he's been sober since November of 2016, that he's been working through it one day at a time, and that "it's been amazing."

The 2 million meals A Better Life Foundation touts on their website were funded by taxpayers. Money raised through the foundation is supposedly used to “supplement” them and make them healthier. Screengrab

Looking at the Vice Munchies and Now This pieces, or if you only spent a quick moment on the foundation's own website without digging in, you'd be forgiven if you thought they were footing the bill with money raised by their charity.

The meals that they cook for the less fortunate in their commercial kitchen on Hastings are mostly paid for using tax dollars, through contracts from non-profit housing organizations.

One that they work with is Atira Women's Resource Society. It pays the for-profit company Mark Brand Inc to supply food to 11 facilities that house women and children affected by violence. Currently 722 meals per day.

The money that pays for these meals is mostly provided to Atira by the taxpayer-funded government agency BC Housing. Your money, well spent on helping people who need it.

There are many catering businesses in Vancouver who provide the same service to non-profit organizations that house and feed people, only they do so quietly. The model that MBI and ABLF runs on is unique.

When asked if the "2 million meals" might be easily perceived by the public to be a direct result of A Better Life Foundation's charitable work, Executive Director Ash MacLeod (who also works as the Managing Director of Mark Brand Inc) responds "We frequently mention that it's through our partnership with Atira that we are able to provide these meals in talks, at every Greasy Spoon [a regular fundraising dinner] - 43 and counting - and in most media."

CEO of Atira, Janice Abbott, disagrees, telling us that she "would much prefer if [Brand] was clear in his story telling that he subsidizes the meal program and by how much, rather than implying" that his charity provides it in its entirety. She finishes by saying "Mark must be more transparent in his portrayal of this relationship." 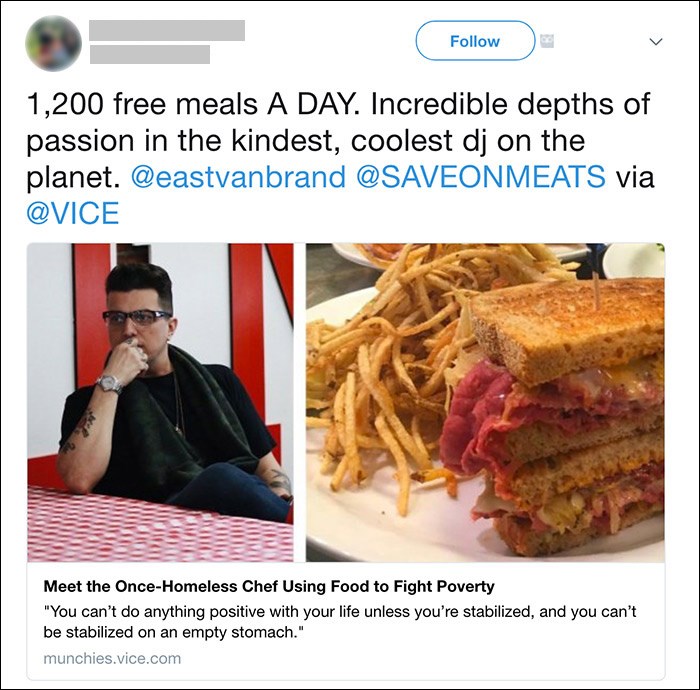 Some members of the public seem to be under the impression that A Better Life Foundation funds meals for 1,200 people per day. Twitter screengrab

Is A Better Life Foundation using money donated to them to "subsidize" meals?

Yep. But not according to what they've told the CRA.

Go through their annual filings to the Canada Revenue Agency and you may notice that the last time "Meal Program" appeared was in 2013. It was listed as 10% of their expenditures of $1,046, for a total of $104.60.

A "clerical error" is how Ash MacLeod describes the omission. He thanked us for finding it and assures us that their 2018 filing "will be accurate".

Is the meal program a success?

Atira's CEO Janice Abbott tells us that at $3.00 a meal, it's well worth the money. Other vendors have bid on the contract quoting $4.50-$5.00 per meal, so it would appear to be a no-brainer.

MacLeod says that they subsidize each meal by 50 cents, topping up the budget paid to Mark Brand Inc to $3.50 per meal.

The food is well received by the folks who are eating it. Janice says disgruntlement usually only has to do with the menu items themselves; "everyone loves hot dog days, there is less excitement about vegetarian meals".

The meals are well rounded, always include greens, and Atira directors say they get good response from Mark Brand Inc if there are ever issues. Save on Meats staff regularly meet with tenants to get feedback from them and make sure they're providing them with what they want and need.

In the end, those people and their needs are the only thing that matters.

With files from Jen St. Denis and Darryl Greer / BIV