A view from Prospect Point in Stanley Park. Photograph By Erik Andersen When Vancouver photographer Erik Andersen sees something he likes, his first instinct is to grab his camera and start shooting.
Sep 28, 2018 4:21 PM By: Elisia Seeber 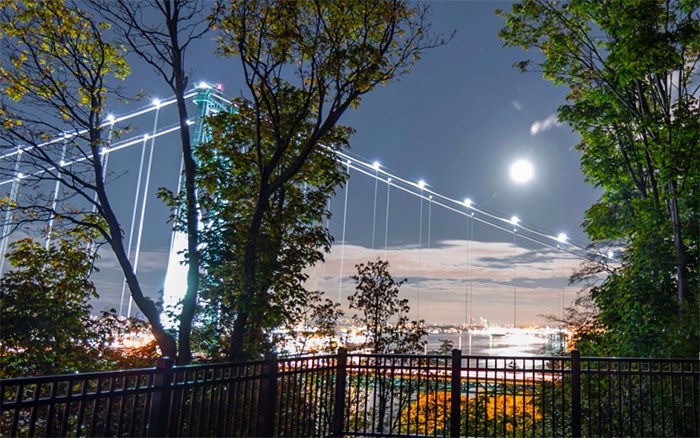 A view from Prospect Point in Stanley Park. Photograph By Erik Andersen

When Vancouver photographer Erik Andersen sees something he likes, his first instinct is to grab his camera and start shooting.

So when the moon began to peek through the clouds while he was at Prospect Point in Stanley Park on Sunday night, he couldn’t resist.

What resulted was a magical time-lapse video of the moon rising over Lions Gate Bridge.

"It’s a viewpoint I’ve seen many, many times but I’ve never really been taken by it," Andersen told the Courier.

"But on this occasion somebody else who was up at Prospect Point suddenly pointed and said: ‘Hey the moon is coming out.’

"I looked over and thought, ‘it looks so magical right now’.

"The moon was kind of appearing from behind the clouds."

Andersen said he often overlooked the spot because the trees and the bridge got in the way, but on this night all the elements of the scene pulled together perfectly.

In the time-lapse video, which was shot over 25 minutes, you can watch the moon rise slowly, the clouds shift and the bridge move up and down with the intensity of traffic.

"Everybody who walked out to the point where I was shooting, they all said the same thing, ‘Oh wow, that’s so nice!’

The Instagram video has already attracted more than 900 likes, since it was posted a day ago. If you’re on the gram, you’ve probably come across his striking photos of B.C.

More than 7,000 people follow his work via @erikandersen. And surprisingly, he said he’s only been taking photography seriously for the past few years.

"My background is as a wedding videographer," Andersen said.

"I’ve only really called myself a photographer for two years now, but I’ve done video for 10 years."

He said he had become more and more interested in creating an image that told a story in a glance.

"I come from a video background where you have to tell a story that lasts a few minutes," Andersen said.

"With photography, it is just one image and it just pops up on your phone and there it is. You can spend as much or as little time with it as you want."

Andersen said he enjoys highlighting the beauty of Vancouver to others.

"I just want to share my love of natural scenes, of light, of the city," he said.

If you haven’t had a chance to visit the location, dubbed ‘Vancouver’s unrivaled viewpoint,’ Andersen said it was worth it, not only for the sights but for the atmosphere too.