Rachel Greenaway's latest book in the series, River of Lies, was published in March.
May 9, 2020 5:04 PM By: Ben Bengtson 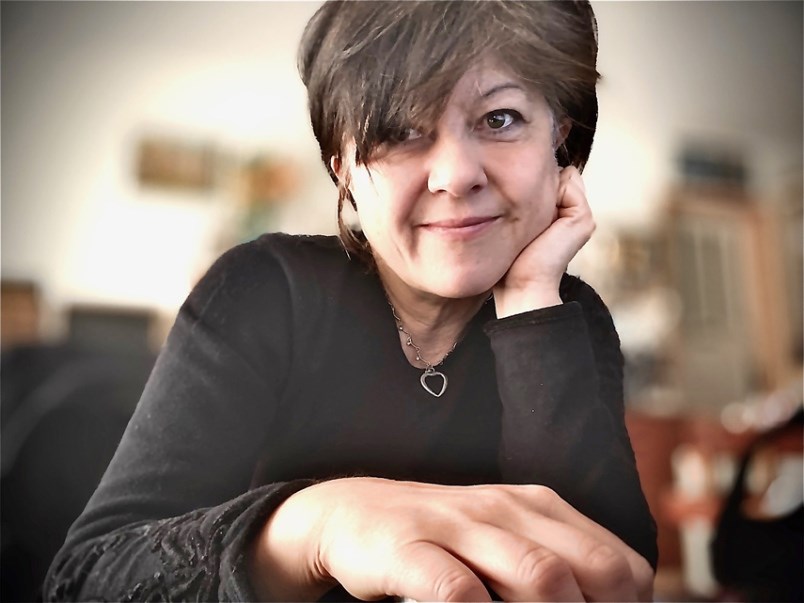 Nelson, B.C.-based writer Rachel Greenaway, who writes under the name R.M. Greenaway, is the author of a series of mystery and crime novels which largely take place in North Vancouver. photo supplied

From the courtroom to the writer’s room, her fingers never stopped moving.

Years before author Rachel Greenaway begun penning the thrilling tales of deception, lies and intrigue surrounding fictional North Vancouver police officer Cal Dion, she found herself recording the exploits of cops, criminals and everyone else in between in a much more judicious environment.

For almost 30 years Greenaway, who writes her B.C. Blues Crime series under the penname R.M. Greenaway, was a court stenographer based out of the courthouse in Smithers, B.C.

Born in England before moving to Toronto, Greenaway says the adventurous spirit of her hippie parents compelled them to move the family many places and numerous times when growing up, before they finally settled in Vancouver.

When Greenaway grew up and got her ticket as a stenographer – also sometimes referred to as a court reporter – the sense of adventure and freedom she was raised with kicked in. Greenaway moved her own then young family up to Smithers where she was able to essentially have free reign when it came to capturing the live testimony during myriad legal proceedings in the town, population 5,000, and the surrounding area.

“If I was down in the city you get put in one day here or one day there and you don’t get to follow the whole story. I was doing entire murder trials all by myself and I got to see a whole bunch of interesting stuff,” says Greenaway. “Everything from small claims to murder.”

Her tenure as a court stenographer taught her many of the ins and outs of police procedure and, whether she knew it or not at the time, gave her a hardy sense of the ways that criminals, cops and legal professionals speak.

But although she was immersed in cold, hard reality during the day as she recorded the court proceedings with a documentarian’s eye for detail, at night she would dream up stories equal parts macabre and entertaining, culled from her mind’s eye.

“I wrote a lot when I was a kid. I was a real introvert, it was just me and my thoughts,” she quips.

Greenaway had always read a lot of crime fiction throughout her life too, and, after working as a court reporter for years which ensured she was “immersed in dialogue day in and day out,” all of a sudden the story started coming to her in drips and drabs several years ago.

In her first book, Cold Girl, “smart urbanite” RCMP constable Cal Dion is forced to relocate to a station in the small town of Hazleton in northern B.C. following his own life-altering car crash.

Greenaway won the Unhanged Arthur Ellis Award for the novel in 2014, an award specifically designed to raise awareness for new up-and-coming crime writers. From there she landed a publishing deal.

At the end of that first novel, which saw protagonist Dion searching for the missing Rockabilly Princess, a local country-singing pop star, the fictional police officer is relocated back home to North Vancouver. The proceeding four books in the series – full of cold cases and hot leads – take place on the North Shore’s green landscapes and wet wilderness.

“I wanted to bring it back to the city, I wanted to write an urban series. So I set it in the place I knew from my childhood, which was North Van,” she says. “Ove rtime, I started to really like the setting of North Van. It’s a very different kind of city – but the setting’s so variable too.”

Her latest book in the series, River of Lies, was published in March. It features North Vancouver RCMP detective Dion and partner David Leith as they investigate the connections between an assault, a tragic drowning and an apparent suicide.

Amid descriptions of the Seymour River (“… coursing along below, dam-fed and tamed, but still famous for its beauty …) and “out-of-hand bush parties” that flow through the novel, Greenaway describes her own associations with the community as a child growing up in Vancouver.

She would often take the bus over to visit a friend who lived on Riverside Drive, describing their barefoot walks up the brambly road among decidedly less traffic and fewer houses than there are now.

“The Seymour is a beautiful winding river and we used to swim in it – and I almost drowned in it. It was scary. I got in over my head and I remember my friend’s mom was there and she kind of scooped me out,” she says.

Greenaway now lives in Nelson, B.C. She takes liberties with the version of North Vancouver she channels in her mystery and crime novels, she says, adding what’s important is capturing the feeling of the place.

“I go there as much as I can, but the traffic’s horrible,” she jokes.

She’s deadpan, however, when talking about the unfortunate practice of people getting their thrills by jumping into the Lynn Canyon watershed, especially as it relates to the motifs of running rivers and suspect drownings in her new book.

“Those people who jump off and how dangerous that is – I put that in there. It’s a background into the risks people take. There’s signs everywhere,” she says.

Although she largely chose North Vancouver as the setting for her novels for logistical reasons – she wanted to write about the RCMP and the City of Vancouver has its own police force – she’s grown to revere the North Shore beyond her associations with it from childhood.

And it’s about the people, not the inciting incidents, which keep her coming back to it.

“I write crime fiction, but I don’t think the crime is the big deal for me as much as just the way people interact. I’ve invented this team of characters and keep throwing problems at them and see how they deal with it.”