The father/daughter duo has spent the last few years tailoring sleep programs to help some of the continent’s top major league athletes
Aug 1, 2020 10:04 AM By: Alan Campbell 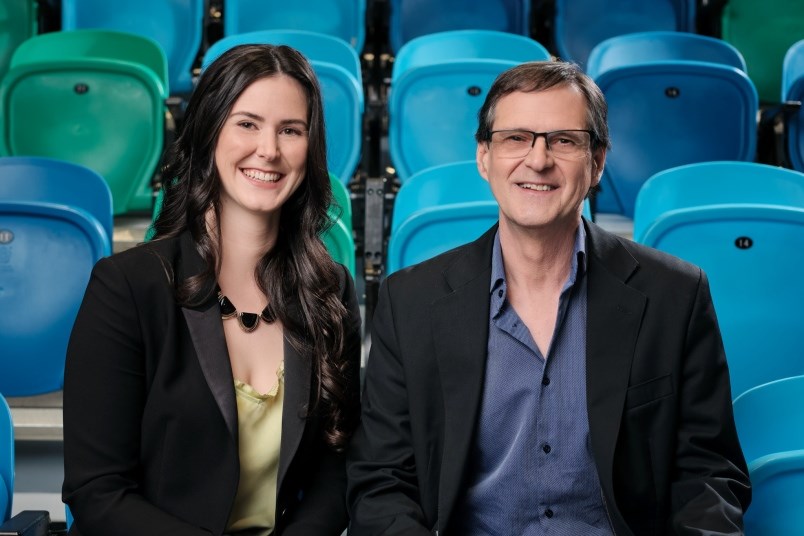 Sleep science specialists Suzanne and Pat Byrne have teamed up for their first book. Photo submitted

Now the Steveston father and daughter “sleep doctor” duo are putting all their accumulated knowledge and experience into their first ever book for everyone to see.

Pat and Suzanne Byrne said they decided to author "Inconvenient Sleep: Why Teams Win and Lose" because they realized there was a serious dearth in the general lack of knowledge out there about the importance of sleep patterns for athletes.

“Especially for myself, I would hear all kinds of different stories and methods from teammates (about getting to sleep),” explained Richmond-born Suzanne, 29, a former NCAA volleyball player and award-winning athlete.

“One of them stayed up all night and played a game the next day and we won. She thought that was the way to do it.

“(The book) is written for the sports world, showing them the issue itself and what goes on behind it. But it also has so much general knowledge for the public. (It’s for) anyone who’s interested in sleep really.”

Pat - who is understood to have implemented the first sleep program in the world for a professional sports organization when he was hired by the Vancouver Canucks in 2008 – acknowledged their work is cut out to get athletes to squeeze a sleep science into their already overcrowded schedule.

“We actually cover that in a chapter in our book,” laughed Pat, who was mentored in the field by a former U.S. military expert, while working at a company that made sleep watch technology.

“Sleep is still a new science.”

Indeed, it was while working for in occupational health and safety at WorkSafe BC for 21 years – focusing on sleep and fatigue as a workplace safety issue – that Pat first got the call from the Canucks.

“(They) asked if I could go and help them with their travel issues. I spent seven seasons with them from 2008,” said Pat, who has undergraduate degrees in biology and chemistry and a masters in biochemistry.

Between them, they have helped the likes of the Seattle Seahawks in the NFL and the Dallas Mavericks in the NBA, as well as teams in major league soccer and baseball.

“We measure the players’ sleep, as we have to know if they have sleep disorders,” explained Suzanne, who also studied law at Tulane University Law School and graduated with a sports law certificate.

“We tell the players how much sleep they need to maximize their performance and reaction time.

“We create a sleep profile, but it changes team to team. You could have a bunch of young guys who stay up late or others with kids at home who’re getting better sleep on the road than at home.”

In their book, the Byrnes also dispel a few myths surrounding sleep patterns and the devices/treatments out there on the market.

“The other myth is how much sleep people need. Instead of saying to a player, you need eight or nine hours of sleep, we say ‘let’s figure out first how much sleep you need to maximize your reaction time.’ That can be different for each player.

“We also use medical grade sleep watches, which are different from what you can buy over the counter.”

As for working together as a father and daughter on their first book, Pat said it was “totally fitting,” while Suzanne agreed, until she had to educate her dad.

“I explained that we have to citing everything in the book (such as studies),” she said.

“I don’t think Dad was happy when I started telling him he had to cite everything.”

The pair is still working with professional sports teams right now, but can’t say which as some organizations are sensitive about the word getting out.

“It’s taken as ‘we have an issue that needs to be fixed,’ so no one really wants people to know about it,” said Suzanne.

Their book comes out Aug. 18 and will be available from Amazon and widely available in eBook format.