For a brief, two-hour window Wednesday morning, there was no talk of government dissension, a horrible hockey season or an affordability bubble that’s crippling the middle class.

All the warts and faults that can be found in Canada, or any western democracy, were invisible.

Instead, there was joy, boundless optimism and hope. 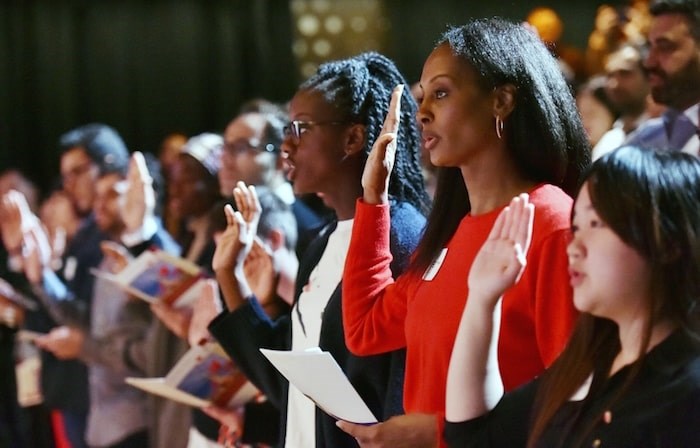 Hope can be a fleeting thing when you can’t wear what you want, talk to whom you want or say what you want — all while the threat of bombs falling upon you is a very real possibility.

Along with 35 others from across the globe, Setayesh Gholipour became a Canadian citizen at the BMO Theatre Centre in Olympic Village on April 3.

At only 18 years old, her words cut deep.

“It is really hard to be a woman in my home country, but here I get respect. I get treated equally,” she said. “I didn’t feel confident in Iran. I couldn’t stand what other people put me through. They would tell me what to do. I don’t want to be forced to do something I don’t want to.”

Gholipour graduates from Port Moody secondary this year. In the seven years she’s been here, she’s learned English from the ground up and formed a peer group.

Not once, she says, was her lack of English or knowledge of Canadian customs mocked. And she gets to wear what she wants, when she wants. On Wednesday, she wore a flowing white dress.

“The way that you dress [in Iran] is really bad,” Gholipour said. “It’s 45 C and you have to wear a hijab and clothing so that none of your body parts were out. I like to wear dresses, I like to wear shorts.” 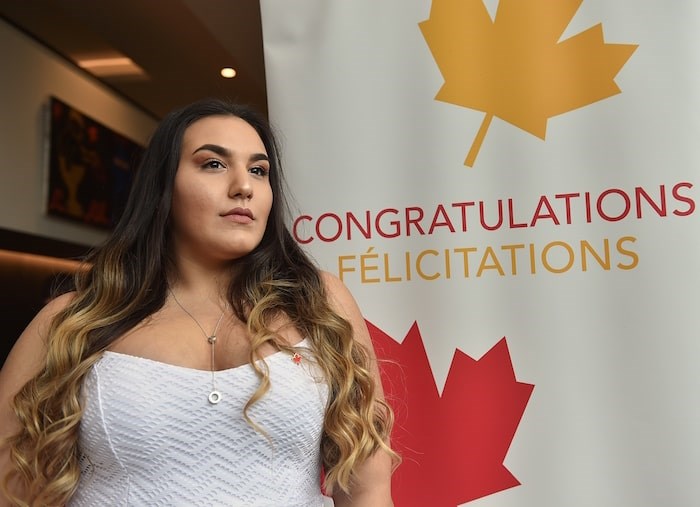 Setayesh Gholipour became a Canadian citizen at the BMO Theatre Centre in Olympic Village on April 3. Photo by Dan Toulgoet

Kehinde Esan was the epitome of optimism Wednesday. Born in Nigeria, he’s been in Canada for four years, first in Calgary and now Richmond for the past two years.

He’s trained in international commerce and works as a financial analyst for a software firm in the Garden City.

“It’s a good day for me and I can’t really explain how I feel, I can’t quantify what’s in me,” Esan said. “If my heart is opened and everyone could see through it, you would see it is full of joy. From the depths of my heart, I will always cherish this day.”

Soccer, or football, as he calls it, is Esan’s game. He’s slowly taking to hockey and “loves the tenacity of the players.”

Another thing he loves? Eating Mexican, Korean and Japanese food all in the same week. Clean streets and proper infrastructure may not be sexy talking points to your average Vancouverite, but they are a revelation in Esan’s world.

“Looking at the scenery is so much fun for me,” Esan said. “I can see clean, neat, well-lit streets. This is what I enjoy. It may not make any difference to others, but to me it is quite significant to my enjoyment level here.”

Seventeen countries of origin from virtually every continent were represented during the two-hour ceremony. A sizeable contingent of Americans was represented as well. 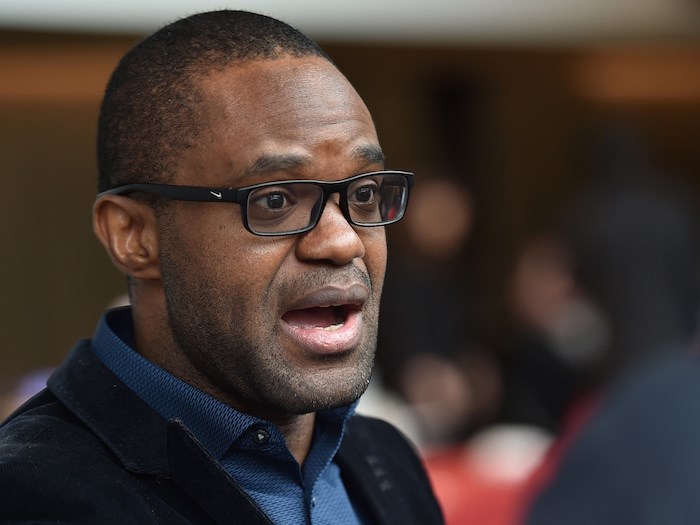 Kehinde Esan became a Canadian citizen at the BMO Theatre Centre in Olympic Village on April 3. Photo by Dan Toulgoet

Citizenship judge Carol-Ann Hart led the formal part of the proceedings, which included reciting an oath and a singing of "O Canada."

She implored Canada’s newest to enjoy and protect our environment, to participate in arts and culture and to run for public office. Hart invited them to learn both French and English and to learn from Indigenous cultures across the nation.

Hart also spoke of those who came before, some who remain and others who died in conflicts. Her father, Edward Clayton Hart, is a veteran of the Royal Canadian Navy. His aircraft carrier was sunk in the north Atlantic during the Second World War.

“At the age of about 18, my dad found himself in the icy waters hoping for help. I’m very pleased to tell you that he is 95 years old and ‘alive and kicking’ as he likes to say. He’s very proud to have served his country,” Hart said.

Given the ceremony’s locations — one of three Arts Club stages in Vancouver — foreign-born actors were invited to share their stories as well.

Anousha Alamian was born in Iran right around the time of the revolution in the late 1970s and lived through eight years of war.

“During that time, our family — mom, dad and two siblings — moved from city to city to avoid the bombings,” said Alamian, now an accomplished actor. “At one point while we were on a plane flying to another city, our plane was attacked and almost shot down. That’s when my parents decided our family had to leave.”

The family arrived in Montreal in 1991, and Alamian became a citizen in 1995. He speaks fluent French and English and has a lengthy TV credits list that dates back more than a decade.

“Unity, respect for others, tolerance towards other cultures and languages was what I learned in my first year in Canada,” Alamian said. “This is what I continue to cherish because this is what Canada is about and this is what being a Canadian means to me.”