The construction site at Smithe and Richards streets will turn into a park with bridges, a three-story play area, hammocks and more.
Jan 7, 2021 4:31 PM By: Brendan Kergin 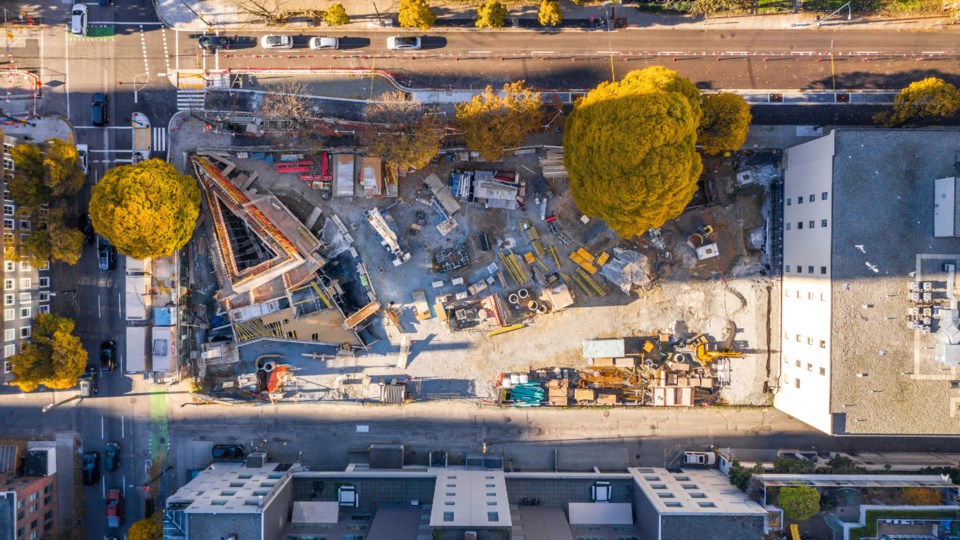 A drone shot of the new park being built at Smithe and Richards shows how the site looked late last year. Vancouver Parks Board

The city is aiming to open its first new park in downtown Vancouver in nearly a decade this spring.

Ground broke a year ago on the 0.8-acre site at Smithe and Richards streets; the hope is to open it in April or May says Alexandre Man-Bourdon, a senior project manager with the Vancouver Parks Board.

"Things have been going quite well so far, but we don’t know what challenges are ahead," he says.

The city has already faced some challenges and the $13.8 million project is overbudget Man-Bourdon notes. That's due to unforeseen site conditions below the surface; while the site was most recently a gravel parking lot buildings stood there before. An exact number isn't available he says, since the project isn't finished yet.

While not a big park, Man-Bourdon explains it's a much more complex park than what people might have in mind. The city is trying to fit a lot into a small area since land for parks in the city's core is scarce and there's a lot of different interests looking to use park space.

"It needs to be robust, so it can handle that day-in-day-out traffic," he notes, explaining that 10,000 people could move through the yet-unnamed park in a day.

Passers-by to the site should keep an eye out in the next little while as large-scale pieces begin to show up.

"We’ve got a few months left in the construction," Man-Bourdon says. "The site is going to be changing really quickly."

The much-discussed bridge structures, which will cross above the park and give it more square-footage are being built in Surrey; soon spans ranging from 60 to 100 feet will be lifted into place. They'll have lights and a pair of hammocks installed, as well.

Sky frames are also coming, structures 20 m to 30 m high; they'll create a sort of ceiling to the park. Man-Bourdon notes a pair of bike lanes will flank the park as well, to separate it from vehicle traffic.

Other features will include a large playground (with a three-story play-structure) and a water feature that will recycle water (water used in the feature will then go to the toilets in the cafe). While there won't be a field, some trees are planned, to attract birds and pollinators.

Currently, the site is being referred to as the Smithe and Richards Park, but Man-Bourdon says a process is underway to name the new park.

Funding for the park came from development cost levies.