New light, sound installation lets you have a dance party in Ackery's Alley

Photo Melissa Shaw A new public art installation has opened in Ackery's Alley next to the Orpheum in downtown Vancouver. The installation is called FIELD and relies on public participation to activate 35 squares of light to create music.
0
Aug 9, 2018 10:44 AM By: Melissa Shaw 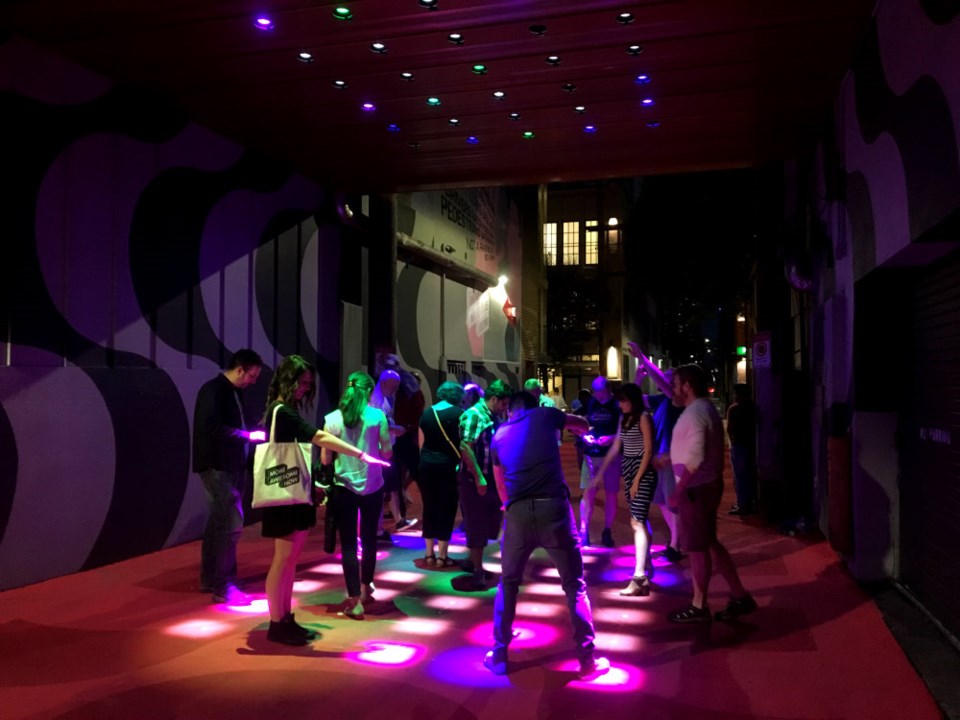 A new public art installation has opened in Ackery's Alley next to the Orpheum in downtown Vancouver.

The installation is called FIELD and relies on public participation to activate 35 squares of light to create music.

FIELD was created by internationally renowned artist Alex Beim of Tangible Interaction, the same group behind OH! -- the free interaction art installation that allows people to control the lights at Science World.

"I wanted to create something that was quite orchestral. That in a way reflected what happens inside the Orpheum theatre but for anybody to enjoy and to feel that they can make music too," Beim says.

The musical arrangement was created by Vancouver-based composer Adam Lastiwka and incorporates motion sensors that control the lights connected to a computer.

FIELD has been under development for about a year and installation will be active from 7 p.m. to 10 p.m. every night.

The project was managed by the Downtown Vancouver Business Improvement Association (DVBIA) and is part of an initiative called More Awesome Now, which is a collaboration with HCMA Architecture + Design and the City of Vancouver.

Charles Gauthier, president and CEO of the DVBIA, says FIELD will continue to change the way people in Vancouver see public space. "Why can’t a lane be used for garbage collection in the early hours of the morning, commuters on their way to work, morning deliveries and dancing, selfies and socializing in the afternoon and into the night?”

The DVBIA raised $64,736 from 428 backers on Kickstarter to help fund the project.

This is the second of three reimagined laneway projects with the first being Alley Oop near the intersection of West Hastings and Granville Streets.

The three projects are funded by the DVBIA and a grant from the City of Vancouver for a total budget of $200,000.

The alley is named after Ivan Ackery, who managed the Orpheum Theatre from 1935 to 1969.

There is a public launch event for FIELD on Thursday, August 9, from 7-9 p.m. that will include music by Public Disco and surprise pop-up performances by the Vancouver Street Dance Community.