Two newborn kittens have died after being found in a plastic bag abandoned in a Vancouver dumpster. They were suffering from hypothermia and dehydration.
0
Apr 24, 2019 12:26 PM By: Vancouver Courier

One of the kittens found in the dumpster. Photograph By BC SPCA

Two newborn kittens have died after being found in a plastic bag abandoned in a Vancouver dumpster.

The one-day-old kittens were suffering from hypothermia and dehydration when they were found on April 19. They were rushed to an emergency clinic for treatment but could not be saved.

The BC SPCA is seeking the public’s help in solving the case.

The SPCA said it was alerted to the kittens by a passerby who heard sounds coming from the dumpster located inside a secured parking area at 1040 Pacific Street.

“We responded immediately and transported them for emergency care, but sadly they were too weak and compromised to survive,” said Eileen Drever, senior officer of protection and stakeholder relations for the BC SPCA.

“This is an absolutely heartbreaking case, where two innocent animals were thrown out like trash to die.” 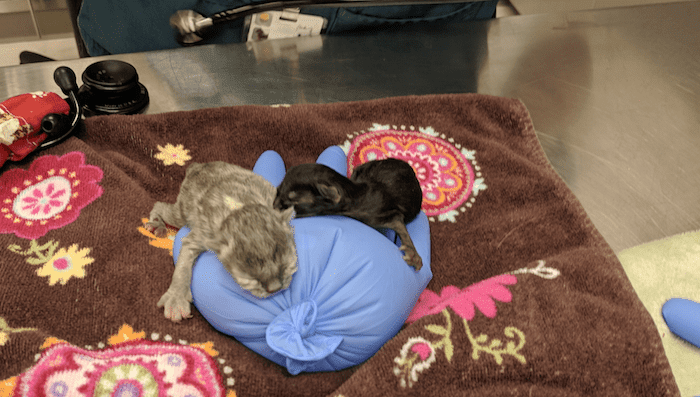 The kittens found in the dumpster – BC SPCA

Drever notes that the kittens were tied inside a plastic shopping bag that ironically read “Love You.”

“We urge anyone who cannot take care of an animal to reach out to their local SPCA or rescue group for help – there is always support available,” Drever said.

“Animals are not disposable and there is no reason to cause an animal to suffer and die in such an unnecessary and inhumane way.”

She also said it is important for people to know that abandoning an animal is against the law and individuals can be prosecuted for their crime.

Anyone with information relating to this case is asked to please call the BC SPCA’s toll-free hotline at 1-855-622-7722.