Nicholson Road is part of an ongoing photo project aimed at sharing and celebrating the different communities in Metro Vancouver.
0
Jul 25, 2011 12:34 PM By: Robert White 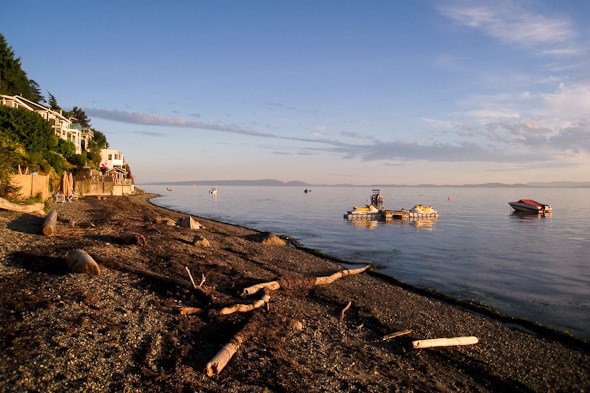 The saying goes, that for every 1 day of sun blessed upon Vancouver, Tsawwassen receives 3. I'm thinking that's a pretty good deal for summers like this one, and it's pretty evident when you see the healthy palm trees all over town. It's also perfectly clear why people love sunny Tsawwassen when you find a place like Fred Gingell Park.

Originally constructed in the 1950's, the site is part of the BC Hydro ROW, where power lines from the English Bluff Terminal head underground, down the oceanside cliff, and into a submarine cable network to connect the San Juan Islands, the Gulf Islands, and Vancouver Island to the power grid. If you pay it a visit, you'll notice the large towers (the recent upgrade of which caused a bit of a stir) at the terminal across the street, as well as the large 3-story warning sign and ventilation shaft down at the beach.

It wasn't until 2001 that the Delta Parks Board found the opportunity to turn the site into a beautiful little park complete with beautifully maintained lawns and gardens, a small winding path, a lookout platform with information panels describing the Tsawwassen Ferry Terminal and Roberts Bank Superport (ever wonder what those bright lights are south of the airport, as seen from Vancouver on a cloudy night?), as well as the more prominent landscape features and islands across the straight. They also created steps and staircases to let visitors descend the 50 metre-high cliff (the highest point in south Delta). This first public access point to the Tsawwassen Beach created a little bit of controversy as well, as the area along English Bluff Rd is locally known as a sort of "Marine Drive of Delta", as it's lined with million-dollar mansions and private roads/estates. And given the area and the views, it's not hard to see why!

Also, if you're wondering, the park was named after the late, local MLA Fred Gingell, a very well-respected and active member of the community, with a long history of community service. He was even the head of the 1987 BC Summer Games. With that in mind, the painful ascent up the stairs from the beach made perfect sense! (Many enjoy a workout of 10 trips to the beach and back. Now I'm not in poor shape, but I was having a tough time with the last 30 (vertical) feet of my first round-trip! Them's some steep steps.)

Of course I can't end this post without giving you this tip: Tsawwassen, meaning "the land facing the sea". To spell it, think of it like "saw was sent", with the T carried to the front. And if you're not sure how to pronounce it, think of the first "tsa" as one character/one sound rather than three, then add on the "-WAH-ssen". Some areas neglect the "t" entirely, and some totally ignore the "s". In fact, it used to be pronounced closer to "tse-wathen”, as per the Tsawwassen First Nation. Now you'll be a pro when someone asks you where you've been! :)

Goodbye, Sun: Vancouver forecast calls for rain every day for the rest of January
Jan 22, 2020 4:05 PM
Comments
We welcome your feedback and encourage you to share your thoughts on this story. We ask that you be respectful of others and their points of view, refrain from personal attacks and stay on topic. To learn about our commenting policies and how we moderate, please read our Community Guidelines.